Firearms stores in the separatist-held city of Donetsk in east Ukraine stand empty, the guns that once lined the shelves now sold out or stolen at gunpoint.

"In a time of war, everyone wants a weapon. There are just none left to sell or even give away," said manager Alexander Lutsevich in the wood-paneled office of his downtown store.

The ousting of local authorities in east Ukraine by pro-Russian rebels, and a flood of weapons into the region, have led to a breakdown in law and order that further complicates Kiev's efforts to reassert control.

The rebels, who oppose the pro-Western authorities in Kiev, count on the local population for support, but some residents and local businesses are angry that the power vacuum is allowing criminals to thrive.

German wholesaler Metro became the biggest victim in May when rioters broke into the store and looted it after fighting around a nearby airport.

Pictures were posted on the Internet of people wheeling goods away on shopping carts and stories spread that looters had emptied the store's liquor section in a matter of hours.

Metro spokeswoman Olesya Olenytska said security concerns had prevented the company assessing damage at the store, which has been closed since May 26.

The leadership of the self-proclaimed Donetsk People's Republic, or DNR, which describes its armed uprising in terms of democracy and self-determination, is aware of the dangers of being associated with lawlessness in parts of the region.

The rebels' regional prime minister, Alexander Borodai, has threatened to punish people who brought stolen goods from Metro to DNR headquarters as well as those extorting money from people and businesses in the name of the self-styled republic.

"In some residential areas of the Donetsk People's Republic, there are various gangs that are using the symbol of the DNR and my name to extort a 'tax' from individuals and businesses," he told reporters. "In fact, they haven't even the slightest thing to do with the DNR."

Days after the Metro incident, a group of heavily armed fighters arrived at rebel headquarters in Donetsk to clear the building of looters and stolen goods.

Ukraine's Interior Ministry has halted deliveries of commercial firearms to Donetsk, where the rebels have stripped police of their weapons. Deliveries have likewise been stopped to the neighboring rebellious region of Luhansk.

Lutsevich's Kiev-based company, IBIS, had sent its rifles and handguns back to company stockpiles.

"We had to do it so the temptation did not arise to come in and take them by force," he said.

The separatists rose up in east Ukraine in April following the overthrow of a president sympathetic to Moscow and after Russia's annexation of the Crimea peninsula.

Ukrainian President Petro Poroshenko is pressing ahead with a military campaign against the rebels after a ceasefire intended to give peace talks a chance expired.

Outside the city of Donetsk, people in rural areas have lived in grinding poverty for decades — a motive for some to take up arms against Kiev — but some fear crime now threatens to rob them of what little they have.

Manning a separatist checkpoint outside his hometown of Druzhkovka, former firefighter Stanislav, 52, rattles off a litany of lawlessness in recent weeks: a pharmacy robbed, a gas station held up, water pipes stolen.

"In times like these, criminals start coming out of the woodwork. We need someone to look out for security, some kind of order," he said.

In sleepy Druzhkovka, people say the new self-proclaimed leadership has brought with it the threat of increased crime, even though crime had long been a problem.

"These people, they are not just militants. Lots of people have got their hands on weapons and they act like they can do whatever they want," said Sarhan Avdev, a migrant from Azerbaijan working in a cobbler's store, as he hammered nails into a pair of women's sandals.

Inside a Unicredit bank branch, a woman who gave her name only as Tatyana said the violence had made it more difficult to restock cash machines, leaving long queues outside banks.

"If there is no authority, no one to answer to, people try to take advantage of the situation, steal, loot," she said standing next to a cash machine covered with a sheet of paper that read "No Money". 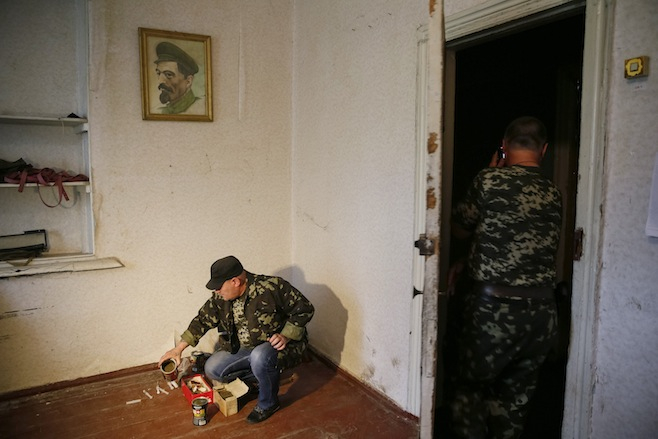 A member of a group of separatists shows drugs and syringes, which he said were taken from local residents, under a portrait of Soviet-era secret police chief Felix Dzerzhinsky, inside the office of a rebel commander who calls himself Vostok (East), in the town of Druzhkovka, Donetsk region.

Donetsk has long had a reputation as a haven for criminals, especially in the first few years after the fall of the Soviet Union in 1991, when organized crime was rampant and rival gangs fought for power and influence.

Donetsk province had more registered crimes than any other area of Ukraine, some 48,500 in 2012. It also had more people involved in organized crime than any other region and the murder rate far outstripped the rest of the country, according to the Ukrainian statistics office.

Slovyansk, a flashpoint for violence, was on one of the biggest drug-trafficking routes, said Albert Nikiforov, a former Donetsk police officer in charge of cracking organized crime.

The extreme wealth that came with the drug trade allowed crime bosses in eastern Ukraine to travel the globe in the 1990s buying up property and opening Swiss bank accounts, he said.

That was until former Ukrainian President Viktor Yanukovych, who ruled the region as governor from 1997 to 2002 and later became president, imposed order on the crime world, finding a delicate balance between business and political interests.

Nikiforov said the recent violence had upset the balance: "Organized crime has been thrown into disarray by the events and all that's left are common criminals and looters."

The separatists accuse law enforcement officials of corruption and turning a blind eye to crime. One rebel commander who calls himself Vostok, or East, has, like other leaders, disarmed the local police.

He set up joint night patrols grouping officers in uniform and fighters who wander the streets in camouflage fatigues carrying assault rifles.

Sitting in his spartan office, a portrait of Soviet-era secret police chief Felix Dzerzhinsky gazing from the wall, Vostok said crime had dropped in the city since he took command.

But he added: "People have lost the understanding of what is permissible and what is not … Some cannot fight the temptation to take what is not theirs while they believe there is a lack of authority in the city."