St. Petersburg — Mikhail Gorbachev, the general secretary of the Communist Party of the Soviet Union and a political reformer, was once supposedly asked to clarify what he implied when he used the term "perestroika" to describe his political reform.

In response, Gorbachev pointed to his famous Soviet Raketa watch and said, "It means that life in Russia is starting from scratch!"

Gorbachev had a reason to point at his watch since the number at the top of the face did not start with the traditional number 12 but instead with the number 0 — a unique characteristic of Raketa watches, particularly for its "Petrodvorets Classic" model.

Raketa, which means "rocket" recently reopened the doors to its museum, under the direction of French businessman Jacques von Polier, where you can see legendary watches worn by Soviet leader Leonid Brezhnev, items made for the Summer Olympics held in Moscow in 1980 as well as items dating back to the time of Peter the Great.

The reopening of the museum is another sign of the revival of the once leading Soviet watch-making plant, which fell into a steep decline after the breakup of the Soviet Union. Von Polier aims to make Raketa "Russia's number one lifestyle brand worldwide."

"Raketa and Pobeda will be for Russia like Hermes and Chanel is for France," von Polier said in an interview with The Moscow Times.

"Technically, Raketa is one of the top five watch manufacturers in the world, producing all of the parts itself, including hairsprings and escapements. The new automatic model, which was released this year, is in the process of getting the most prestigious Swiss certificates of quality. This would be the first time that a non-Swiss-made watch has received such certifications," he said.

Since then, the company has had a long and winding journey: from being one of the leading watch factories from the 1960s to 1980s, then experiencing a decline in production during the collapse of the Soviet Union in the 1990s, and now a gradual but steady revival. 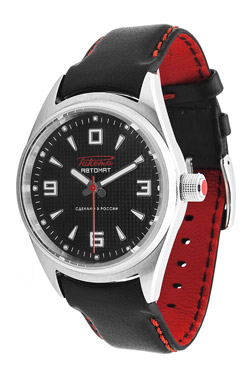 A Raketa watch with O at the top.

Von Polier bought the company in 2009. "I was always sad to see that Russia had no brands like Louis Vuitton, Hermes and Chanel, despite the rich culture and history of the country. When I found out about the Petrodvorets watch factory I straight away thought that this was a unique opportunity to make a 'Russian Hermes,'" he said.

The history of the company dates back long before the Soviet period back to 1721. Initially, it was founded by Peter the Great as a lapidary factory, processing precious stones. Vases, statues and other ornaments made at the factory are currently kept at the State Hermitage Museum.

Then during the 1870s, the plant was used to produce pieces made of marble for St. Isaac's Cathedral. In 1895, it began the production of pocket watches for the Thalberg brand. In 1927, it produced the plate for Lenin's mausoleum and in 1934 the famous ruby stars for Kremlin.

Museum visitors will also be able to see, and even buy, watched including one designed by Russian model Natalia Vodianova. The dial of the watch is decorated with outlines of a red star laid out with Swarowski crystals, with the names of famous world cities, all located in different time zones, written around the outside of the watch. On the underside of the watch is an engraved heart, a symbol of Vodianova's children's charity, the Naked Heart Foundation. Proceeds from the sale of the watches are donated to the charity.

Other famous Russians who have teamed up with Raketa include Russian-American couple Vic Wild and Alena Zavarzina, Olympic medalists in snowboarding at the recent Sochi Games. In 2013, Wild became the director of the Raketa strategic creative studio in Moscow, where he is now developing a new design of the watch model called "White Nights."

Many of the newer Raketa watches still use Soviet design as a basis when updating overall design and mechanics.

An example is the famous Raketa polar watches, with its trademark dial showing 24 hours. The first of these were produced in 1969 for people working in the Arctic Circle. In 2014, the Raketa plant reproduced the same watches but with a more modern look.

"With the new watch models, we now offer improved body parts and a variety of colors," said Anastasia Yakovleva, a spokeswoman for Raketa.

This year, they also released a modern version of its "Amphibia" model, a waterproof watch for divers first made in 1971. The factory has also updated its "Petrodvorets classic" model, still leaving the number 0 in place of the 12.

In 1945, the Raketa plant began producing watches under the brands "Zvezda" (Star) and "Pobeda" (Victory) in honor of the victory of the Soviet Army over Nazi Germany. Recently, the company also bought the exclusive rights to manufacture "Pobeda" watches.

The entire production cycle of Raketa watches takes place in Russia. The factory is particularly proud of manufacturing balance springs. Currently only eight companies in the world produce balance springs, each in a slightly different way. The technique Raketa uses is so secretive that access to view this section of the factory is limited, with photos forbidden.

This month Raketa launches a new model called "Rocket-automatic," a self-winding watch, which runs using the movement of its owner.

"Young Russians are often interested in patriotic themes, like wearing items with Russian symbols. Therefore, in our collection, we have included a mechanical watch model with the inscription 'Russia' on it," Yakovskeva said.

Such patriotic trends are not new however. In the late 1980s the plant produced watches with the words "KGB," "Soviet Perestroika" and "U.S.S.R.-U.S.A." on them. The words echo a time of glasnost and perestroika, the latter is unlikely to be revived in such a time of tension between Russia and the U.S.

Although the Russian market is a priority for Raketa, von Polier said the company hopes to start looking for distributors in Europe, Asia and the U.S. by the end of 2014.

"Demand for a Russian-made brand loaded with history and knowledge is strong and growing every day," said von Polier. "As unexpected as it seems, we have already started to export our watch parts to Switzerland because Swiss watch companies are having difficulties in producing the most complicated parts, such as the hairspring and escapement. Who would have thought, that Swiss watches would one day have 'Made in Russia' parts inside."