On June 11, the office of Novosibirsk Mayor Anatoly Lokot approved a request by the Christian groups to hold a protest against Manson's concert, and the city administration has said it is considering their request to ban the concert outright, making it seem likely that Manson will not be able to appear in the Siberian city.

"Marilyn Manson propagandizes anti-family values and a depraved lifestyle, which has a deep effect on the upbringing of the young generation and results in a feeling of not understanding modern culture in the older generation," the Christian activists wrote in their appeal to the city administration.

The activists accused Manson of violating several Russian laws, saying his music and concerts served to propagandize nontraditional sexual orientations among minors. Furthermore, Manson's actions at concerts like burning the bible, singing "blasphemous" songs, and dancing in a priest's costume were said to offend religious sentiments.

Marilyn Manson first announced plans to play a concert in Novosibirsk after an earlier concert planned in Kiev was canceled due to the unstable political situation in Ukraine. Manson also had planned to make a full tour of Siberian cities last year, yet canceled the tour without explanation.

Manson has not yet responded to reports of the possible concert ban. The singer has a growing following in Russia and recently opened an account on Russian social networking site Vkontakte, on which he has even experimented with writing in Russian, indicating that he hopes to grow his popularity in the former Soviet Union in the future.

Manson is far from the only Western rock band to have run into problems in Russia recently — Polish band Behemoth, a black metal group similar in appearance to Manson, ran into numerous difficulties on a recent tour in Russia: They were protested against in several cities, prevented from performing in Novosibirsk, and finally arrested in Yekaterinburg for allegedly violating the terms of their visas, which resulted in their deportation out of the country. 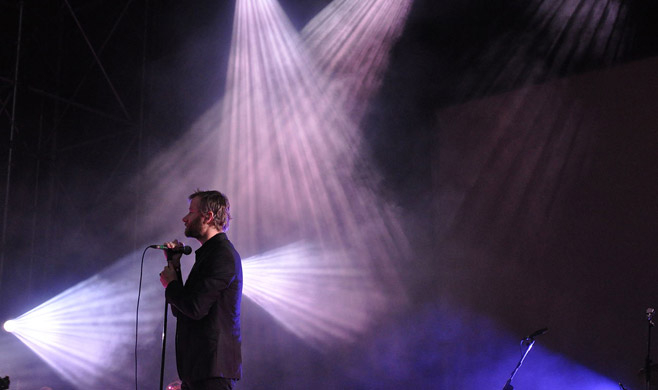 American band The National previously canceled concerts due to politics.

American band Bloodhound Gang found themselves similarly targeted after bass guitarist Jared Hasselhoff put a Russian flag down his pants during a concert in Odessa. The group was subsequently banned from performing at a festival in Russia's Krasnodar region, and Hasselhoff and fellow band member Jimmy Pop were investigated for "inciting hatred" — a charge that carries up to a five year prison sentence in Russia.

In response to Russia's law banning gay propaganda and the Russian stance on political unrest in Ukraine, some international acts have chosen to boycott concerts in Russia rather than navigate the increasingly sensitive environment for international performers in Russia: American indie-rock band The National announced the cancellation of a planned Russian and Ukrainian tour in April due to the political climate in the region, and Blondie refused an official invitation to perform at the Sochi Olympics due to human rights violations in Russia.

While few other Western groups have been as open about refusing to perform in Russia, local promoters say it has become increasingly difficult to attract prominent groups from abroad. The protests and hatred directed towards groups like Bloodhound Gang, Behemoth, and now Marilyn Manson may serve to give pause to other groups.