During the Russian Art Week and the U.K.-Russia Year of Culture 2014, many art galleries chose to focus on art styles stereotypically attributed to Russia such as propaganda art and constructivism. Conversely, the Erarta Galleries in London — part of St. Petersburg's Erarta Project — decided to present more contemporary art in its "Would-Be Worlds" exhibition.

The Erarta Project is made up of a large museum in St. Petersburg, an international modern gallery chain — New York, ZЯrich, London and Hong Kong — and a workshop for making reproductions from the Erarta's online art collection. Matthew Burgess, the associate manager for the Erarta Galleries London sees Erarta as "an ambassador for Russia in Britain. and abroad."

In the "Would-Be Worlds" exhibition, the artists presented include Veronica Smirnoff, Rinat Minnebayev, Anna Urazova and Yevgeny Zaremba. The theme of the exhibition is an exploration of imaginary, "ephemeral" and "fairytale" worlds that are timeless, personal and mystical. The works are made from different materials to allow for highlighting different themes: Urazova uses charcoal to create delicate botantical illustration-style drawings, Smirnov uses traditional oak canvas and egg tempera, Minnebayev makes his paper himself to create an unusual surface to draw on and Zaremba uses impasto paint to overlay different contrasting colors.

Matthew Burgess was inspired to create the exhibition when he met a Russian artist called Veronica Smirnoff who was educated at the Slade School of Art and the Royal Academy of Art in London. She was chosen to present her works at the 2010 John Moores Painting Prize in Britain. 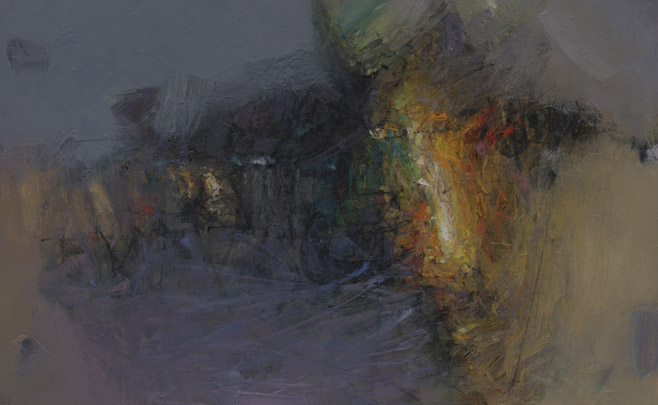 Smirnoff uses special oak panels that are brought in from a Russian monastery where they are made to Smirnoff's specifications and blessed. The artist also paints with egg tempera, which is the traditional medium for Orthodox icons. She uses traditional Russian religious painting methods to create modern works which focus on imaginary worlds based in her childhood memories.

Burgess has also previously met Evgeny Zaremba, another artist presented at the exhibition, in 2012 at Zaremba's exhibition at the Erarta Museum in St. Petersburg. Burgess describes Zaremba as having an "almost spiritual aura about him" and being "very connected to his beautiful artistic technique." Zaremba himself calls his pieces "visual poetry," using strong colors and abstract symbols that draw on deep emotions to create pieces about natural phenomena such as his "Lightning" or "Moon Night," which seem to depict washed out light cast by the moon or by a lightning.

This exhibition is timeless and yet highly modern at the same time. It also very cleverly avoids any political issues that might arise during the current difficult time period by using pieces that are about universal symbols such as childhood, imagination and nature.

According to Burgess, the aim of Erarta Galleries London is "to fit Erarta's artists into the context of British contemporary art." The Erarta Project as a whole has a wealth of international experience, which can be employed to select artists whose pieces will sell well and be welcome in a variety of countries with different political and cultural ideals.