Contribute Today
By Katerina Azarova
May 29, 2014

We've waited and waited for summer, and now it's finally here — well, according to the calendar, at least. The slight cold spell is nothing but a minor drawback, because forecasts say sunshine, blue skies and highs of at least 27 degrees Celsius are in our immediate future. It also means all those outdoor, open air events are going to be that much more enjoyable — and, of course, it also means that all the nonsmokers in our fair capital will get the chance to enjoy their favorite bands without the typical cloud of smoke hanging over them. In case you forgot, Moscow bars and restaurants are smoke-free from June 1, so let's get ready for a healthier weekend with great live shows.

Friday night is going to be all about indie, post-punk and industrial music, because Psychic TV are in town. They are a video art and music group that formed in London back in the 1980s, and primarily perform psychedelic, punk, electronic and experimental music. Genesis P-Orridge, one of the founders of Psychic TV, is possibly one of the most well-known musicians working with acid house and industrial music. He now plays most psychedelic rock — but like no one before him. Recently, the band have taken to covering tracks by Pink Floyd, Can, Hawkwind and Funkadelic, and this is the sound fans know and love them for. PTV3, as they now call themselves, will be sharing the stage with Jamie Stewart and Xiu Xiu from San Jose, California. The guys have recorded 13 albums since 2002 and their latest, released just a few months ago, was lauded by fans and critics alike. Both bands are taking over Pipl on Friday, May 30. The show kicks off at 8 p.m., so get your tickets now and don't be late!

Saturday is party night in the capital, with most clubs opening their doors to internationally acclaimed DJs. But if you want all the fun of a live electronic performance without necessarily going to a club, I've got just the thing for you, because Stadium Live is bringing NERO to town. 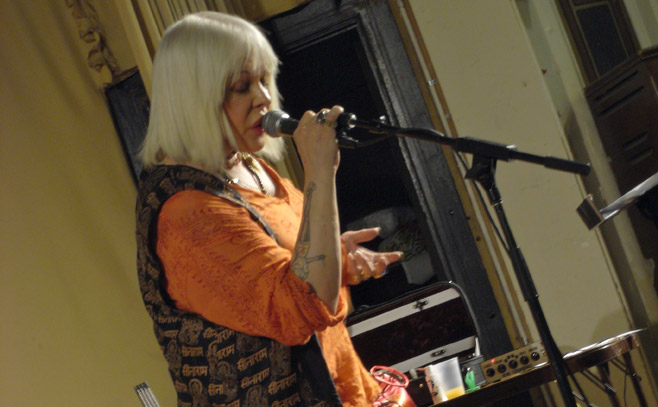 Musician Genesis P-Orridge and her band Psychic TV will play on Friday.

NERO are a British electronic music trio composed of Daniel Stephens, Joe Ray and vocalist Alana Watson. In August 2011, they released their debut studio album, called "Welcome Reality," which reached No. 1 in the British albums chart. In August 2012, "Promises" achieved gold status in the U.S. and in February 2013, Nero won a Grammy Award for their remix of "Promises" with Skrillex. They've headlined some of the biggest music festivals in the world, including Tomorrowland, Ultra Music Festival and Electric Daisy Carnival. And fans will be happy to know NERO are currently working on their new album. Its first single was released just weeks ago, so you know you can expect the guys to tease the crowd with a few new tracks. Get your tickets now while there are still some available: The show starts at midnight on Saturday at Stadium Live!

And Sunday's going to the heavy metal and rock fans, because Moscow is playing host to the legendary Black Sabbath. Formed in Birmingham back in the late 1960s, these guys are still rocking crowds all over the world. The band is considered by most to be the pioneers of heavy metal. They helped define the genre with releases such as Black Sabbath, Paranoid and Master of Reality in the 1970s. They were ranked by MTV as the "Greatest Metal Band" of all time, and placed second in VH1's "100 Greatest Artists of Hard Rock" list. Rolling Stone magazine ranked them No. 85 in their "100 Greatest Artists of All Time." Black Sabbath have sold over 70 million records worldwide, and were inducted into the British Music Hall of Fame in 2005 and the Rock and Roll Hall of Fame in 2006. They have also won two Grammy Awards for Best Metal Performance.

Ozzy Osbourne and the band are currently touring in support of their latest album, called "13," which they released last year. They're only in town for one night, so don't miss your chance to see these music legends live! Tickets start at 4,000 rubles and the show kicks off at 8 p.m. on Sunday at the Olimpiisky Sports Complex.

There's yet another exciting weekend planned for Moscow, so go on and have a fantastic time!