"The point of playing music is to give and never be afraid to take it too far," said Jamie Stewart, musician and songwriter from Xiu Xiu, who took time off from the band's European tour to speak with The Moscow Times ahead of their Russian concerts with Psychic TV in Moscow on May 30 and St. Petersburg on June 1.

Indeed, in the 12 years since Xiu Xiu's debut album "Knife Play" in 2002, Stewart has been pushing the sonic and emotional boundaries of his music. As a songwriter, Stewart's tortured, confessional approach to songwriting, which has always used his personal life as its subject matter is often raw and disturbing, with music that is both uncomfortable but hauntingly beautiful. Unconventional and abrasive, Xiu Xiu's music meanders between experimental post-punk and harsh industrial noise, with Stewart's fragile voice always present above the chaos.

The advice was given to him by his father, Mark, a successful producer and one-time member of popular folk group The Kingston Trio, who was crucial in Stewart's early musical education, though he admitted that he grew up in a very dysfunctional household.

"There were a few years in which he was crucial in a helping me set up a studio and encouraging me. He then lost his mind and killed himself, but the idea he left me with will always be there.

He only saw us play one time before he died and it was an awful show, but he made a point of telling me to go on."

Over the band's 11 full-length albums, the themes and topics Stewart has engaged with has remained constant. "It is in the world of darkness for certain while family, politics and lovelessness in their many facets continue to be explored," Stewart begins, when asked about his obsessions. "Ideas around violence, crime, sexuality, gender, environmental apocalypse, cats, cartoons, war, death, drugs, ghosts and suicide have become repeating topics as well."

A "best-of" record was released for Record Store Day in April. "It has consumed and controlled my life and I have feel very little if any separation from it," Stewart said, looking back at the band's evolution.

The past 12 months have been a busy period for him, with releases that include "Nina," a Nina Simone covers record, "Unclouded Sky," an album of renditions of American and Caribbean spiritual and folk songs composed between 1850 and 1920, the aforementioned greatest hits compilation, a collaborative effort with Oxbow lyricist Eugene S. Robinson and the Xiu Xiu's new full-length record, "Angel Guts: Red Classroom." 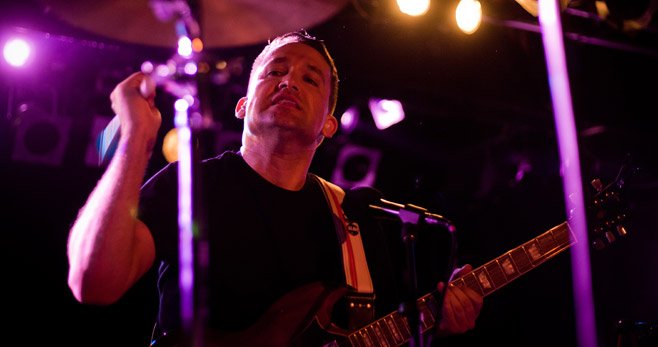 Jamie Stewart is both singer and songwriter for post-punk group Xiu Xiu.

"The process was to sit in my little studio which is next to one of the bleakest parts of Los Angeles, the sounds of crazed street people wafting in constantly, and to make the ugliest sounds I could using analog synths. Then to try and write and harmonically very simple song around the sounds," Stewart said, about recording the album.

He began writing the music for "Angel Guts" after having just moved to California following four years in Durham, North Carolina, accompanying bandmate Angela Seo who was completing her post-graduate studies at Duke University. He hated it there, though out of his boredom he entered a period in which he was musically very productive.

Seo contributed to the songwriting while Thor Harris of experimental rock band Swans, who will play in Moscow in November, filled in on drums. The two bands will tour the U.S. together this fall. "We don't really sound like them, but their intensity, furious thrusts, seriousness and darkness shaped tremendously what Xiu Xiu is," Stewart said about Swans' influence on the band.

Perhaps it is fitting that Xiu Xiu's shows in Russia will see the band share the stage with musicians that have influenced Stewart greatly — experimental video art and music group Psychic TV, founded by transgender performance artist Genesis P-Orridge and the late Peter Christopherson, both founding members of British industrial music pioneers Throbbing Gristle, in 1981.

Stewart said he is looking forward to the Russian concerts, but avoided commenting on the political situation: "The people who would come to a Psychic TV/Xiu Xiu concert would have nothing to do with imperialism or bigotry. I feel as queer artists, it is our duty to go and play with our full hearts … It would be a delight to do something together [with Psychic TV], but we will see."