As fighting between pro-Russian separatists and Ukrainian troops intensified in eastern Ukraine on Thursday with 11 killed near Donetsk, ordinary citizens were gearing up for Sunday's presidential election.

The race has had a polarizing effect on many residents of Ukraine, with widespread disagreement on whether it will stabilize the situation or fan the flames of discontent in the turbulent east.

Of the 21 contenders for the throne, the clear leader in the race is oligarch Petro Poroshenko, who was favored by 33 percent of respondents in a May 11 poll by the Kiev International Institute of Sociology. The other three most notable candidates are former Prime Minister Yulia Tymoshenko (5.9 percent), parliamentary deputy Sergei Tigipko (4.1 percent) and Mikhail Dobkin, former governor of the Kharkiv region, who came in sixth place in the poll with 2.6 percent.

Analysts agreed that the real fight would be between Poroshenko and Tymoshenko, and at least one analyst interviewed by The Moscow Times cautioned against buying into the predictions of recent polls.

"Ukraine has already surprised us more than once," said Viktor Moronenko, head of the Ukrainian Studies Center at the Russian Academy of Sciences' European Institute, predicting that the results of the election would likely differ greatly from the prognoses of recent surveys.

Alexander Shatilov, dean of the sociology and political analysis department at the Russian government's Financial University, said he was pessimistic about the elections, saying the east of Ukraine would remain a "problem zone" for years to come regardless of the vote's outcome.

Both agreed that the race would probably not be won in the first round.

"If it is an honest election," Mironenko said, "it definitely will not be decided in the first round." 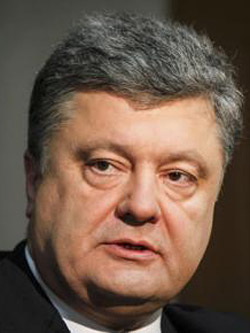 Poroshenko, 48, a parliament member who is standing as an independent candidate, is also known as the "chocolate king" for his Roshen chocolate company, Ukraine's largest candy company.

An oligarch who ranks among the wealthiest men in Ukraine, Forbes put his estimated net worth at $1.3 billion earlier this year.

Despite being known more for his wealth, he is also an experienced politician, having served previously as foreign minister and economy minister.

But unlike ousted President Viktor Yanukovych, Poroshenko has come out firmly against overly friendly ties with Russia. He openly supported the protests in central Kiev against the former Kremlin-backed leader, and has played up his pro-European stance throughout his election campaign.

He spoke out in favor of breaking with tradition and marking May 9 not as Victory Day but as a Day of Remembrance and Reconciliation, in line with the United Nations holiday of the same name on May 8 and 9.

He has also openly backed Ukraine's move to file a lawsuit against Russia for its annexation of Crimea with the UN International Court of Justice.

On Ukrainian talk show Shuster Live, Poroshenko said: "The question is not only the recognition of Russia as an aggressor. The goal is to impose multi-billion dollar fines on Russia," adding that Russia would have to answer for the annexation of Crimea if it wants to "remain a part of the international community."

At the same time, however, he has apparently tried to appease pro-Russian voters, emphasizing that if he became president, he would offer residents of eastern Ukraine the chance to hold referendums "on all issues."

"We're not afraid of any referendums, we'll organize them and conduct them in line with the law," he said in comments carried by RIA Novosti.

And perhaps playing up his biggest advantage in the race — his wealth — Poroshenko has offered to not only focus on helping entrepreneurs boost their competitive edge, but also to provide them with access to European markets.

But while his wealth may appeal to some voters, Shatilov said a win by Poroshenko would only complicate matters for Ukraine, especially the east.

Many pro-Russian residents in eastern Ukraine would have a hard time trusting an oligarch, since "it is difficult for oligarchs to be objective political actors considering they have their own interests," Shatilov said. 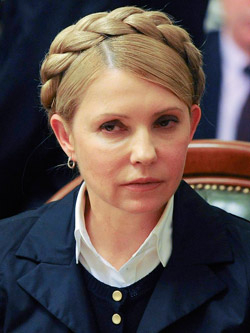 In a sign of the fondness some Ukrainians feel for Tymoshenko, an angelic-looking image of her has been plastered on pro-EU posters all over Kiev's Independence Square — but her likeness has also been defaced and pasted on a blow-up sex doll at a checkpoint in Ukraine's east run by pro-Russian separatists.

Perhaps the most polarizing candidate in the race, she has been both praised by pro-EU demonstrators and demonized by the pro-Russian side ever since she gave an emotional speech on Independence Square in the immediate aftermath of Yanukovych's ouster.

A leader of the Orange Revolution protests of 2004 and 2005, she was dubbed the "gas princess" by critics in 2004 because of the wealth she gained in the energy sector.

After two terms as prime minister, she narrowly lost to Yanukovych in a 2010 presidential run-off.

Now, since her return to the political spotlight, Tymoshenko has it worse than the other candidates because "as a personification of the current authorities in Kiev, she's getting criticism from all sides," said Mironenko.

That criticism has come from the West in addition to Ukraine, he said.

While he declined to give a specific prediction on who would win, Mironenko said Tymoshenko, who is running for the Fatherland party, had a strong chance.

"Tymoshenko has quite a lot of supporters, and for some people, they may be experiencing pangs of conscience after she was imprisoned," he said, referring to the two years she spent behind bars on abuse-of-office charges she and her supporters say were politically motivated.

Since her comeback, Tymoshenko has declared war on oligarchs and corruption, describing oligarchs as "a social tumor" that must be eliminated, RIA Novosti reported. She has made clear her intention to integrate further with the European Union.

"I will do whatever I can as president to ensure that Ukraine decides its own future in Europe as a full-fledged member of the democratic world," she said at a business forum in Kiev earlier this week, Reuters reported. 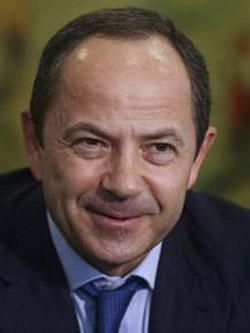 Sergei Tigipko, 54, has trailed behind Tymoshenko in recent polls and taken a stance on EU integration that is in direct opposition to that of both Poroshenko and Tymoshenko.

A banker and parliamentary deputy from the Party of Regions who formerly served as economy minister, Tigipko also worked as Yanukovych's campaign director in 2004.

He has been highly critical of Kiev's current authorities for not doing enough to stabilize the situation in eastern Ukraine, saying in comments on his official website that the government "hasn't taken even a single step" to resolve the situation and calling on authorities to "listen to the people."

He has called for a decentralization of power and giving the regions more autonomy, as well as making Russian the country's second official language.

On Thursday, as news broke of fresh violence in eastern Ukraine, he issued a statement calling on all sides to "stop escalating the violence."

He also stressed the importance of Ukrainians deciding for themselves how they hope to resolve the ongoing crisis.

"All these talks [on resolving the crisis] that will take place outside the country ... they will only partly help. … If we count only on the international factor, we'll pay a great price," he said.

Sergei Mikheyev, director of the Center for Political Technologies think tank, described Tigipko as "the most mentally competent" of all the candidates, in comments carried by RIA Novosti.

"But he doesn't stand a chance of winning," Mikheyev said. 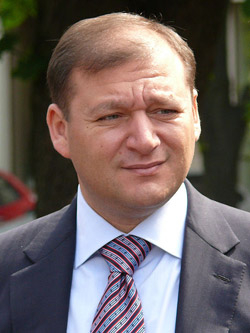 The former governor of the Kharkiv region, Mikhail Dobkin, 44,  is the official candidate of the Party of Regions, though he has been behind fellow party member Tigipko in recent polls even despite financial backing by Ukraine's richest man, Rinat Akhmetov.

A pro-Russian candidate, Dobkin vowed in March to offer "a large-scale renewal of economic and diplomatic relations with Russia" if elected president,  Interfax-Ukraine reported.

He came out vehemently against the pro-EU protests that erupted in Kiev last November and has expressed doubt about the legitimacy of the new government.

The new government seems to feel the same way about him, as Interior Minister Arsen Avakov opened a criminal case against him in April on charges of "infringing on the territorial integrity of Ukraine."

As for his political clout, some analysts have floated the idea that he was backed in the race solely to make other candidates look good, noting that he is known more for viral videos of him gratuitously cursing than any political actions.

"There is no other way to describe him but as a clown," political commentator Yulia Latynina said on Ekho Moskvy radio station.

Dobkin is also on a blacklist of dozens of officials whose assets have been frozen by Switzerland over the ongoing crisis.