"Do you want to know how to write a song? Songwriting is about counterpoint. Counterpoint is the key. Putting two disparate images beside each other and seeing which way the sparks fly." So says musician Nick Cave in the film "20,000 Days on Earth," which opens the Beat Film Festival on May 27.

An independent initiative which began in 2010, the festival, which has its focus on arts and music documentaries, has grown to be one of the largest film and music events in Russia, and will screen about 25 features and short films — both independent titles and international hits — this year at a number of venues, including the Documentary Film Center and the Summer Cinema at Muzeon Park.

"I think we also managed to contribute to the reputation of the whole genre of documentary here. We are indeed specializing in documentaries that are entertaining and arty and that was the notion that was not well known here at all. So it is a new format of intellectual entertainment that the festival invented and I guess that is the key reason for its success," explained Alyona Bocharova, managing director of Beat Films.

The festival's opening film is a semi-fictional movie about Cave, the Australian front man of seminal band Nick Cave and the Bad Seeds, who has grown to become a cultural icon. It is a refreshing approach to the "rockumentary," and follows him as he goes about the 20,000th day of his life.

In the film by directors Iain Forsyth and Jane Pollard, which has garnered rave reviews since it premiered at this year's Sundance Film Festival, Cave speaks at length about the songwriting and the creative process of artists with his various collaborators over his career which began with The Birthday Party in 1973.

Among those he engages in conversation with include band mate and violinist Warren Ellis, Blixa Bargeld, singer of German industrialists Einstürzende Neubauten who played guitar for Cave's backing band until 2003, and Kylie Minogue, with whom he is remembered for the duet "Where the Wild Roses Grow."

Perhaps fittingly, on the 20th anniversary of Britpop — part of the cultural phenomenon known as "Cool Britannia" and a sub-genre of British alternative music that developed as a response to the U.S.' grunge music in the early 1990s — and during a time when the movement's legacy is being reconsidered, a number of films at the festival focus on the movement's most popular groups, including Blur ("No Distance Left to Run"), Pulp ("A Film About Life, Death and Supermarkets") and Radiohead ("Meeting People is Easy").

The movement took from British guitar music of the past, including The Kinds and The Beatles, and Beat is screening a film on the latter, though "Good Ol' Freda" has its spotlight on Freda Kelly, the band's loyal friend and secretary of 11 years. 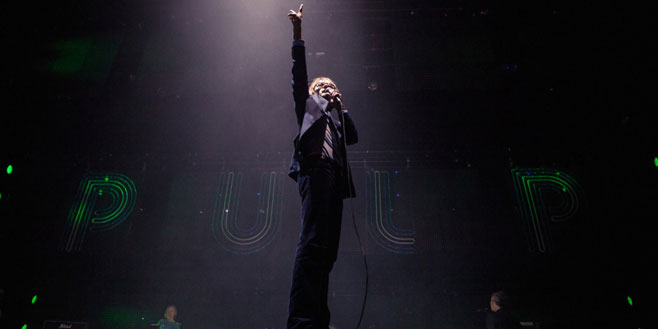 "Pulp: A Film About Life, Death and Supermarkets" explores Britpop by looking at one of its best-known acts.

Another influence on Britpop was the "Madchester" scene of the 1980s, and Beat also covers this with its "80's Manchester Night" program, a "visual anthology of the Manchester music scene starting from the 1980s until 2000s," happening on May 31 at Strelka Institute, that includes a photo exhibit by Kevin Cummins and a DJ set by Mike Pickering, one of the first residents of The Hacienda nightclub, the movement's ground-zero, and the man who signed bands Happy Mondays and James to Factory Records.

"In this show photographs gain new life, and this is what really fascinates us — how culture is documented — as it is really a kind of problem here [in Moscow], the local culture is undocumented and this show is a just an example of how many ways one can celebrate cultural history," said Bocharova, on her excitement about the Manchester Night program.

A series of talks on the future of documentary film making, all of which are free, and whose speakers include many directors whose films are screening at the festival, compliment the film program. "Best of Beat," a selection of films about musical heroes of Russia was also chosen by Beat's audience on social media, one film from each of the previous editions of the festival.

Among the highlights of this year offerings are recent documentaries on techno and rave in the '90s ("Oldschool Renegades"), U.S. indie band The National ("Mistaken for Strangers"), punk icon Kathleen Hanna of the "riot grrrl" movement ("The Punk Singer') and "Encore," a film about Auktyon — the St. Petersburg rock band, who recently celebrated their 30th anniversary, will also be present at the festival for a Q&A session alongside the film's director Dmitry Larinenko.

Bocharova adds with Beat having grown so rapidly in the past five years, they are looking at distributing the films on a wider scale. This includes the regional project "Beat Weekend," which takes five films from the program to about 10 cities across the country, and "Beat Films," an agency founded in March that is aimed at bringing documentaries outside of film festivals to be screened in other settings, for example, films with an urban focus at the Moscow Urban Forum.

Beat Film Festival takes place from May 27 to June 8. Films will be screened in English with Russian subtitles. The program can be found at beatfilmfestival.ru.