While the West threatens Russia with isolation over its actions in Ukraine, Crimea is already dealing with the reality of severed links to the outside world.

Russia's annexation of Crimea in March cut the peninsula off from almost every supply artery it had. Water, gas, electricity and food that used to arrive in Crimea from the Ukrainian mainland now stops short at a hostile border. And so do tourists, the lifeblood of one of Crimea's key industries.

Last week, representatives of about 160 Crimean hotels, tour operators, children's camps and associations tried to drum up Russian clients at a state-sponsored tourism exhibition that ran Wednesday to Friday in Moscow. Before the Russian annexation, up to 70 percent of vacationers in Crimea were Ukrainians, hoteliers at the show told The Moscow Times. According to Russia's tourism watchdog, Rostourism, nearly 6 million tourists visited Crimea last year — meaning that if the flow of Ukrainian tourists dries up, the peninsula faces the task of replacing some 4 million lost visitors.

Salespeople paraded images of expansive beaches and soaring cliffs and extolled the palliative virtues of the region's unique blend of sea and mountain air to a steady stream of Russian tourists and businesspeople, but behind the banter the stakes were high.

Hotels that would normally host a full house in May are now barely breaking 10 percent occupancy, said Elvis Yakubovych, director of a work-and-travel program who represented a local tour agency at the event.

In previous years, about 25 percent of vacationers to Crimea were Russians. Mikhail Buchenkov, director of Porto Mare, a family-oriented four-star resort complex on the Black Sea coast, plans to have 70 percent of his clientele come from Russia this year.

This is a tall order indeed, but Moscow has stepped in to help — on May 7, the government committed 7 billion rubles ($196 million) to upgrade Crimean transport infrastructure in time for the summer and promised subsidies for air and ferry routes to the peninsula. Earlier, flights to Crimean cities were freed from Russia's 18 percent value-added tax. Huge infrastructure projects are also underway to connect Crimea to the Russian mainland, although they will not be completed for several years.

But if it is to more than double the influx of Russian tourists, Crimea will also need to transform its image as a back-in-the-U.S.S.R. vacation zone, Buchenkov said. “People used to say that there was no service in Crimea. There was this belief. But everyone will come and see: there is service, there are good hotels, and recreation that you cannot find anywhere else.” 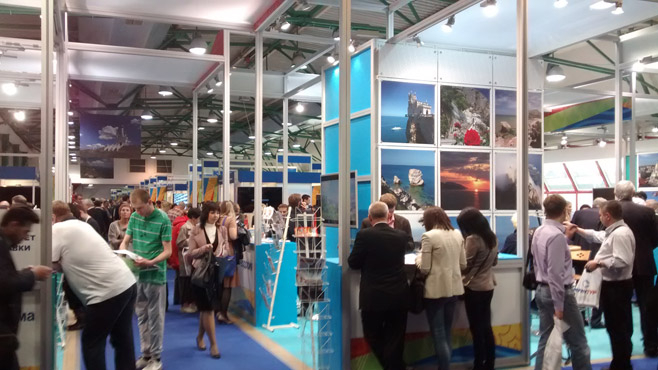 Confidence in the quality of Crimea's offerings was running high — multiple participants said that the imperative now is not to change their services, but “to let people know” how developed they actually are.

This stalwart optimism was pervasive among the assembled Crimeans, many of whom voted to join Russia in the referendum on March 16 knowing perfectly well the risks to their livelihoods. Half of Crimea's 2 million population depends directly or indirectly on the tourism industry, according to Alexei Kuklyev of the Crimean Resorts and Tourism Ministry. But despite the disruption caused by Russia's redrawing of national borders, exhibitors were stubborn in finding silver linings to the clouds.

“Now the money that we earn will stay in the Republic of Crimea, rather than going off to Kiev, so we will have greater opportunities to invest in our business and infrastructure,” said Svetlana Meshkova, representing the mammoth state-owned health resort Miskhor.

Founded in 1920 and equipped to house more than 1,000 people, Miskhor is one of several such venerable resorts on the southern coast near Yalta that specialize in a medley of medical treatment and recreation popular among Russian and Ukrainian vacationers. While the resort's medical services are top-notch, its infrastructure has become dated for want of investment, Meshkova said — rooms lack air-conditioning, and the buildings demand renovation.

Although Miskhor previously survived on contracts with Ukrainian firms, Meshkova was confident that Russian companies, state-owned and otherwise, would now flood in to fill the gap, and had four contracts already signed at the exhibition to prove it.

But for small, privately owned businesses, the outlook is significantly less rosy. Olga Kozlovskaya, who travelled to Moscow as representative of three mini-hotels on the peninsula.

“We hope that Russians will support us,” she said, adding, “now will be a difficult period, but we will survive.”

Others harkened back to another crisis of Crimean sovereignty to put the situation in perspective. Miskhor's Meshkova remembered 1991, “when one day we woke up in another country, in Ukraine. Then it was also very difficult, much more difficult than it is now. I think that in two years everything will sort itself out," she said.

The United States and its allies warned Moscow of grave consequences if "any" of the Russian troops massed on the border were to cross into Ukraine.
sting operation

The men were caught trying to smuggle nearly 400 kilograms of cocaine from the Russian embassy in Argentina.
ramping tensions

The latest developments you need to know.
'common security'

Iranian President Ebrahim Raisi said Tehran has "no limits for expanding ties with Russia" on his visit to Moscow this week.