We can excuse Kremlin spin doctors for branding all Maidan protesters as "Banderites" and fascists, despite the fact that the protesters came from a broad cross-section of society, including many from eastern and southern Ukraine.

Indeed, Ukrainian war hero Stepan Bandera is a powerfully negative symbol for most Russians. After all, Soviet-era textbooks clearly stated in black and white that Bandera was a fascist and a mortal enemy of the Soviet Union. Notably, those textbooks failed to mention that the Nazis sent Bandera to the Sachsenhausen concentration camp, but that's a minor detail.

To be sure, Bandera was a complex figure, and that makes him an ideal tool in the hands of Kremlin propagandists. They can cast in any light depending on the needs of the moment.

What is difficult to understand, though, is how the U.S. came to be included on Russia's list of fascist countries.

At the same time, however, the Kremlin's propaganda machine has chosen the "fight against fascism" as the ideological justification for the invasion of Ukraine. Because the U.S. has ended up on the other side of the barricade — that is, lending support to the Kiev interim government — there was no choice but to paint Washington with the same brush. 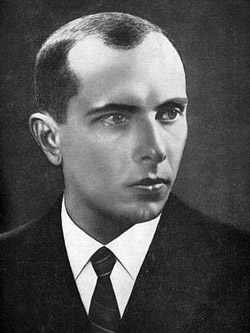 This is truly something new. Even even during the worst years of the Cold War, the Soviet Union never called the U.S. "fascist."

Kremlin-friendly Expert magazine ran an article this week addressed to U.S. President Barack Obama. It begins with the accusation that Obama had "forgotten the great Russian victory of May 1945" and closes with a highly inflammatory conclusion: "We beat Hitler and we'll beat you [Obama]."

In addition, ultraconservative Zavtra newspaper editor-in-chief Alexander Prokhanov has been running a series of editorial columns with a leitmotif of the sacred struggle between the Russian people and the U.S. Reading these comments, a person might conclude that the U.S. was not one of the Allied Powers but was on the side of Nazi Germany.

"The black semen of fascism is spilling over Kiev, the mother city of Russia," writes Prokhanov in his typical bombastic style. "Fascism, like poisonous and rotten bread dough, is rising, overtaking Kiev and spreading throughout the whole of Ukraine. … It is a fascist prayer of hell, a memorial to [Heinrich] Himmler and a tribute to Hitler," he writes.

And then, referring to the 46 pro-Russian protesters who were burned alive in a Trade Union building in Odessa on May 2, he writes: "Obama and [German Chancellor Angela] Merkel smell of charred human flesh … A new battle against fascism is inevitable."

Meanwhile, the State Duma passed an unprecedentedly harsh law a few days ago that makes it a crime to "question the results of World War II." Anyone who writes something in an article or blog that might be interpreted as calling into question the official historical interpretation of World War II might have to not only pay a hefty fine, but even spend a few years in prison.

If that is the case, what should be done about the numerous propaganda publications that liken the U.S. with Nazi Germany and Obama with Adolf Hitler?

If that isn't distorting the history of World War II, I don't know what is.

Andrei Malgin is a journalist, literary critic and blogger.