Contribute Today
By Ivan Nechepurenko
May 12, 2014

When President Vladimir Putin reminded the public in April that he could use military force to protect Russia's interests in eastern Ukraine, western policymakers and pundits sounded the alarm about an imminent Russian invasion.

But as Putin called on protesters in Donetsk and Luhansk to postpone their separatist referendums last Wednesday and later stopped short of endorsing the vote's results, these same pundits were left scratching their heads.

The statement issued by the Kremlin's press service on Monday did little to clarify Moscow's stance on the referendum, saying only that authorities in Moscow expected a "practical realization of the referendums' results to proceed in a civilized fashion without any violence and via dialogue between representatives of Kiev, Donetsk and Luhansk."

"We welcome the efforts of all intermediaries, including the Organization for Security and Cooperation in Europe," the statement said.

Putin's spokesman Dmitry Peskov told The Moscow Times that Putin was not expected to make any additional comments about the situation and that the Kremlin's statement was "exhaustive."

If one conclusion could be drawn from the Kremlin's seemingly vague statement, it is that Moscow does not have an immediate desire to absorb southeastern Ukraine, despite the outcome of Sunday's vote being overwhelmingly in favor of independence from Kiev.

But it is precisely this kind of strategy to be expected of Putin, analysts say.

Following more than a decade at the helm of Russian politics, Putin has become a shrewd master of waiting and catching his adversaries off-guard — a trait which is quite in line with his reputation as a judo master. Journalists often speak about the "three-day rule" in reference to the fact that Putin seems to always make crucial decisions three days after big events take place.

After getting permission to use military force in Ukraine on March 1, Putin waited for three days to make public comments about the crisis. In the meantime, he held telephone conversations with his counterparts in Berlin, Paris and Washington — all while the public wondered what his next moves might be.

Moscow-based analysts interviewed by The Moscow Times on Monday agreed that Putin's actions are often misinterpreted by the media and authorities in the West, a fact which has prolonged the Ukraine crisis.

"Unlike what is widely accepted in the international press, Putin does not aim to invade and divide Ukraine," said Dmitry Trenin, director of Moscow's Carnegie Center.

"The Kremlin wants to create a force in the country's east that will first and foremost represent the Russian identity and which will become part of the Ukrainian elite, where it would balance its Western-oriented representatives," Trenin said in a phone interview. 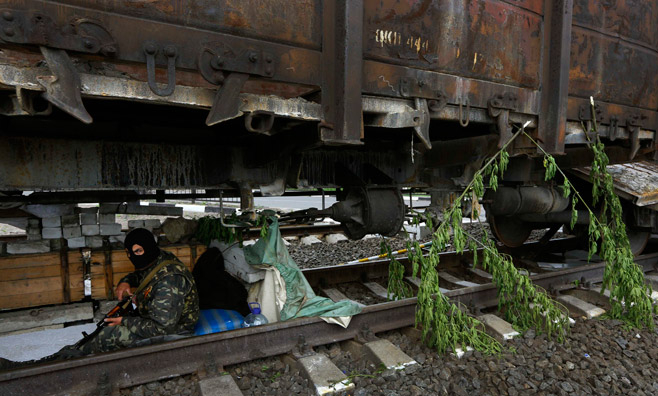 A pro-Russia separatist manning a position underneath a train wagon in the eastern Ukrainian city of Slovyansk.

The change in Russia's tone has been noticed by some international diplomats directly engaged in the crisis-resolution process. The chairman of the Organization for Security and Cooperation in Europe, Didier Burkhalter, stressed that Russia's reaction to the recent referendums did not indicate a recognition of the results, but only spoke about "respecting" the referendums' outcome.

"We have seen in Moscow that there is an openness for a dialogue," Burkhalter told journalists in Brussels on Monday, Reuters reported.

In fact, analysts said, the referendums have been used to secure Russia's leverage in Ukraine's future political landscape.

"These referendums are a tool used both in Moscow and eastern Ukraine to demonstrate that there are people there who are legitimately driving the agenda and are being supported by a big chunk of the population," said Fyodor Lukyanov, head of Russia's Council on Foreign and Defense Policy, a think thank with close ties to the Foreign Ministry.

"In Russia, this process is perceived as a way to establish a legitimate political structure in Ukraine's east, which new authorities in Kiev will not be able to ignore," he said.

Ukraine's interim government slammed the referendums as a sham on Monday.

"The farce, which separatists call a referendum, is nothing other than a propaganda cover for grave crimes — murders, tortures and abductions," Ukraine's acting President Oleksandr Turchynov said in a statement on his website.

Putin cautiously endorsed the upcoming presidential elections in Ukraine on May 25, but can swiftly change course if Ukrainian authorities refuse to take into account the interests of the country's east.

"Recent violence in Odessa and Mariupol has undermined the idea of a unified Ukraine; in many ways the success of the referendums was provoked by Kiev. From now on, they will have to find a way to work with these people or the country may fall apart," said Lukyanov.

If such a scenario played out, it would become harder and harder for the West to defend its tough stance on Russia, a policy which it has subscribed to since the Ukraine crisis began in November 2013 in central Kiev.

"Russia has demonstrated that it can make important decisions in defiance of the U.S. and its allies, so even if they reach a compromise it will incur very painful reputational losses for the West," Trenin said.

The co-chair of the Donetsk People's Republic, Denis Pushilin, issued a statement on Monday night declaring the republic independent and calling on the Russian Federation to accept it as one of its regions.

"Our people were hoping that Russia, Ukraine and Belarus would restore their historic unity, but this hope collapsed in March 2014, when during a coup d'etat the Kiev junta captured power in Ukraine," Pushilin said during a news conference.