Separatist rebels pressed ahead with a referendum on self-rule in east Ukraine on Sunday and fighting flared anew in a conflict that looked set to dismember the country and pitch Russia and the West into a new Cold War.

A separatist leader said the region would form its own state bodies and military after the referendum, formalizing a split that began with the takeover by armed pro-Russian men of government buildings in a dozen eastern towns last month.

A near festive atmosphere at makeshift polling stations in some areas belied the grave implications of the event. In others, armed altercations broke out between security forces and separatists, over ballot papers and control of a television tower.

In the southeastern port of Mariupol, scene of fierce fighting last week, there were only eight polling centers for a population of half a million. Queues grew to hundreds of meters in bright sunshine, with spirits high as one center overflowed and ballot boxes were brought onto the street.

On the eastern outskirts, a little over an hour after polls opened, soldiers from Kiev seized what they said were falsified ballot papers, marked with Yes votes, and detained two men.

They refused to hand the men over to policemen who came to take them away, saying they did not trust them. Instead they waited for state security officers to interview and arrest them.

Around 200 km (160 miles) north, clashes broke out around a television tower on the edge of the rebel stronghold of Slovyansk shortly before people began making their way through barricades of felled trees, tires and machinery to vote.

"I wanted to come as early as I could," said Zhenya Denyesh, a 20-year-old student, second to vote at a concrete three-story university building. "We all want to live in our own country."

Asked what he thought would follow the vote, organized in a matter of weeks by rebels, he replied: "It will still be war."

Western leaders threatened more sanctions against Russia in the key areas of energy, financial services and engineering if it continued what they regard as efforts to destabilize Ukraine. Some modest measures may come as soon as Monday, limited by the Europe Union's reluctance to upset trade ties with Russia.

Moscow denies any role in the fighting or any ambitions to absorb the mainly Russian-speaking east, an industrial hub, into the Russian Federation following its annexation of the Black Sea peninsula of Crimea after a referendum in March.

Ukraine's Interior Ministry called the referendum a criminal farce, its ballot papers "soaked in blood". One official said that two thirds of the territory had declined to participate.

Ballot papers in the referendum in the regions of Luhansk and Donetsk, which has declared itself a "People's Republic", were printed without security provision, voter registration was patchy and there was confusion over what the vote was for.

Engineer Sergei, 33, voting in the industrial center of Mariupol, said he would answer "Yes" to the question printed in Russian and Ukrainian on the ballot: "Do you support the act of state self-rule of the Donetsk People's Republic?"

"We're all for the independence of the Donetsk republic," he said. "It means leaving behind that fascist, pro-American government (in Kiev), which brought no one any good." 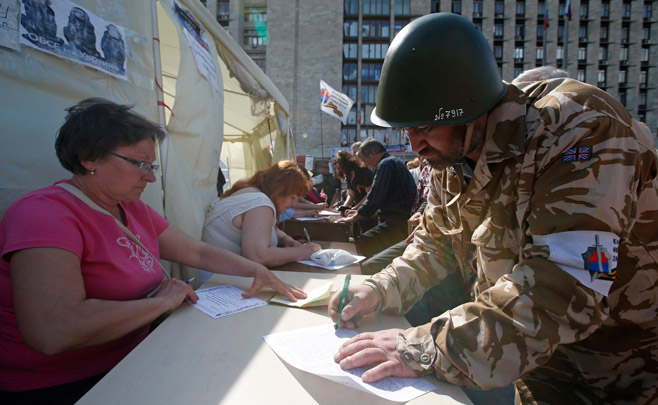 A man signs a document to receive a ballot at the referendum in Donetsk.

But in the same queue of voters, 54-year-old Irina, saw a "Yes" vote as endorsement of autonomy within Ukraine.

"I want Donetsk to have its own powers, some kind of autonomy, separate from Kiev. I'm not against a united Ukraine, but not under those people we did not choose, who seized power and are going to ruin the country," she said.

Others see the vote as a nod to absorption by Russia.

Annexation is favored by the more prominent rebels, but the ambiguity may reflect their fears an explicit call for full "independence" might not have garnered the support they seek and could leave them in an exposed position towards Kiev.

The present government came to power when President Viktor Yanokovych was toppled in February by mass protests in Kiev.

Pro-Western activists were angered by his decision to discard a cooperation accord with the European Union in favor of closer ties with Moscow. They also accused him of massive corruption penetrating all areas of the Ukrainian state.

Voting is due to end in the hastily arranged referendum in 53 locations at 10 p.m. (1900 GMT) and the rebels hope to have the ballots counted by Monday afternoon, although its outcome will not be widely recognized internationally or by Kiev.

One way or another it is likely to show a large "yes" vote, and one separatist said they would move fast with the next step.

"All military troops on our territory after the official announcement of referendum results will be considered illegal and declared occupiers," Denis Pushilin, a leader of the self-styled Donetsk republic said, according to Interfax news agency.

"It is necessary to form state bodies and military authorities as soon as possible," Interfax said he added.

Moscow has massed troops on the border and Kiev fears they may be called in as peacekeepers. Serhiy Pashinsky, head of the Ukrainian presidential administration, said a column of armored vehicles on the Russian side of the border bore the colors of U.N. peacekeeping forces. He offered no evidence or detail.

Ukrainian leader Oleksander Turchinov has urged eastern political leaders to join a "Round Table" discussion on devolution of powers in Ukraine. But he says he would not negotiate with "terrorists", a formulation meant to exclude most of the more prominent rebel leaders.

Pashinsky said Ukrainian forces had "destroyed" a separatist base and checkpoints in a broad operation around Slovyansk and nearby Kramatorsk in retaliation for attacks on their posts.

"This is not a referendum. This is a desultory attempt by killers and terrorists to cover their activity," he told a news conference.

Sunday's vote went ahead despite a call by Russian President Vladimir Putin on Wednesday to postpone it, a move that had raised hopes for an easing of tension.

The rebels in the east and the Kremlin say the pro-European Kiev government that replaced Yanukovych lacks legitimacy.

Kiev aims to banish such questions by holding a presidential election on May 25 and the West says they will impose sweeping sanctions on Russia if it tries to disrupt it.

Turchinov, who has ruled the referendum illegal and dismissed the allegations that the Kiev authorities are neo-fascists, said on Saturday any move to secession would be "a step into the abyss" and economic ruin.

The Metinvest company partially owned by Rinat Akhmetov, one of Ukraine's wealthiest businessmen with interests in the coal and steel industry in the east, said it was deploying a volunteer militia in Mariupol with workers from steel plants.

Akhmetov has presented himself as neutral in the conflict and Metinvest urged Kiev to refrain from sending troops on forays into the city if his militia maintained order with police.

The first criminal case for evading mobilization opened in the southern Russian city of Penza on Wednesday, human rights lawyer Pavel Chikov wrote on his...