The Austrian singer is best-known for performing as a bearded drag queen, an act that has startled many in Russia and prompted Vitaly Milonov, a deputy in St. Petersburg's legislative assembly, to send a letter to Russia's Eurovision organizing committee asking that no further Russian performers be sent to Eurovision, as in his opinion the competition propagandizes homosexuality.

"The participation of the clear transvestite and hermaphrodite Conchita Wurst on the same stage as Russian performers on live television is obvious propaganda for homosexuality and moral decay," Milonov wrote. In July 2013, Russia passed a law forbidding the spread of "propaganda" of "nontraditional sexual relationships" among minors, a measure that has been widely criticized in the West.

Deputy Prime Minister Dmitry Rogozin also criticized the choice of Neuwirth as the Eurovision winner, writing on Twitter that "Eurovision showed the eurointegrators their europerspective — a bearded girl."

Neuwirth told Reuters that his beard was "a statement to say that you can achieve anything, no matter who you are or how you look," adding that his whole Conchita Wurst persona is a statement on tolerance. 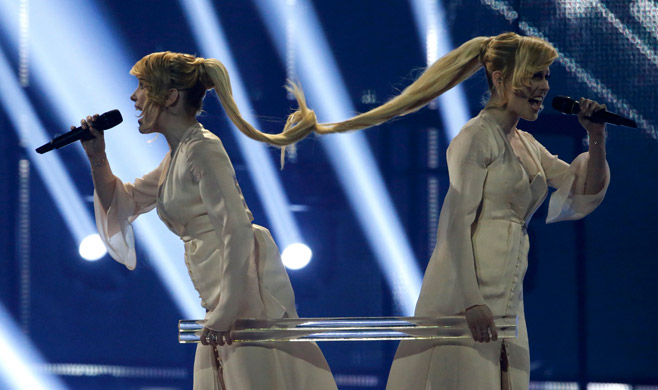 The Russian Tolmachevy sisters perform the song "Shine" at Eurovision.

"They do not judge the victors, it was the song that won, and in my opinion it was a beautiful song," Kirkorov said, adding that "with a beard, without a beard, a woman, a man — it is unimportant, this is a competition, a song contest. This time, Europe voted this way."

Neuwirth was not the only source of controversy at the contest — ongoing controversy over Russia's alleged involvement in the separatists movements in eastern and southern Ukraine caused many commentators to speculate that politics would hurt the chances of Russia's Tolmachevy sisters.

Russia's recent annexation of Crimea caused further confusion, as Eurovision organizers chose to count votes from the region as votes from Ukraine, stating that the policy was because Crimean phone operators continue to use Ukrainian telephone codes.