Contribute Today
By The Moscow Times
May 9, 2014

Thousands of goose-stepping troops, motorized artillery and ballistic missile launchers paraded past Putin under the Kremlin's red walls in a show of military might, while jets, helicopters and bombers flew in cloudless skies over Moscow.

State television called it the biggest such parade in 20 years on the holiday honoring the World War II victory over Nazi Germany, a day which stirs national pride more than any other in Russia.

Putin sought to maximize the surge of patriotism by also staging big parades this year in the Black Sea peninsula of Crimea, following its annexation from Ukraine.

But in a break from tradition reflecting the East-West standoff over Ukraine, Moscow and Kiev did not stage joint marches of their countries' sailors in the Crimean port of Sevastopol, where Russia's Black Sea Fleet is based.

Putin has used Crimea to whip up patriotism with the help of state media and did not miss the opportunity to stir national pride some more, with Moscow's accusations that neo-fascists are on the rise in Ukraine ringing in the ears as he praised the Soviet role in defeating fascism.

"The iron will of the Soviet people, their fearlessness and stamina saved Europe from slavery. It was our country which chased the Nazis to their lair, achieved their full and final destruction, won at the cost of millions of victims and terrible hardships," Putin said in a speech to the military and war veterans gathered on Red Square.

"We will always guard this sacred and unfading truth and will not allow the betrayal and obliteration of heroes, of all who, not caring about themselves, preserved peace on the planet."

See our photo gallery for pictures of Moscow's Victory Day Parade and more.

Moscow has in the last few weeks repeatedly warned of the dangers posed by leaders it portrays as neo-fascists in Ukraine, and urged Europe to prevent the rise of the far-right, although some Putin critics have made similar accusations against him.

The crisis has raised international concern that Russian troops could intervene to stop deadly clashes between Ukrainian forces and pro-Russian separatists in Ukraine's east and southeast.

Despite the tradition of Russia and Ukraine celebrating May 9 together, Ukraine's new pro-Western officials banned parades in the capital Kiev, fearful they could be targeted by pro-Russian "provocateurs" hoping to discredit the government.

Prime Minister Arseny Yatsenyuk, after attending a ceremony in Kiev's St. Volodymyr's Cathedral, highlighted how the relationship had changed.

"It turned out that 69 years ago, we, together with Russia fought against fascism and won. History is repeating itself but in a different form," he said.

While Russia had stood alongside Ukraine in the past, "now Germany, Britain and the U.S. are standing shoulder to shoulder with us". 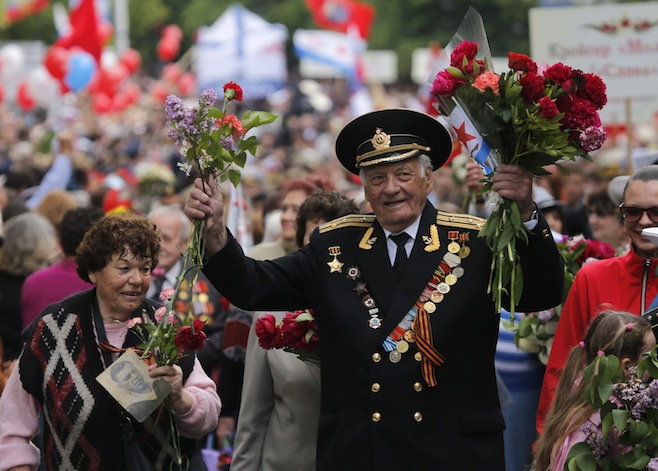 A former Soviet serviceman holds flowers during celebrations to mark Victory day in the Crimean port of Sevastopol.

The Soviet Union lost more than 20 million people in World War II and the end of fighting in Europe was marked in cities across Russia, including Vladivostok in the Far East.

In Sevastopol, home of Russia's Black Sea Fleet, servicemen and veterans marched in a parade that also included armored vehicles and anti-aircraft missiles.

Banners read "Sevastopol without fascists" and "It's our duty to remember".

"I'm here to prevent any provocations from the fascists. I served in a self-defense unit in March, and I consider it my duty to be here," said Natalya Malyarchuk, 52, a resident of Sevastopol, wearing a red arm band saying "Patrol."

Factory worker Vasily Topol, 31, wearing a white T-shirt with an image of Putin in dark sunglasses and the words "Russia's Army", said life had improved since Crimea joined Russia.

"We have the greatest admiration for Putin, we are morally and materially better off since Crimea became part of Russia. My salary has risen by 2.5 times," he said, speaking on an embankment overlooking Russian warships.

The end of fighting in Europe is marked by all generations in Russia and old soldiers and young children were among the crowds watching the Moscow parade.

For several weeks, students have been handing out orange and black St. George ribbons derived from an ancient Russian military award that was revived in the 1990s and has come to symbolize the sacrifices of World War II. Putin wore one himself, as have many of the separatists in east Ukraine.

Ukraine and Russia have repeatedly accused each other of shelling around the Zaporizhzhia nuclear plant, the largest in Europe.
ukraine_war

The parliament urged the EU to stop issuing tourist visas for Russian and Belarusian citizens and to cut down on entry visas in general.
navigating the maze