Contribute Today
By Grace Cuddihy
May 5, 2014

Fans of writer Gary Shteyngart might have been scratching their heads in confusion upon hearing of the release of his memoir "Little Failure." The previous three novels of the wildly-popular author have been so blatantly based on his own life — hilariously self-deprecating tales of larger-than-life characters who grapple with family problems, sexual obsession and the culture clash experienced by immigrants in a new land — that it may seem like a memoir is unnecessary. But the latest Shteyngart outing is arguably his best work to date.

Shteyngart tells us that "coming to America after a childhood spent in the Soviet Union is equivalent to stumbling off a monochromatic cliff and landing in a pool of pure Technicolor." This is one of the primary themes of the memoir — the sense of dislocation experienced by immigrants, fiercely struggling to fit into their new, alien environment, but tortured by memories of the land they left behind.

His family was part of a fascinating and little-known part of Soviet history. Shteyngart's story reveals the hardships faced by Russian Jews who were permitted to leave the Soviet Union in the 1970s, ostensibly to emigrate to Israel, but many chose the U.S. or European countries as their final destination. Global Jewish Advocacy estimates that there are about 700,000 Russian-speaking Jews in the U.S. and the majority live in New York, especially in areas such as Brighton Beach in Brooklyn and Forest Hills in Queens.

Though Shteyngart's family is not overtly religious — despite being pressured into circumcising Gary, a traumatic incident related in the book — the memoir offers a fascinating glimpse into the lives of Soviet Jews, as they assimilated into American society. As Shteyngart described "We Soviet Jews were simply invited to the wrong party. And then we were too frightened to leave. Because we didn't know who we were."

Refusing to follow a dull chronological order, the memoir drifts back and forth between Shteyngart's childhood in Leningrad — he emigrated to the U.S. in 1979 — and the glittering world of 1980s America. The starring roles in Shteyngart's energetic, though sometimes rambling, story, are his parents. It is fascinating to learn about the obvious impact they had on his development. Somewhat different from the usual "suffocating Jewish parents" stereotype, they at times treat their son quite cruelly and seem perpetually disappointed in him. Suffering from asthma as a child, they resorted to holding his mouth open with a spoon to help him breathe at night, before they discovered the wonders of an inhaler upon arriving in the West. His father nicknamed him "Snotty," his mother, "Failurchka."

Obviously disappointed with his choice of university and degree, it seems they continue to give the long-suffering author a difficult time today, even though he enjoys something of a cult following for his offbeat, quirky humor. His parents find bad reviews of his work online and present them to him as evidence of his imminent failure. His father tells him "I read on the Russian Internet that you and your novels will soon be forgotten." But Shteyngart takes this treatment with good grace, though the humor is self-deprecating, it is never self-pitying. When a girlfriend points out the cruel behavior of his parents, he replies that it is "just cultural." 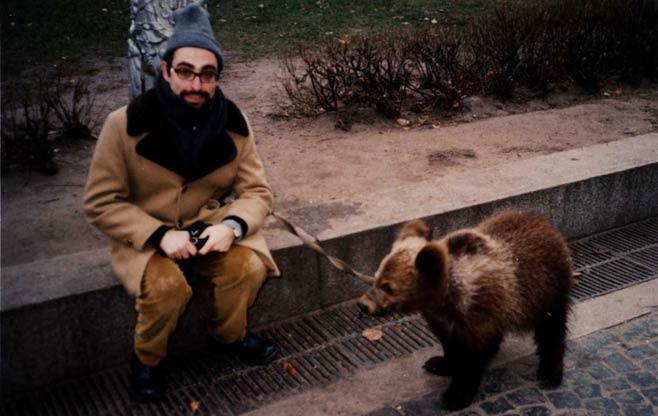 Russian-American writer Gary Shteyngart gets in touch with his roots.

Each chapter begins with a photo from the author's life and even here, the laughs never stop, Shteyngart's dry tone is present everywhere. A picture of his father's Jewish family is captioned with "almost everyone will die soon." The final photo of the book is a photo of his parents, who look happy and relaxed together. Shteyngart wryly notes that their marriage, which he often worried would end in divorce, seemed to improve exponentially after he left home. Though his relationship with his parents is complex, this tough love has made him who he is, and has provided ample material for his books.

Gary quickly becomes the second-most bullied child in school, commenting that he cannot even succeed in being the most-hated boy in his class. There is an overwhelming feeling throughout the book that he believes his parents and he is second-rate. He is a strange boy with an odd accent. He also discovers that telling stories in class gives him added popularity and his creative development as a writer is traced throughout his childhood and early adult years. Things do not improve much as time goes on — he spends his college years drunk and stoned, and dabbles with politics, campaigning for George Bush Sr. in the hope that girls will find him irresistible.

The perennial loser, he feels like he is on the outside looking in on the American dream. Though he clearly does not belong in contemporary Russia either. His description of a trip there with his parents pulses with a sense of alienation and a sense of exclusion. He tries to get in the mood "I've shared vodka shots with weeping policemen … slipped on innumerable patches of ice, nearly been sliced in half by a Georgian ruffian; in other words, done all the things one normally associates with a trip to the former Soviet Union," but it is hopeless. Shteyngart perfectly captures the experience of the immigrant — a feeling of not belonging anywhere.

Destined to play the role of the observer and dealing with his own feelings of alienation and inadequacy, Shteyngart manages to pull off a very funny, unique, but also sad, memoir. Shteyngart's escapades, described in his own inimitable, dry way, make the reader both laugh and squirm with embarrassment on the author's behalf. If you are only going to read one Shteyngart, make it this one.