With the latest restrictions on high-technology defense articles and services announced Monday as part of new U.S. sanctions on Russian officials and businesses over the conflict in Ukraine, Washington is playing a dangerous game that may wipe out two decades of closely cultivated commercial ties between the Russian and U.S. space industries.

The moves will have far-reaching implications for U.S. national security, a high-level U.S. space industry leader told The Moscow Times, speaking on condition of anonymity because of the sensitivity of the issue.

Considering that in 2013, Russian launch vehicles were used to transport just under half of all commercial satellites into space, the U.S. State Department may be jeopardizing national security interests in the near term, since a number of the satellites "may have Department of Defense-hosted payloads on them or have national security customers," the industry source said.

Moreover, "about half of all U.S. military communications go through commercial satellites. So there is a national security balance that is being calculated … not only in terms of economic fallout for U.S. companies and projects, but also national security concerns," she said.

Never at a loss for words, Russian Deputy Prime Minister Dmitry Rogozin, who oversees the Russian space industry, mocked U.S. policy, saying that "they do not understand that these sanctions will boomerang back on themselves."

Rogozin also tweeted that the "the U.S. should consider getting its astronauts to the International Space Station using a trampoline."

The export restrictions, initially implemented in late March, prevent the sale and shipment of any U.S.-built spacecraft — including anything that uses U.S. components, such as most European-made satellites — governed by the International Traffic in Arms Regulations, or ITAR, "to the geographic country of Russia and to Russian interests," the industry official told The Moscow Times.

The term "Russian interests" is new to this round of export license restrictions, the industry source said, and "unlike other regulatory actions where there is a list and we know exactly what it includes, this is a little interpretive," making it unclear exactly what this means for the industry.

Although the license restrictions effectively prevent Russia from purchasing Western space hardware, Moscow is free to pursue commercial interaction with industries not regulated by ITAR, such as China's space industry, providing further impetus for Russia to pursue closer defense and space relations with China. 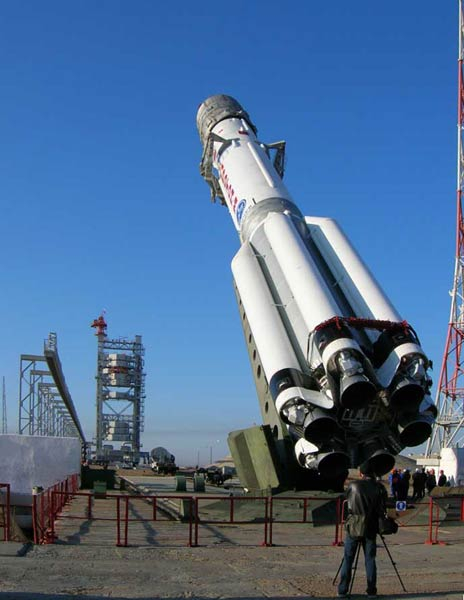 A Proton-M rocket preparing for launch at the Baikonur Cosmodrome.

"We have no doubts that within the framework of international labor division we will successfully build spacecraft and platforms for them that will be free from ITAR restrictions," he said, adding that this could be done by developing domestic technologies and tapping into European, Chinese and U.S. hardware that is not covered by ITAR regulations.

Regardless of the Russian ability to weather these restrictions, the U.S. decision will be a significant blow to the Russian commercial launch industry — a significant source of nongovernment funding for the Russian space industry — and therefore potentially opens the door to a Russian reprisal against U.S. space efforts in the long term.

Prime among these vulnerabilities is the U.S. dependence on a valuable Russian rocket engine — the RD-180 — that currently surpasses the capabilities of anything produced domestically. This engine is produced solely for export to U.S. customers by Russia's Energomash, a subsidiary of state-owned Energia Rocket and Space Corporation, which also owns Sea Launch, one of the companies that will be hardest hit by export license restrictions.

These engines are used to power the first stage of the Atlas V rocket, the workhorse of the U.S. launch fleet, which is frequently called upon to lift U.S. Air Force, National Reconnaissance Office and NASA payloads into orbit.

Although the U.S. has about two years worth of RD-180 engines stockpiled on American  soil, it is vulnerable to a potential Russian ban on their export. U.S.-made engines are nowhere near as capable as their Russian counterparts, and there is currently no competitor in development. Calls have recently been made on Capitol Hill to pursue a crash program to develop a U.S.-made RD-180 to no avail.

Concern that the RD-180 supplies are unreliable is buttressed by the fact that last year, the Russian Security Council openly discussed implementing an export ban on the engines in light of their value to the U.S. military and intelligence community, but with no Russian domestic demand for the RD-180s, no action along these lines has been taken.

Last week, Ostapenko said that Russia had no intention of halting exports of the RD-180, but stressed that the status of these exports depended on U.S. actions.

If Russia bans exports of the RD-180, it will be a harsh blow to U.S. national security interests.

The danger comes from the impact that the license restrictions will have on the two major U.S.-Russian joint ventures responsible for selling Russian commercial launches on the international market: International Launch Services, based in Reston, Virginia and Sea Launch, based in Long Beach, California.

The U.S. government has limited these companies' access to Western customers by restricting exports on high-technology defense articles and services to Russia and "the occupied territory of Crimea" by restricting the issuance of new export licenses and moving to restrict existing ones, U.S. State Department spokeswoman Jen Psaki said in a statement on the agency's website Monday.

U.S. launch providers such as United Launch Alliance and SpaceX have fully booked launch schedules for the next two years, and will not likely have the production capacity to meet a surge in demand. 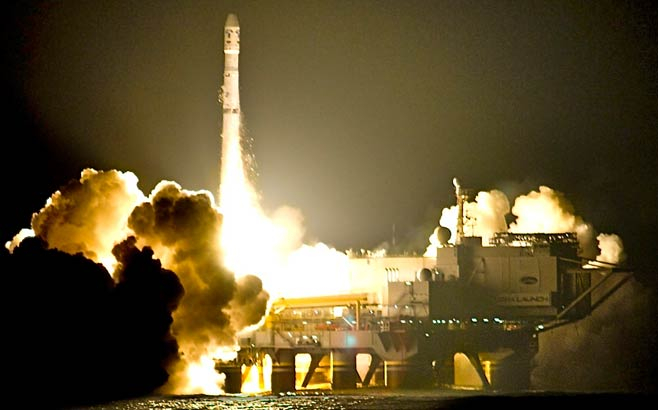 A Sea Launch Zenit rocket blasting off from its floating launch pad on the Pacific Ocean at the Earth's equator.

The export restrictions followed a Canadian government decision last week to pull a maritime services satellite from launching aboard a Russian Soyuz rocket at the Baikonur Cosmodrome in Kazakhstan in June.

Meanwhile, International Launch Services, or ILS, which sells commercial launches of the venerable Proton-M rocket, said that no changes have been made to their launch manifest.

"ILS is actively reaching out to key U.S. government decision-makers in order to inform them of the importance of Proton to the U.S. and international commercial satellite market," Monaghan said.

If ILS is cut off from Western launch customers, it will likely be able to stay afloat despite the U.S. export restrictions by virtue of its exclusive contracts with Russian companies such as Gazprom Space Systems.

Its survival prospects may not even ultimately be tested. Monaghan said ILS has not yet received any indication from the U.S. State Department that its existing export licenses are being revoked, and stressed that the company is pursuing its launch manifest as planned.

Sea Launch, on the other hand, is significantly more vulnerable.

Since its creation in 1995 as a joint venture between Russia's Energia, the U.S.' Boeing and two other companies, Sea Launch has successfully launched its Ukrainian-built Zenit-3SL rocket 31 times from its floating launch pad on the equator.

However, in recent years the company has fallen on hard times. 2014 was intended to be a make or break year for the company after its operations were temporarily suspended when it suffered a launch failure in January 2013.

The crisis in Ukraine has not only jeopardized Sea Launch's access to Western customers, it has also brought about a serious supply chain problem pending a complete breakdown in commercial relations between the Russian and Ukrainian space industries — a scenario that would spell an end to Sea Launch.

"Our rocket stages are manufactured in Ukraine using approximately 70 percent Russian components … so to the extent that the Russian-Ukrainian conflict escalates, the ability to get hardware out of our supply chain would potentially come into question," said Peter Stier, vice president of sales and marketing at Sea Launch.

The Zenit 3SL rocket is manufactured by the Yuzhnoye Design Bureau and Yuzhmash machine works in Dnipropetrovsk in Ukraine, but 70 percent of its components are manufactured by Energia in Moscow.

"Certainly in the long run cooperation between Ukraine and Russia is essential for us, for our company, in order to survive," said Stier.

RSC Energia has poured significant funding into Sea Launch, having rescued the troubled joint-venture from bankruptcy in 2010 and becoming the 95-percent majority owner of the company.

It is important to recall the rationale for all of this interdependency, the space industry source said.

"There was an original concern about the space sector and space capabilities being captured by the right countries at the end of the Cold War, and that those were not being diverted for economic gain to other more harmful customers. I think that is still an abiding concern," the source said.

Due to an editing error, an earlier version of this story incorrectly cited Interfax reporting that export license restrictions had lead to the cancellation of Luxembourg and Turkish communication satellites slated to launch aboard International Launch Services Proton-M rockets from the Baikonur Cosmodrome this summer. It has also been updated with comments from ILS clarifying that none of their launches have been cancelled as a result of U.S. State Department export license restrictions.