HORLIVKA, Ukraine — A pro-Russian mob on Monday seized a police building and gunmen took control of a military airport in Russian-leaning eastern Ukraine, defying government warnings that it was preparing to act against separatists.

Dozens of angry men hurled rocks, smashed the windows and broke into a police station in the city of Horlivka not far from the border with Russia, and flew the Russian flag from the building. Hundreds of onlookers outside chanted "Referendum!" and "Russia!" A video posted online showed a policeman confronting a separatist, then being beaten by the mob and taken away in an ambulance. Other policemen switched their allegiance to the demonstrators.

The events in Horlivka were the latest sign of trouble in Russian-speaking eastern and southern regions, in which pro-Russian gunmen have seized or blocked government buildings in at least nine cities demanding more autonomy from the central government and closer ties with Russia. Later in the day, armed men in masks also seized control of a military airport outside the city Slovyansk, also in the Donetsk region.

The developments came as European Union foreign ministers met in Luxembourg to consider further sanctions against Russia, and three days ahead of a scheduled conference in Geneva involving diplomats from the U.S., Russia, EU, Ukraine and Switzerland, which is intended to seek ways of defusing tensions.

One of the men directing the raid in Horlivka introduced himself as a lieutenant colonel of the Russian Army to a line of policemen who switched sides, but he did not state his full name. The man, dressed in green camouflage uniform, instructed them to obey their new chief and to attach St. George's ribbons to their uniforms, which have become a symbol of pro-Russian protesters in eastern Ukraine.

The episode fed into accusations by the government in Kiev and Western officials that the protests are being instigated by the Kremlin and that some of the insurgents are Russian agents.

Oleksandr Sapunov, one of the men who took part in storming the police building in Horlivka, said the insurgents were fighting against appointees of the Kiev government, including the local police chief, and wanted to appoint a leadership of their own.

"The people came to tell him that he was a puppet of the Kiev junta and they would not accept him," Sapunov said.

Acting Deputy Interior Minister Mykola Velichkovych acknowledged Monday that some police officers in eastern regions were switching sides. "In the east we have seen numerous facts of sabotage from the side of police," Velichkovych told reporters. 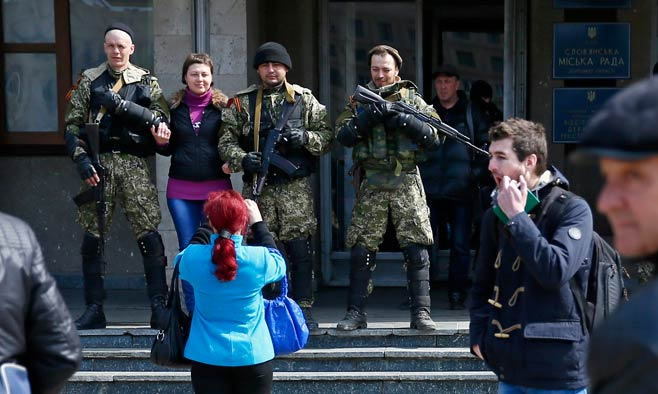 A Slovyansk resident posing for a photo with pro-Russian armed men.

The events echoed those in Crimea, which was annexed by Russia last month after key regional facilities were seized by Russian troops aided by local militiamen.

Ever since pro-Russian President Viktor Yanukovych fled to Russia in late February, Russia has demanded constitutional reforms that would turn Ukraine into a loose federal state.

After refusing demands for a referendum by separatists in the east, acting President Oleksandr Turchynov indicated Monday that holding a nationwide referendum on the nation's status was a possibility and that such a vote could be conducted on May 25, along with presidential elections. Turchynov expressed confidence that Ukrainians would vote against turning the country into a federation and against its breakup.

Meanwhile, a deadline set by the Ukrainian government for pro-Russian gunmen to leave government buildings in eastern Ukraine and surrender weapons passed early Monday, with no immediate sign of any action to force the insurgents out.

There was no immediate comment from the government on the deadline passing.

But Serhiy Taruta, governor of the Donetsk region, where government buildings in several cities, including the regional capital Donetsk, have been seized by pro-Russian gunmen, said an "anti-terrorist operation" was underway in the region, according to Interfax.

Taruta gave no details of what the operation would entail and there were no signs of increased police presence on the streets of Donetsk on Monday. The governor usually does not have authority to launch such measures on his own and he was likely acting on the orders of top security officials in Kiev.

Taruta said the action would be aimed at "protecting the peace and order on our land, which today is being taken away from us by armed, aggressive fanatics cynically and cold-bloodedly." "They are terrorists and we will not let them rule on our land." He did not provide any details of the operation.

Vadim Karasyov, a political analyst in Kiev, said the Kremlin was using the ousted president, Viktor Yanukovych, to help foment separatist tensions. "The Kremlin is implementing its scenario in the east, using Yanukovych and his loyalists, while Russian instructors are running the show," Karasyov said.