LUGANSK, Ukraine — Armed pro-Russia separatists in the eastern Ukrainian city of Lugansk rejected Kiev's offer of amnesty for those who seized government buildings this week and called on others to defy the pro-European government in Kiev.

Protesters wearing bulletproof vests and armed with Kalashnikov rifles, pistols and other guns inside the security building, a former KGB headquarters, said they would only lay down their weapons if Kiev agreed to hold a referendum on the future of the region.

"We demand concretely a referendum on federalization so that the will of the people is heard," said Alexei Kolekin, one of the protest leaders barricaded into the five-story building in Lugansk.

The demands, which echo the steps the Ukrainian territory of Crimea took before it declared independence and voted to join Russia, have been rejected by Kiev, which says the occupations are part of a Russian-led plan to dismember the country.

Tensions have risen in the mainly Russian-speaking east since the overthrow of Ukraine's Russian-backed president, the installation of a new pro-European government and Moscow's annexation of Crimea, creating the largest confrontation between Russia and the West since the end of the Cold War.

U.S. Secretary of State John Kerry has accused Russian agents and special forces of stirring up separatist unrest, which Russia has denied.

In Kiev, Ukraine's Interior Ministry repeated the threat of force to clear the state buildings.

"We are trying to find a compromise, but the demands put forward by the occupiers are unacceptable. Our aim is to avoid the use of force, but that option remains in place," Deputy Interior Minister Serhiy Yarovy told journalists.

Interior Minister Arsen Avakov said Wednesday that he expected the situation to be brought under control within 48 hours, with force if necessary.

But acting President Oleksandr Turchynov struck a softer tone, saying he hoped to avoid bloodshed and proposed that protesters holding buildings in Lugansk and Donetsk would not be prosecuted if they left the building and surrendered their arms. 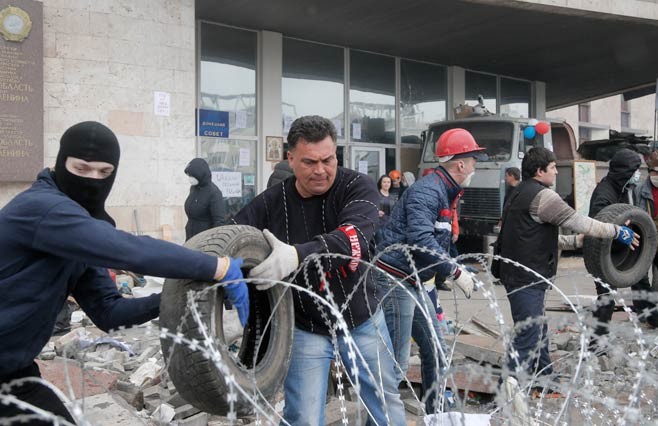 Pro-Russia activists fortifying a barricade in front of a building in Donetsk.

Activists at both buildings said they would continue talks with the government, but said the current offer was not enough.

"They offered amnesty, but there is no movement on a referendum for federalization," said Alexander Gureyev in Lugansk.

"We are not going to accept an amnesty without a referendum," he said by telephone.

Protesters, many of whom say they have served in Afghanistan and Chechnya, seized the Lugansk state security building on Sunday along with its weapons arsenal. A strict military order has been imposed in the building.

Without electricity in much of the building, the men, wearing commandeered security services gear, used flashlights and candles.

Barricades made of bookshelves have been erected in every corridor to complicate any potential storming by the authorities.

Outside, between 100 and 200 people stood in the pouring rain in solidarity with the protesters, who called on compatriots in other parts of eastern Ukraine to join their cause.

"Brothers of southeast, let us work together. Please help us. We need a turnaround. We have to accomplish what we came here to do," said protest leader Kolekin.

In Donetsk, protesters have occupied the regional administrative building where some have called for the creation of a Donetsk republic. Some 1,500 protesters were outside the building on Thursday in solidarity with the separatists.

The presence of tens of thousands of Russian troops near the border with Ukraine has sparked worries they could intervene in the crisis, though Russia has repeatedly sought to ease concerns.

"Russia has stated many times that it is not carrying out any unusual or unplanned activity on its territory near the border with Ukraine that would be of military significance," the Russian Foreign Ministry said in a statement on Wednesday.

NATO General Secretary Anders Fogh Rasmussen said Thursday that some 40,000 Russian troops were massed along Ukraine's borders "not training but ready for combat" and warned that Russia must pull back its troops from the Ukrainian border as a first step to start dialogue over the crisis.

Russia hit back Thursday at widely reported data which placed the country as a leader in new HIV infections worldwide as “provocative propaganda...