Grigory Revzin, an architectural critic who had been selected to curate Russia's pavilion at the 2014 Venice Biennale of Architecture, announced Monday night that he had been fired by direct order from Culture Minister Vladimir Medinsky.

"I just got a call from the Culture Ministry and was told that this morning Minister Medinsky personally decided to fire me," Revzin wrote on his Facebook page, adding that he believed the firing was due to a column he wrote for Lenta.ru on March 2 that criticized Russia's policy on Ukraine.

On Tuesday, the Culture Ministry announced that Semyon Mikhailovsky, head of the St. Petersburg State Academic Institute of Art had been appointed to replace Revzin. Mikhailovsky does have prior experience organizing exhibitions, though he has not yet worked on a project on the same magnitude as the Venice Biennale, a world-renowned forum for architecture that receives considerable media attention. 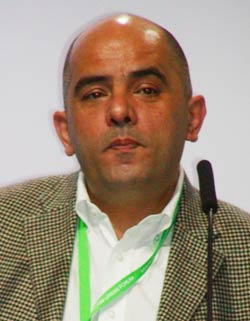 "Semyon Mikhailovsky will replace Grigory Revzin, whose very active creative and journalistic work has recently prevented him from fully participating in the project, preparations for which are proceeding at full speed," Deputy Culture Minister Yelena Milovzorova said, Interfax reported.

Revzin, a historian and architectural critic, was first appointed commissioner of the Russian pavilion in 2010, and in 2012 he presented the Skolkovo project, for which he was awarded the Venice Prize, the second-place award for the biennale.

Revzin's column on Lenta.ru expressed surprise at Putin's decision to intervene in Ukrainian internal affairs, saying that "sending the military into Ukraine is a risk, a card game: the adventurous Saakashvili might play this way, but Putin — what happened to him?"

The column further expressed a belief that any possible conflict in Ukraine would unite educated Russians against Putin. "War — this is a transformation of all Western-leaning citizens — that is, the absolute majority of successful, educated, self-sufficient city dwellers — into a fifth column," Revzin wrote.

However, Revzin's column is not wholly critical of Putin's actions, and in fact expresses a certain amount of sympathy with the president's position, describing attempts to portray Putin's government as a reincarnation of Stalin's Russia as "fake," noting the wide divide between "millions of repressed individuals [under Stalin] and the seven sentenced in the Bolotnoye Case."

Lenta.ru itself has been pressured by the government in recent weeks, with long-time head Galina Timchenko forced out and replaced by Alexei Goreslavsky, the reputedly pro-Kremlin former head of Vzglyad.ru, after receiving an official warning about possible "extremism" charges. Following the change in leadership,  at least 39 of Lenta.ru's staff members, including 32 journalists and all of its photo editing staff, quit in support of Timchenko.

With only three months remaining until the opening of the biennale, the change in leadership comes at an inopportune time. With Revzin's strong track record in the two biennales he previously managed, Mikhailovsky will have big boots to fill as he gets up to speed on plans for the coming season.