Russia is getting out its checkbook to bankroll the region of Crimea, newly incorporated into Russia following its rapid annexation last month.

Moscow has pledged to spend billions of dollars on everything from higher pensions to a bridge linking Crimea to Russia, with almost $7 billion earmarked for the peninsula this year alone.

It isn't all expenses. Russia stands to save billions of dollars on rent it paid for the Sevastopol naval base of the Black Sea Fleet, and has also acquired valuable property and natural resources in Crimea.

But Ukraine is counting the costs, and has vowed to hit Russia with lawsuits running into hundreds of billions of dollars.

Below is a summary of the various financial costs and claims made by both countries in relation to Russia's takeover of Crimea.

Benefits to Russia / Costs to Ukraine

Russia has formally denounced the 2010 Kharkiv Agreements under which Russia provided a $100 discount per thousand cubic meters for Ukraine's imports of Russian gas as rent for the Sevastopol naval base, home of Russia's Black Sea Fleet.

The deal, which extended the base lease until 2042, cost Russia's budget around $4 billion a year, or around $40 billion over the period covered by the gas contract expiring in 2019.

Russia says it is owed $11 billion already paid to Ukraine for the years 2010-13, when the discount was applied in advance for extending the lease on the base beyond 2017.

Ukraine says it regards the agreement as still valid and has vowed to take Russia to court for violating it. It has also threatened legal action against Russia's gas exporter Gazprom to lower gas prices, a step used successfully by other countries.

Reducing the price to the average for European customers would in effect negate the benefit to Russia from annulling the gas-for-base agreement, as Ukraine pays around $100 more than the average price following the end of its discount. 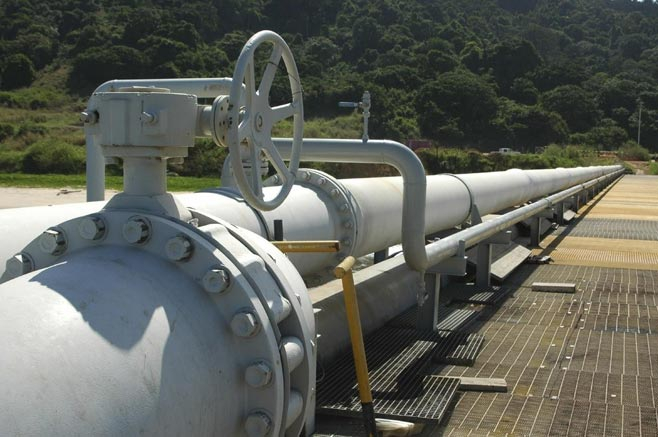 Analysts estimate the value of such reserves at around $800 million to $1.2 billion, based on how much such resources are typically acquired for in regional energy deals.

However, Crimea's natural resources wealth could in fact be significantly higher, with an estimated 2.3 trillion cubic meters of gas in unexplored offshore fields.

Using similar valuation methods, such possible reserves are worth around $7 billion, but the value could double if the reserves are proven.

Ukraine has estimated the cost of lost natural resources and related facilities at 127 billion hryvnia, including businesses, 198 active fields and 380 prospective ones.

Ukraine says it is preparing a case against Russia in the international maritime tribunal over its ships in Crimea.

Crimea has nationalized other state property in Ukraine such as the buildings of government ministries and agencies, educational institutes and subsidiaries of state companies.

The nationalized property includes 131 agro-industrial enterprises, including renowned vineyards, and 130 objects of tourist infrastructure, as well as seven ports. Ukraine's parliament has said that in total there are 57,800 objects of state property in Crimea.

No figure has yet been placed on the value of property besides military equipment and natural resources, but it is likely to run into billions of dollars.

Russia has vowed to raise pensions and public sector wages in Crimea to Russian levels, which involves doubling pensions for around 600,000 pensioners and pay for around 140,000 state sector workers.

Russian officials have put the annual cost of higher state pensions at 36 billion rubles per year.

According to an analysis by a Russian senator, the annual cost of higher pensions reaches 70 billion rubles when military pensions are included, reflecting the large number of retired servicemen in Crimea.

Raising the average pay of 140,000 public sector employees from the Crimean average to the Russian average would cost around 30 billion rubles a year, based on official pay statistics.

Even before the promised increases in public sector pay and pensions, Crimea's budget received subsidies from the central government, which were projected at 3 billion hryvnia in 2014. Russia's Finance Ministry values the subsidy at 55 billion rubles this year, including the initial costs of raising pay and pensions.

Russia has made various promises about building new infrastructure to bolster its links with Crimea and reduce the region's dependence on Ukraine.

Depending on the route and capacity, a new gas pipeline to Crimea could cost between $200 million and $1 billion.

Russia has also promised to spend generously on upgrading public infrastructure in Crimea such as schools, hospitals, roads, airports, the water supply system and a new university. It has pledged to support agriculture, including 80-100 combine harvesters for immediate dispatch.

Russia's finance minister has said Russia is preparing to spend up to 243 billion rubles to support Crimea in 2014, including both recurring expenditure on higher pensions and wages, and one-off infrastructure spending.

Ukraine has threatened Russia with lawsuits worth "hundreds of billions of dollars" in response to Russia's occupation of Crimea. The lawsuits will cover both the seizure of Ukrainian state property in Crimea, and also Russia's breaches of international and bilateral agreements.

The resulting legal battles could last decades, leading to huge uncertainty over the final bill and the fate of Russian property in Ukraine, which could be impounded.

The risk of Ukrainian lawsuits also means that most foreign investors are likely to shun Crimea, increasing the economic burden on Russia. 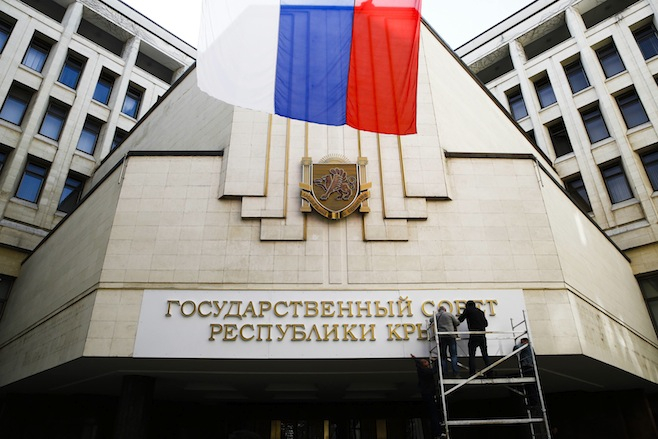 Workers put up a new sign at the local parliament building in Simferopol, Ukraine.

The international tensions around Ukraine have exacerbated a fall in investment in Russia and an outflow of capital that have already had a major negative impact on Russia's economic growth.

The Economic Development Ministry, which had originally forecast a growth of 2.5 percent in 2014, now expects it will be well below 1 percent. The World Bank has warned the economy may shrink by 1.8 percent if the Ukraine crisis deepens.