The Kiev government will stick to unpopular austerity measures "as the price of independence" as Russia steps up pressure on Ukraine to destabilize it, including by raising the price of gas, Ukraine Prime Minister Arseniy Yatsenyuk said.

Yatsenyuk, who stepped in as interim prime minister last month after Viktor Yanukovych and his ministers fled Kiev in light of Euromaidan protests, conceded that it would be very difficult "under the current Russian presence" to undo what he described as Russia's "international crime" in seizing Crimea.

But he said Ukraine would never recognize the Russian takeover in exchange for re-establishing good relations.

"I want to be perfectly clear. We will never recognize the annexation of Crimea ... The time will come when Ukraine will take over control of Crimea," he said, speaking in English, seated in his cavernous, Soviet-built government headquarters beneath the blue and yellow Ukrainian flag.

Yatsenyuk has called himself the leader of a "kamikaze" government, doomed by unpopular austerity measures it must take, but he said Ukraine would stick to the measures, which include doubling gas prices for domestic consumers from May 1 and holding down state pensions and salaries against a background of a 3 percent contraction of the economy and double-digit inflation.

Support from the International Monetary Fund — involving a $14-18 billion financial lifeline in return for tough economic reforms — would be a "tremendous step forward", he said.

"We will regain trust and credibility from foreign investors. This is the roadmap for Ukraine," he added.

The Kiev government has said that without the IMF-mandated austerity measures, the economy could shrink by up to 10 percent this year.

A man sitting in front of an improvised fortress on Maidan Square on March 24. (Pascal Dumont / For MT)


Yatsenyuk, a former economy minister, lawyer, and economist by education, has often been regarded as too aloof and intellectual to be a contender for high office in Ukraine, which he told the Kyiv Post newspaper in December 2012 was "because I'm bald and wear glasses."

Like most of the former opposition leaders, he had difficulty connecting with the thousands of angry Ukrainians massed on Kiev's Independence Square  during the three months of protests that finally toppled Yanukovych.

But he is also working hard to improve his image at home, especially by reaching out to the Russian-speaking population, which is concentrated in the east and south of the country and seen as fertile ground for Russian troublemakers to foment unrest against the Kiev government.

Commentators say he also impressed Western leaders during visits to Washington and Brussels last month with his clear-sightedness.

When asked about the support Kiev was getting from the West in dealing with Russia after the Crimean annexation, he replied. "Is the world ready for World War Three? I am absolutely sure it is not ready."

He said that though Western sanctions against Russia, which were limited to targeted travel and financial restrictions against a list of individuals and a few businesses, were understandable, they had allowed Russia to apply stronger pressure.

This took the form of trade pressure as well as incitement of unrest among the Russian-speaking population to undermine and destabilize the central government. 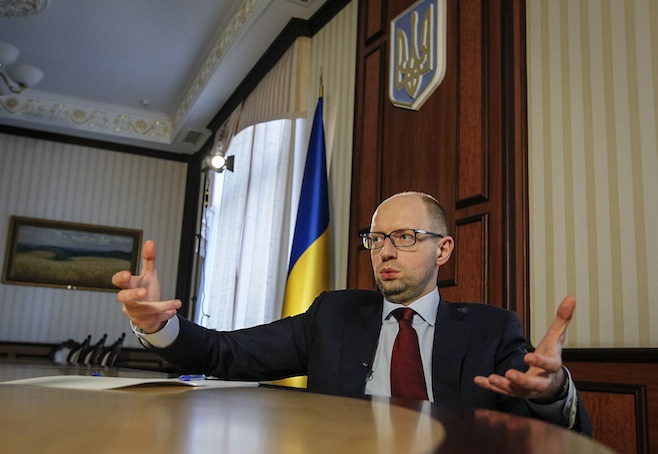 The subtext of Russia's message to Ukraine's Russian-speaking population, he said, was that they would enjoy higher living standards in Russia, with higher wages and better pensions and without the austerity that the Kiev government was now offering.

"They're saying: if you go to Russia, you'll be happy, smiling, and not living in a Western hell," he said.

"They [the Russians] are trying to compensate [for the Western sanctions]. But we can pay the price of independence," he said, with financial support from the West.

Yatsenyuk portrayed Moscow's annexation of Crimea as part of a wider plan by Russian President Vladimir Putin to re-impose control over states that had once fallen under the control of the Soviet Union.

He said the seizure of Crimea, along with Russia's war with another ex-Soviet republic, Georgia, in 2008, was part of this wider plan.

He recalled Putin's comment in 2005 that the biggest geopolitical disaster of the last century was the collapse of the Soviet Union.

"My quote is this," he said. "The biggest disaster of this century would be the resurrection of the Soviet Union. This is his idea. This is his goal."