SOCHI — Little over a month ago, Sochi's freshly built Olympic Park was buzzing with athletes and sports fans reveling in the festive atmosphere of the Winter Games. Even more recently, Paralympics participants and spectators made for a lively scene.

But only construction workers occupy the Park now. Renovations are already underway, to disassemble the temporary pavilions and ready the space for the next event — a Formula One race — that will attempt to draw visitors to use the infrastructure and thousands of hotel rooms constructed for the Olympics.

The government wants to transform Sochi, where $51 billion was spent to ready the city for the Games, into a world-class resort that Russians will choose over the often cheaper options across the Black Sea in Turkey. Many are skeptical of the plan's viability.

This is what Sochi looks like five weeks after the Olympics drew to a close.

"If they do not open casinos here, this will become a ghost city," said Alexander Valov, a prominent Sochi-based blogger who watched the Olympic project closely.

The idea of a Russian Las Vegas has numerous proponents, among them members of the ruling elite such as Sberbank head German Gref. The idea of opening casinos in Sochi was discussed at a recent meeting led by Deputy Prime Minister Dmitry Kozak, who was the government's point man for Olympics preparations, Bloomberg reported last week.

President Vladimir Putin has voiced opposition to the idea of Sochi becoming a Russian Las Vegas, however. During the Olympics in February, he said bringing gambling to Sochi would deprive it of a family atmosphere, discouraging middle and upper-middle class families from coming to the resort with children.

With the idea of a gambling zone apparently off the table for now, the Olympic Park has been closed for renovations linked to the city's next major tourist draw: the Russian Grand Prix, a Formula One race set to be held in October.

Another event for which Russia had been counting on using the Olympic infrastructure, a Group of Eight summit in June, was supposed to be held at one of the mountain resorts of Krasnaya Polyana but is almost certain to be canceled. Earlier this month, the group's seven other members effectively kicked Russia out over its annexation of Crimea.

Fisht Olympic Stadium, which hosted the opening and closing ceremonies, will see changes to get it ready for future duties. Its roof will be removed in order to become a venue for Russia's national football team and to host matches during the 2018 World Cup.

Many experts say they doubt that these one-off events will be meaningful in the city's effort to attract visitors during off-peak periods, however. What Sochi needs, they say, is a group of private owners who will be interested in making their hotels and other venues profitable.

"The state must find an effective owner of this entire infrastructure, who will be interested in making a business out of it," said Alexander Vysokovsky, the head of the Graduate School of Urban Studies and Planning in Moscow.

"These venues will have to work within a market," he said.

Russian billionaires Viktor Vekselberg, Arsen Kanokov and Oleg Deripaska own thousands of hotel rooms and apartments around the Olympic Park, and Deripaska has already put the apartments that were part of the Olympic village on sale for 150,000 rubles ($4,200) per square meter.

"For this money you can buy a luxury apartment in Sochi's most expensive buildings," blogger Valov said. "I do not expect that people will line up for these flats." 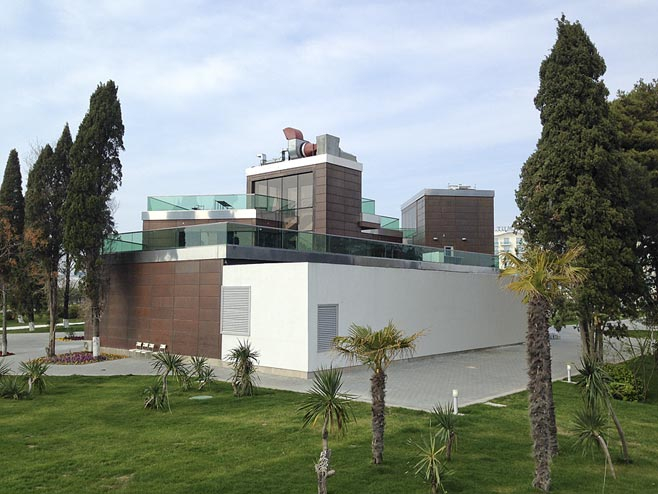 A view of one of the new facilites in the Olympic Park, where thousands of apartments were built for the Games.

Some observers think the investments made into Sochi have already paid off. According to Grigory Revzin, one of Russia's top architecture critics, the Olympics and new facilities already served their purpose by fulfilling the Kremlin's vision of showing off the country's capabilities.

"This was Putin's Olympics, it has served propaganda goals and has changed perceptions about our greatness," he wrote in an article on Lenta.ru.

On Friday, in an interview on Rossia 1, Kozak expressed determination to ensure that the infrastructure was put to use, saying "the Olympics are not over for us. We are doing everything so that these facilities, not only hotels, but sports venues, roads and streets also, are in demand."

Kozak has overseen the legacy program that was passed in Feb. 2013 and that outlines how each of the 419 newly-built facilities will be used in the post-Olympic period. Most of the objects will change ownership, passing from the Olympstroi corporation that built them to state owners at municipal, regional and federal levels.