NEW YORK — In 2007, when Torbjorn Tornqvist first emerged from the shadows of the Geneva-based oil trading empire he helped build, he had one message: President Vladimir Putin has nothing to do with Gunvor.

"We do not deny we have excellent contacts," the steely-voiced Swedish oil trader said, in what was the first interview of his 30-year career. "To involve Mr. Putin and any of his staff in this dialogue is speculation."

Seven years on, Tornqvist, 60, is still dogged by the same speculation, this time provoked by the U.S. slapping sanctions on his long-time partner, Gennady Timchenko, one of the most loyal businessmen to Putin.

The U.S. government says Putin has "investments" in Gunvor and may have access to its funds, an allegation Gunvor fiercely denies. Hours after the announcement of the sanctions — designed to put pressure on Russia for its annexation of Crimea — Gunvor said Timchenko had sold his stake to Tornqvist.

Now, with a majority stake and 100 percent of the voting shares, Tornqvist has much work to do to convince his trading partners that Gunvor can still grow and thrive without Timchenko.

"This is certainly the most challenging moment in Gunvor's history," Tornqvist said late last week. 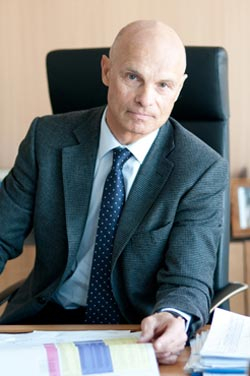 The imposing chief executive, an avid sailor with a shaven head, teamed up with Timchenko to form Gunvor in 2000. The firm has grown from a niche player in Baltic Sea oil exports into the No. 4 oil trader, handling 3 percent of the world's oil.

Gunvor says 80 percent of its business is unrelated to Russia. It has poached top traders from firms like France's Total, bought refineries in Europe and expanded into coal, natural gas and key Asian markets. With annual turnover of about $100 billion, Gunvor has 1,600 employees in 20 offices.

"Gunvor is more than one country or two people," the firm said on Twitter on Friday. "Gunvor is global."

Yet the U.S. sanctions on Timchenko have brought Gunvor's Russia ties once again to the fore. On Friday, major U.S. banks and traders scrambled to understand whether they could continue dealing with the firm. By the weekend, most appeared to believe they could.

Washington did not slap sanctions on Gunvor itself as Timchenko owned less than half the company, but the Treasury warned Americans to "act with caution" when dealing with companies that may be controlled "by means other than a majority ownership interest."

From Russia, With Oil

Tornqvist began his career the way many of the industry's top executives did: working for a major oil company. At BP, Tornqvist had a front-row seat to the birth of the modern oil market in the late 1970s and early 1980s.

He left BP in 1983 and joined Scandinavian Trading, an oil trading venture that AB Volvo had acquired several years earlier, according to a biography on Gunvor's website. The firm, known as STC, was that year in the midst of dealing with heavy speculative trading losses. By 1989, when he left STC, it was scaling back operations.

Tornqvist teamed up with Timchenko in 1997, and three years later the two formally launched Gunvor, a name that translates to "Vigilant in War" in old Scandinavian. His own name, Torbjorn, means "Thunder Bear."

Gunvor began making its name a decade ago by pioneering small shipments of Russia's fast-expanding crude oil production out of the Estonian port of Tallinn, one of the only Baltic export terminals at the time.

The firm grew spectacularly, at one point becoming the biggest exporter of Russian oil thanks to contracts with state majors such as Rosneft.

Timchenko has repeatedly denied that Putin helped him create his business empire and insisted that contracts were won at competitive tenders. Putin himself made several statements saying he never helped Timchenko.

By 2007, Gunvor was already looking further afield, seeking to get access to oil exports from Nigeria and Equatorial Guinea.

"We are confident our growth will continue but not in Russia," Tornqvist said.

In 2012, Gunvor bought its first refinery in Antwerp, the same small plant once owned by his former boss, Rappaport.

In the last few years, Gunvor ceded its leading positions in Russia to rivals such as Glencore and Vitol, and now focuses on trading in Europe and Asia.

Yet Russia remains core to Gunvor's success, with investments such as a major oil products terminal at Ust Luga, a Russian Baltic port. It is the company's single largest investment, and a lucrative, 25 million metric ton a year gateway for Russia's growing oil product exports, rivals say.

"He did exactly what all of us did — expand in new markets and buy industrial assets. And he did it very aggressively," the head of a major rival house said.

Alone at the Helm

Tornqvist now faces the future as Gunvor's sole majority shareholder with an 87 percent stake. He said Timchenko's abrupt divestment was part of a contingency plan that was worked out as the Russia crisis deepened in recent weeks.

"By Wednesday, we were pretty convinced that the sale was the only way forward for the company," said Tornqvist.

It is not known where Tornqvist raised the money to buy Timchenko's stake in Gunvor, whose industrial assets are valued at $2 billion. Timchenko and Tornqvist had each owned 43.5 percent of the firm, with the remainder held by employees.

Tornqvist said the deal was priced at a fair value but would not give any details on financing. Forbes estimated Tornqvist's net worth at $2.6 billion, making him the 15th richest Swede.

In both his personal and professional life, Tornqvist has not been easily daunted by disaster.

In May 2013, Tornqvist's huge racing boat capsized in the San Francisco Bay during practice for the America's Cup, the world's most prestigious sailing race. A crew member died after being trapped underwater.

Tornqvist, who did not participate in that race, said at the time that he was devastated. Three months later, he was on a brand new boat for another race.

"People did not believe we will come back but we did it," he said at the time.