Taras Shevchenko's birthday was March 9, 1814 and this past Sunday, Ukrainians celebrated his bicentennial. In Kiev, Maidan activists laid a wreath at his statue, Crimean Tatars carried banners advocating peace, while Ukrainian politicians from the newly formed the government led crowds in singing the national anthem. That these celebrations occurred in the midst of the ongoing conflict with Russia over Crimea makes them all the more meaningful.

Shevchenko had already been mobilized before Sunday. In Ukraine's capital, protesters against the corrupt Yanukovych regime gathered in Maidan Nezalezhnosti, or Independence Square, and invoked the Ukrainian poet in various ways: Entrepreneurial artists carved a wooden sculpture near the square, posters celebrating his bicentennial reminded protestors of his upcoming birthday, and artists such as Oleg Shuplyak included him in dramatic images of Maidan's defenders. In other cities, protesters gathered near the local Shevchenko statue, with large crowds congregating from Lviv to Lugansk. According to The Kyiv Post, there are 1,256 statues of Shevchenko in Ukraine and 128 others scattered across the globe.

The unfolding drama in Ukraine makes the appearance of Peter Fedynsky's translation of Shevchenko's "Kobzar" all the more significant. This is the first English-language edition of all of Shevchenko's Kobzar poems. He published the first collection in 1840 and would subsequently publish two more in 1844 and 1860. We owe a tremendous debt to Fedynsky, a Voice of America journalist, for making Shevchenko's "Kobzar" available in one volume. The collection also includes numerous examples of Shevchenko's paintings and drawings and essays by Fedynsky, the literary scholar Michael Naydan, and the art critic Lesia Generaliuk.

In Kobzar, Shevchenko helped to create a modern Ukrainian language and a modern Ukrainian nationhood. The poems are intricately interwoven with Shevchenko's own life: born a serf, and orphaned at age 11, Shevchenko demonstrated artistic talent in his early teens, and his poems are full of references to orphans. He traveled with his owner, Pavel Engelhardt, to St. Petersburg and gained the support of some prominent Russian artists, including Karl Briullov, who helped to buy Shevchenko's freedom. The former serf then entered the Imperial Academy of Arts as Briullov's student.

In 1840 he published the first edition of Kobzar and received enough critical acclaim that he traveled back to Ukraine. There he joined the Cyril and Methodius Society, a secret group that advocated the abolition of serfdom and the right of every Slavic nation to become independent. His activities in the group, along with poems that criticized the tsarist government, led to Shevchenko's 1847 arrest. Nicholas I was so incensed with the poet that he exiled him to an army post in Orenburg and forbade him from writing or painting.  Shevchenko managed to violate the order and spent a decade serving in the east. After Nicholas's death in 1855, prominent supporters pleaded with Alexander II for Shevchenko's release, which was granted in 1857. Still, though, the poet could not travel to Ukraine: He first went to Nizhny Novgorod and then, after another arrest, ended up in St. Petersburg. It was there, just a day after his 47th birthday and one week before the abolition of serfdom was announced, that he died of heart failure.

Kobzar's "hero" is Ukraine: the Ukrainian language, the concept of Ukraine as a nation, Ukrainian traditions, and Ukrainian history. Shevchenko consistently references physical locations, including rivers and steppe landscapes, in his poems. In doing so, he managed to map the geography of Ukrainian nationhood. In his 1837 poem, "Mad Maiden," the first in this collection, "the mighty Dnieper roars and groans", the poet makes frequent reference to the river, turning it into an important site of Ukrainianness. He would also appropriate the history of the Cossacks — Kozak in Ukrainian — as Ukrainian history.

In doing so, Shevchenko provided his readers with the glorious heritage necessary to build a sense of national belonging. The poems are replete with historical characters, including Ivan Mazepa, the Cossack Hetman who sided with Sweden and not Peter the Great in the Great Northern War of 1700 to 1725. Derided as a traitor in Russia, Shevchenko makes him and other Cossack hetmen into Ukrainian heroes. In many of his works dealing with Cossack history, Shevchenko would label their exploits "our glory," or "the glory of Ukraine," as he did in his "To Osnovianenko" (1839). 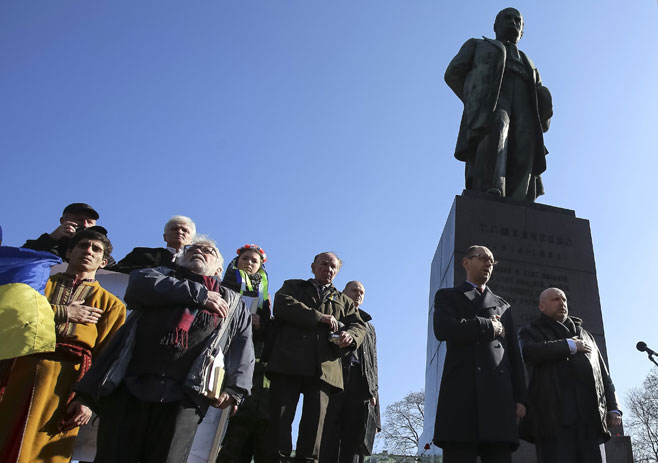 As the example above indicates, Shevchenko invoked the very name "Ukraine" innumerable times, making it a "real" place and investing it, to paraphrase the 19th-century French scholar Ernst Renan, with the nation's "soul." "Night of Taras" (1838), for example, declares that "Ukraine is saddened" because "Kozakdom is dying" within it. Its demise appears imminent because others have trampled on it, including Poles, Jews and Russians, usually referred to in the pejorative, as "Muscovites." In mapping out the differences between "foreigners" and "us," Shevchenko helped his readers to imagine themselves to be part of a separate nation. Russians again and again are identified as different, as "not us." In "Kateryna" (1838 to 1839), girls are told "to fall in love," "but not with Muscovites for Muscovites are strangers."

Finally, the title itself is telling. A kobzar was an itinerant Ukrainian bard, often blind, who traveled around the land signing epics and playing a lute-like instrument known as the kobza. Many of Shevchenko's poems have these singers as characters; others employ a musical-like cadence meant to suggest kobzar songs. "The Rambler" (1839), for example, features "an old and blind" man who "wanders all about playing on his kobza" and who "sits atop a mound" while "around him spreads the steppe." Shevchenko therefore neatly highlighted this form of culture as essentially Ukrainian while employing its very techniques to heighten the effect.

The collection includes all of Shevchenko's famous poems, including his lengthy historical epic "Haidamaks" (1841), which in many ways captures all of the poet's hallmarks, and "Dream" (1844), the poem that landed Shevchenko in hot water with Nicholas I for its unflattering portrayal of the Empress: She is said to resemble "a dried out mushroom" with "a wobbly head" while Nicholas I "is bloated, even blue; Damned in distress; From too much booze." After his first arrest, Shevchenko's poems became increasingly retrospective. The poet also worried that he might never see his beloved Ukraine again. From Orenburg, in 1850, Shevchenko would ask readers to "love our dear Ukraine" and "pray for her," while stating that "It is all the same to me if I shall live in my Ukraine or not" because "our glorious Ukraine" will still be "ours." Ten years into his exile, Shevchenko would question for whom he writes and to ask "Why is it that I love Ukraine?" Although he felt he had "reached the brink of ruin," he answered "But still, I love my vast Ukraine."  In his last poem, written in St. Petersburg in February 1861, Shevchenko would end by recalling "the Dnieper and Ukraine, the happy villages in groves, the lofty mounds upon the steppes — and cheerfully we will sing …"

The story of Shevchenko and his collection of poems is also one involving Russian authorities and those who supported Ukrainian nationhood. The work of Ukrainian secret societies, particularly after the 1863 Polish uprising, once again raised the problem of nationalism within the empire and led the imperial government to clamp down on the Ukrainian language. This effort culminated in the so-called 1876 Ems Ukase — named after the German spa town Alexander II was vacationing in at the time — that banned the publication and importation of all Ukrainian-language publications, including Shevchenko's. Just a decade after his untimely death, Shevchenko had therefore come to be seen by supporters and detractors alike as a symbol of Ukrainian nationhood.

The censorship policy was rescinded after 1905 only to be reinforced again just five years later under Prime Minister Pyotr Stolypin. This back-and-forth relationship between government authorities on the one hand and Ukrainian nationalists on the other would continue in the Soviet era. In his Kobzar poems, Shevchenko would advocate again and again for "freedom," both for himself and for his homeland.  No wonder, then, that after 1991 Shevchenko and his poems once again served as the foundation for the construction of a new Ukrainian nation. And no wonder that Maidan activists mobilized him during his bicentennial year, while ironically, Yanukovych proclaimed 2014 to be "the year of Shevchenko."  "The Complete Kobzar" helps us to understand why.

The Complete Kobzar: The Poetry of Taras Shevchenko. Translated from the Ukrainian by Peter Fedynsky.  London: Glagoslav Publications, 2013.  452 pgs.

Stephen M. Norris is Professor of History and Assistant Director of the Havighurst Center for Russian and Post-Soviet Studies, Miami University (OH).