The BBC series "Luther," written and created by Neil Cross, consists of just 14 episodes that aired in Britain between 2010 and 2013. It featured the English actor Idris Elba as Metropolitan Police Inspector John Luther. The series earned greater praise and appreciation in the U.S. where it won Elba the 2012 Golden Globe for Best Television Actor and was also nominated for four U.S. Primetime Emmys.

At the heart of the show is Elba's compelling performance as the black London detective dedicated to his job and doing the right thing even if it means continually breaking and bending the law. It is set in a London terrorized by serial killer twins, cop murderers and vigilantes. If ever there was a flip side of the eccentric, sometimes light-hearted fantasies of that other quintessential London-set television detective show "Sherlock," then "Luther" is it. Luther is a loner whose ex-wife is murdered by one of his own corrupt colleagues, and the inspector's only real friend is a sexy psychopath called Alice Morgan.

BBC dramas have been capturing the Russian public's imagination recently. "Doctor Who" enjoys such a loyal and supportive Russian following that the 50th anniversary episode — The Day of the Doctor — was simulcast in Russia on Karusel, Scary TV and at 97 cinemas across the country. Russia's most-watched channel, Channel One, was the first broadcaster to run Series 3 of "Sherlock," with the first episode airing just 15 minutes after the BBC transmission in January and two and half weeks before its American transmission on Jan. 19.

In 2012, the BBC's "Life on Mars" was remade in a Russian setting by production company Sreda for Channel One as "Dark Side of the Moon." But there was a reason why an iconic David Bowie song title was replaced by an equally iconic Pink Floyd one. This was because Bowie's "Life on Mars" would have been unknown in the Soviet Union at the time, whereas Pink Floyd's album had a large underground following. "Life on Mars" followed a modern day Manchester policeman transported to a grim and low-tech 1970s police world of malpractice and bad behavior. 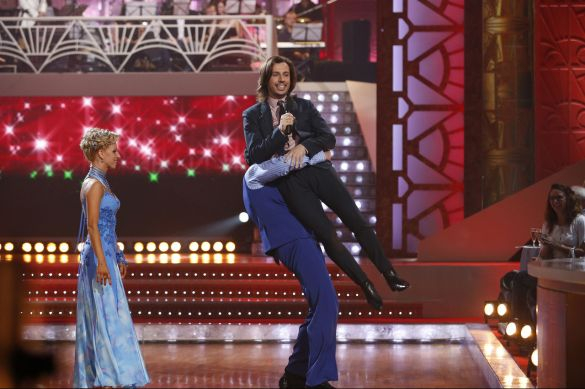 The Russian remake of "Dancing with the Stars" has had great success.

The Channel One version reframed the narrative to take Russian detective Mikhail Soloviev (Pavel Derevyanko) back from contemporary Moscow to a 1970s of Soviet communism — at one point he even encounters a younger Mikhail Gorbachev. The show was the top-rated show in its time slot on Channel One and was recommissioned for a second series.

"Luther" is to be transplanted from London to St. Petersburg as the series is set to be remade for Russian television. The show will also be produced by Sreda for broadcast on Channel One and will be retitled in Russia as "Klim." "Klim" will consist of eight one-hour episodes. Shooting starts in Russia this August for transmission in 2015.

Heike Renner, vice president and general manager of Central and Eastern Europe at BBC Worldwide, said "'Luther' has been a phenomenal success, licensed to more than 200 territories around the world and a Golden Globe winner, and we are really excited to make our first ever sale of the format."

Alexander Tsekalo, co-owner and general producer at Sreda, added his enthusiasm at the announcement, "'Luther' is such a complex, smart character who always wins out with his intuition, provocative questioning and scientific methods. Russian audiences will love it — everyone is looking for the next 'Sherlock,' and we think 'Klim,' our version of Luther, will be it!"

Other British shows that have been remade for Russia include the quiz shows "Mastermind," and "The Weakest Link," as well as the light entertainment programs  "What Not to Wear," and "Dancing with the Stars," which has run for eight series on Rossia 1, and attracted  audiences of more than 5 million. In 2009, there was even a short-lived Russian version of "Top Gear" on Ren-T. It did not prove as popular as its BBC counterpart.