Amid the turmoil as Ukraine charts a new tumultuous political course, a former Ukrainian presidential aide despised by protesters has been shot and wounded, his spokesman said Tuesday, raising fears of retaliation.

Andriy Klyuyev, who Yanukovych's chief of staff until Sunday, was wounded by gunfire on Monday and hospitalized, said his spokesman, Artyom Petrenko.

Parliament speaker Oleksandr Turchynov, who was named Ukraine's interim leader after Yanukovych fled the capital, said that a new government should be in place by Thursday, instead of Tuesday, as he had earlier indicated.

Turchynov is now nominally in charge of this strategic country of 46 million whose ailing economy faces the risk of default and whose loyalties are sharply torn between Europe and longtime ruler Russia.

Law enforcement agencies have issued an arrest warrant for Yanukovych over the killing of 82 people, mainly protesters — the bloodiest violence in Ukraine's post-Soviet history — that precipitated him fleeing the capital on Friday after signing a deal with opposition leaders to end months of violent clashes between protesters and police.

For three months, thousands of people have been protesting against Yanukovych's decision to ditch an agreement for closer ties with the European Union and turn to Russia instead, as well as against police brutality toward demonstrators.

The parliament sacked some of Yanukovych's lieutenants and named their replacement, but it has yet to appoint the new prime minister and fill all remaining government posts. Yanukovych's whereabouts are unknown. He was last reportedly seen in the pro-Russia Crimean peninsula.

The EU's top foreign policy official urged Ukraine's new government to work out a reform program so that the West could consider financial aid to the country's battered economy.

Catherine Ashton spoke on Tuesday after meeting with the leaders of Ukraine's interim authorities formed after Yanukvoych fled the capital.

A campaign for May 25 presidential elections was launched Tuesday, with Yanukovych's arch-rival former Prime Minister Yulia Tymoshenko widely seen as a top contender for the post. She was freed from prison on Saturday after spending 2 1/2 years there. Her aide said, however, that she has not yet declared whether she will run.

Opposition leader Vitaly Klitschko, the former heavyweight boxing champion, on Tuesday declared that he would be a candidate. 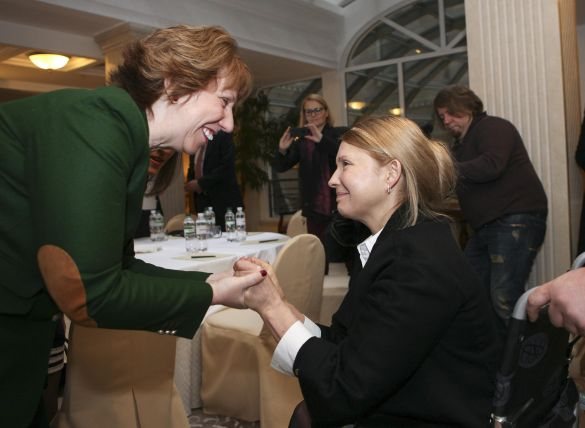 Ashton, left, greeting Tymoshenko at their meeting in Kiev on Tuesday.

Turchynov moved quickly to open a dialogue with the West, saying at a meeting with Ashton on Monday that the course toward closer integration with Europe and financial assistance from the EU were "key factors of stable and democratic development of Ukraine."

Turchynov told Ashton on Monday that Ukraine and the EU should immediately revisit the closer ties that Yanukovych abandoned in November in favor of a $15 billion bailout loan from Russia that set off a wave of protests. Within weeks, the protests expanded to include outrage over corruption and human rights abuses, leading to calls for Yanukovych's resignation.

Prime Minister Dmitry Medvedev has strongly condemned the new authorities, saying Monday they came to power as a result of an "armed mutiny" and their legitimacy is causing "big doubts." ''If you consider Kalashnikov-toting people in black masks who are roaming Kiev to be the government, then it will be hard for us to work with that government," Medvedev said.

Although Russia has questioned the interim authorities' legitimacy, European Commission spokesman Olivier Bailly referred to Turchynov as the "interim president."

Tensions have been mounting in Crimea in southern Ukraine, where Russia maintains a large naval base in Sevastopol that has strained relations between the countries for two decades. Turchynov and security chiefs expressed concern on Tuesday about "signs of separatism" and threats to the country's territorial integrity in the region.

"During the meeting, we discussed the question of not allowing any signs of separatism and threats to Ukraine's territorial integrity [meaning the events which have taken place in Crimea] and punishing people guilty of this," Turchynov's press service said in a written statement. It gave no other details.

The head of the city administration in Sevastopol quit Monday amid the turmoil, and protesters replaced a Ukrainian flag near the city hall building with a Russian flag.

The current protest movement in Ukraine has been in large part a fight for the country's economic future.

Ukraine has a large potential consumer market, an educated workforce, a significant industrial base and good natural resources, in particular rich farmland. Yet its economy is in tatters due to corruption, bad government and short-sighted reliance on cheap gas from Russia.

The public deficit is rising and the economy may be back in recession. The government burned through about a tenth of its $17.8 billion in foreign reserves last month to support the currency, which has fallen 6 percent since the protests began.