State-owned film company Mosfilm, best known for producing Soviet classics from "The Battleship Potemkin" to "Moscow Does Not Believe in Tears" celebrated its 90th anniversary this month with two weeks of celebrations and retrospective shows.

Mosfilm was founded in January, 1920 after a merger of two smaller film studios. However, the anniversary is dated from Jan 30, 1924, when the studio produced its first movie "On the Wings Skyward." Part of the Goskino state film monopoly for most of its existence, Mosfilm became a separate, partially state-run film studio, and is the only one of the old Soviet studios still producing films.

The company has a rich history of producing famous films: Just a year after its first film, the studio produced Sergei Eisenstein's 1925 work "The Battleship Potemkin," which critics generally agree to be one of the greatest films of all time. The studio also produced other works by the influential director, including "Ivan the Terrible" and "Alexander Nevsky."

In addition to Eisenstein's strident propaganda films, Mosfilm created some of the biggest hits of the Soviet era: films like "White Sun of the Desert," "Moscow Does Not Believe in Tears," and "Mimino" are still remembered by audiences to day, and have all contributed proverbs and set phrases to the Russian language. Blockbuster hits like these helped to make Mosfilm a household name and made its logo, the famous Worker and Kolkhoz Woman statue next to a Kremlin tower, universally recognized in Russia.

After the fall of the Soviet Union, Mosfilm was faced with immediate challenges in the new, competitive market, yet has managed to maintain the integrity of the studio under the leadership of director general Karen Shakhnazarov, who took over in 1998.

"If we went public as we were asked to do at the beginning of my time as director in the late 90s, we would have lost Mosfilm," Shakhnazarov told The Moscow Times. Shakhnazarov has spent about 40 years at Mosfilm, rising from young director's assistant to head of the whole company. He shot 15 movies, all of them at Mosfilm. 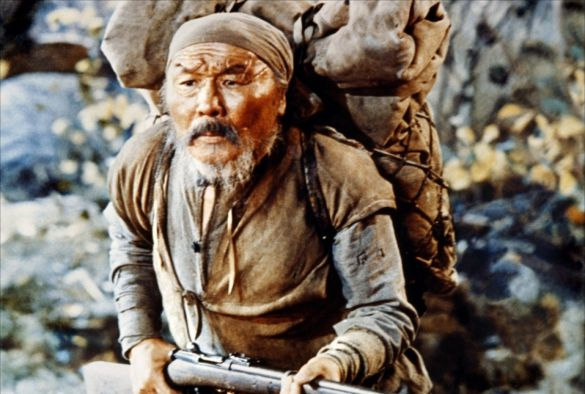 "My goal after becoming a director was very simple — to maintain Mosfilm. First of all because I have great affection for it, and also I always wanted to create the studio where I could work on my own," Shakhnazarov said.

Now, Mosfilm is still a state enterprise, but it does not depend on government. The studio has a beneficial business model, with about 70 percent of profits coming from production of new films and another 30 percent from the Mosfilm film fund, which rents Mosfilm's library of classic films to television channels, and co-production.

Shakhnazarov said the studio will stay as a state organization because it provides a good defense against excessive privatization. The studio has precious real estate, about 34 hectares of territory near the center of Moscow that could be sold for development into another enormous shopping mall. The state status helped them to maintain the integrity of the film studio.

Shaknazarov recalled that Mosfilm was earning money largely off the film fund when he first took over. Now, the studio relies heavily on its production division, though this has changed since the Soviet period: Production is now focused on television shows, made for big Russian television channels, like the talk show "Poedinok" on Rossia 1, the figure skating program "Dancing with the Stars" and the reality show "One on One" on Channel One.

The studio underwent extensive renovations in 2000 and modernized nearly all of its equipment. The reconstruction cost the studio billions of rubles and, Shakhnazarov recalled that at that time nobody believed there was a future for the Russian film industry and nobody wanted to invest in Mosfilm. Now, everything has changed and Russians are heavily investing in film technologies.

Now, Shakhnazarov says Mosfilm has state-of-the-art technology that can match even the biggest studios in Hollywood. Mosfilm has also worked to reconstruct their pavilions, which are now operating at full capacity with many clients.

Apart from technology, qualified personnel are critical to running a studio. When the Soviet Union collapsed, a generation of Russian film workers lost their jobs, and youth lost interest in studying film. Mosfilm now runs its own courses to create qualified employees and tries to encourage young directors, sometimes giving scholarships to students at VGIK, Russia's premier film school.

The studio is trying to help the Russian film industry to get back on its feet, and Shakhnazarov is confident that it will succeed. Mosfilm, like Moscow, does not believe in tears.