Russian officials have warned that the political opposition that has taken power in Ukraine consists of "illegal extremist groups" that do not represent the majority of the Ukrainian people and called on opposition leaders to abide by an earlier reached agreement.

In accordance with the European Union-mediated deal reached on Friday, opposition leaders Vitaly Klitschko, Arseny Yatsenyuk and Oleh Tyahnybok and then-President Viktor Yanukovych agreed to refrain from using violence, while anti-government protesters had to unblock roads and squares, hand over illegal weapons and vacate the public buildings they had been occupying for months.

In return for the protesters backing down, presidential elections were set to be held in December and reforms were to be made restricting Yanukovych's powers.

Those terms were not enough for some protesters, however, who demanded that Yanukovych step down immediately. By Saturday, law enforcement and government officials had apparently fled and protesters seized not only government buildings, but also Yanukovych's lavish residence.

Foreign Minister Sergei Lavrov chimed in on the situation during a phone call with U.S. Secretary of State John Kerry that same day, blaming Ukraine's political opposition for the weekend riots and criticizing the opposition for its "inability or reluctance" to honor the agreements reached between the two sides on Friday and mediated by Germany, Poland and France.

"Illegal extremist groups refuse to hand over arms and are practically taking Kiev under their control with the connivance of opposition leaders sitting in the Verkhovna Rada," the Foreign Ministry said on its website, referring to the Ukrainian parliament.

Lavrov urged the foreign ministers of Germany, Poland and France to "use their influence" to make the Ukrainian opposition "immediately fulfill" the agreement signed with the government Friday and "rein in rioting roughnecks," according to the Foreign Ministry website.

"The opposition not only has failed to fulfill any of its obligations, but is already putting forward more demands, toeing the line of armed extremists and rioters, whose actions present a direct threat to the sovereignty and the constitutional order of Ukraine," the ministry said.

"It is time to stop misinforming the international community and pretending that the Maidan of today represents the interests of the Ukrainian people," the ministry said.

Lavrov's counterparts in Germany, Poland and France responded by "promising to urgently take additional steps to secure the accomplishment of the reached agreements," the ministry said.

Mikhail Fedotov, the head of the Kremlin human rights council, on Sunday urged the Ukrainian opposition to lift the country's entrance ban for Russian human rights expert Andrei Yurov, so that human rights violations could be monitored, Interfax reported.

"Currently, it is precisely the human rights issue that has to take priority in our concern for Ukraine," Fedotov said, adding that there were many Russian citizens in Ukraine.

Despite accusing Ukraine's opposition of failing to rein in radical militants, Russia seemed eager to cooperate with the future Ukrainian government.

According to Finance Minister Anton Siluanov, Russia may continue talks about a tranche of $2 billion to buy out Ukraine's eurobonds and help the country deal with foreign debt, but only after a new government is formed and its economic policy is outlined, Interfax reported Sunday.

The tranche is part of a $15 billion bailout package from Russia to Ukraine, approved after Yanukovych backed away from a deal with the EU in November, a move that triggered the large-scale protests across Ukraine. 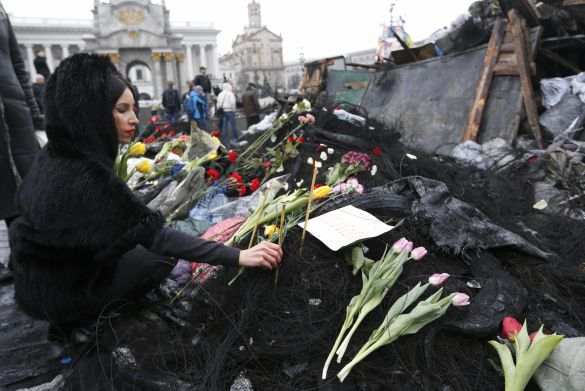 A woman placing flowers at a barricade in central Kiev in memory of the protesters killed there in the last week.

The scale of the protests has not convinced Russian officials that a change in the country's course is wanted by the majority of Ukrainians, however.

Mikhail Margelov, the head of the Federation Council's International Affairs Committee, echoed the sentiment of Lavrov, saying that protesters in Kiev did not represent the majority of the Ukrainian people.

"The Maidan and the parliamentary opposition, not to mention the militants, is not the majority of the Ukrainian people," Margelov told Interfax on Saturday, calling for a referendum to decide on the country's form of government.

Margelov said he had drawn this conclusion from taking part in a congress of governors and lawmakers from several pro-Russian regions in Ukraine's southeast in Kharkiv on Saturday.

Some 4,500 lawmakers and governors from the regions of Kharkiv, Lugansk, Donetsk, Dnepropetrovsk, Crimea and Sevastopol, representing one-third of Ukraine, attended the event, according to Alexei Pushkov, head of the State Duma's International Affairs Committee.

The congress delegates want to keep Ukraine "united," unless the country is guided by "extremist forces" who "dictate their own conditions and policy," Pushkov told Interfax after participating in the congress.

"I believe that Kiev has to hear [congress participants'] voice, otherwise a new phase of the burning political conflict will emerge, if the opinion of these regions is not taken into account," Pushkov said.

He warned the opposition leaders in Kiev not to "impose their views and approaches on all of Ukraine, especially given that these approaches are often based on de-Russification and on openly anti-Russian moods," Pushkov said.

Leonid Slutsky, head of the State Duma's CIS Affairs Committee, was more blunt than Pushkov, accusing the West of trying to sow anti-Russian moods in Ukraine.

"As much as Western politicians try to cut Ukraine off from Russia, they will not be able to drive a wedge between us or provoke a wave of mutual antagonism," Slutsky told journalists in Moscow on Sunday, Interfax reported.

Even Russian Patriarch Kirill weighed in on the situation, with calls for both the Ukrainian opposition and what was left of authorities to stop armed resistance if they were Orthodox believers, Interfax reported.

German Chancellor Angela Merkel and President Vladimir Putin agreed in a phone call on Sunday that Ukraine's "territorial integrity" must be safeguarded and that the country urgently needed a functional government.

"They underscored their joint interest in a stable Ukraine — both in economic and political terms," Merkel's spokesman Steffen Seibert said in a statement, adding they had agreed to stay in close contact.

The Kremlin said in an earlier separate statement the two leaders had spoken in a call initiated by Berlin. (Reuters)