Last week, the Moscow Planetarium opened its new exhibit, "I want to be a cosmonaut!" which hopes to inspire a new generation of Russians to devote their efforts to the nation's ailing space program.

The exhibit itself was rather spartan when compared to the Museum of Cosmonautics near the All-Russia Exhibition Center, but it offered a choice selection of interesting artifacts from the history of Soviet space exploration — such as Yury Gagarin's car, a Soyuz re-entry module, and an Orlan-T space suit. The opening even featured real cosmonauts.

However, the exhibit's interactive features are the cornerstone of its attempt to recapture the youth's attention. Throughout the exhibit, which has been set up in the planetarium's "Level 9" exhibition space, wonderful film reels provided by the Russian Federal Space Agency, or Roscosmos, are projected on the walls. Visitors are free to try on a pair of gloves similar to those on a space suit, or even try their hand at a space station treadmill.

This is all a part of the Russia's attempts to attract new talent to help save the struggling space program, which has been fighting for its life for almost 20 years now. One of the major challenges it faces is recruitment. The majority of the talent available is not only underpaid, but over the age of 60. There is a missing generation in the space industry, and finding the next generation has proven an elusive task.

But, it wasn't always this way. There was once a time where every child wanted to be a cosmonaut, space captivated the imagination of Soviet youth, and joining the space program was an illustrious ambition. The reasons were simple enough.

"Cosmonauts like Yury Gagarin and Alexei Leonov were celebrities. Star City was the place to be for big parties, and there were all sorts of rumors about the grand lifestyle of the cosmonauts, who really did lead lives of relative privilege and glamor. They could go places — into space but also abroad and into the super-secret Soviet military-industrial complex — where others simply could not," said Andrew Jenks, an expert on Soviet space history at California State University at Long Beach

But today things are markedly different. Salaries for cosmonauts are shockingly low, "especially compared to what an enterprising kid could get in a number of other seemingly mundane jobs," he said.

Also, Russians do not need to be cosmonauts to see the world anymore, anyone with a bit of cash to spend is free to come and go as they please.

In general, the reputation of the space industry has been tainted by a series of high-profile failures experienced in the last few years. "Why would one want to join an industry that pays poorly and has a growing reputation for failure?"

But the post-Soviet youth's disinterest in the space program has resulted from two concurrent factors as well.

First of all, the attention of the youth, both in the U.S. and Russia, has shifted from space to cyberspace. 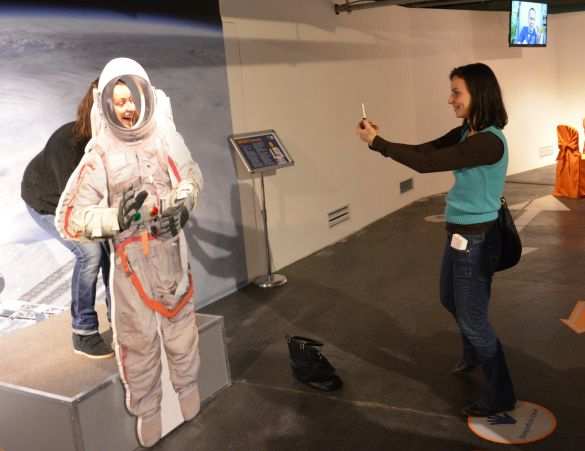 "Enterprising young people dream of building new and better worlds — or simply of making big bucks — in the Internet, not on Jupiter or Mars. Rockets and space stations no longer seem like the cutting edge of technology. If anything, they are like that Buick grandpa drives — totally uncool and clunky. People also have come to recognize the illusory nature of their utopian ideas about space exploration and colonization," said Jenks.

Additionally, the decline of the space program's popularity in the Soviet Union and post-Soviet Russia is the result of a phenomena that anthropologists label "pattern exhaustion," which "refers to the endless repetition of motifs in a piece of pottery or other artifact — to the point where all possibilities are exhausted and the tradition ends," he said.

This manifested itself in the Soviet Union when people were "confronted by another newspaper story about a world record in human time spent in space."

At the end of the Cold War and following the collapse of communism, pattern exhaustion converged with three additional challenges: the collapse of the utopian ideology and corresponding expectations that were associated with human space flight, the financial environment of the 1990s and the growing belief that the money would be best spent "on the home planet," as well as "the shift of romantic and utopian sentiments … from outer space to cyberspace."

With this in mind, it is not clear how the Russian space community will overcome this fatigue. Slava Gerovitch, an expert in Soviet space history at the Massachussets Institute of Technology, said that "Both astronauts and cosmonauts were viewed in their societies as embodiments of the core values of the opposing political systems. With the end of the Cold War, the space race lost its political rationale and along with it, its lavish funding," Gerovich said, adding that the space programs of both countries were left with a simple choice: "Either set an example of substantive international cooperation or become a showcase for nostalgic or nationalist feelings."

The exhibit, with a Soviet hammer and sickle sown on to the breast of the Orlan-T spacesuit, appears to be choosing the later sentiment. Only time will tell if resurgent nationalist sentiment can inspire this generation to once again aspire to space.

In the last month, Roscosmos has opened new accounts on Facebook and Twitter, and has begun trying to mimic NASA's successful social media efforts.

"The opening of official web pages on social networking sites will promote a dialogue between Roscosmos and citizens," Roscosmos said when the accounts opened in February. Roscosmos has even overhauled their website with a flashier, lighter and more accessible layout.

Roscosmos' latest addition is an official account on Instagram, and the first photo featured a probe from the Moscow Planetarium's exhibit. Since then they have been busy posting photos from the Baikonur Cosmodrome, and photos taken by cosmonauts aboard the International Space Station.