On Feb. 15, 1989, the last Soviet military formations departed from Afghanistan, leaving behind a country they had occupied for more than nine years and where more than 14,000 of their comrades-in-arms had died. Twenty-five years later, the Soviet Union has long since ceased to exist, and the surviving veterans of the war are divided by national borders and widely differing economic conditions.

The Soviet war in Afghanistan was controversial from the moment it was announced: Western powers denounced it as an occupation and supported the militants — a choice they would later regret — while opposition within the Soviet Union steadily grew as casualties rose and the war effort took a heavy toll on the Soviet economy.

Today, the memory of the war and the treatment of those who fought in it are still disputed matters. In honor of the anniversary, The Moscow Times looks back at some of the salient issues surrounding the Soviet war in Afghanistan.

Frants Klintsevich, head of the Union of Afghan War Veterans, recently announced that he will ask President Vladimir Putin to reconsider the "politically and legally groundless assessment of the Afghan war as a failed and reckless attempt," RT reported.

While at the time the war was widely condemned both internationally and domestically, Russian popular opinion on the Afghan War has gradually shifted over the past two decades. At a video conference dedicated to the 25th anniversary of the war organized by RIA Novosti, a brief video shown at the start of the conference said that "Afghanistan was an unpredictable and unstable neighbor" and that "a decision was taken to protect our southern border," statements that fall in line with the traditional Soviet explanation for the war and ignore the greater Cold War ramifications of the conflict.

Similar to the Vietnam War in the U.S., the Afghan War has become something of a forgotten war in the former Soviet states, and veterans have never received the same kind of adulation given to World War II veterans.

At RIA Novosti's recent video conference, all of the representatives from veterans associations throughout the former Soviet Union said their governments intended to give out special awards and medals on the anniversary of the war's end — whether these decorations will change popular opinion remains to be seen, but they seem to show changing government views on the war. 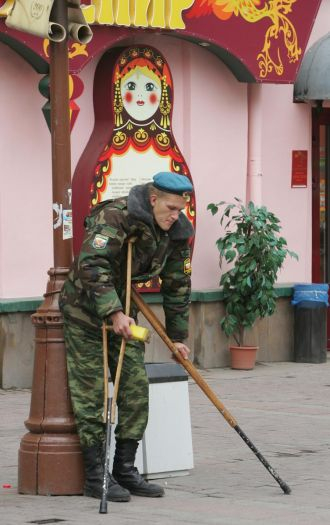 A panhandling veteran in Moscow

As the former Soviet states prepare to mark the coming anniversary with fanfare and commemorative medals, many Afghan War veterans have little to celebrate — the rapid collapse of the Soviet Union left many without work or benefits and, as with any war, many suffer from post-traumatic stress disorder and other psychological illnesses. The ranks of the homeless and destitute include many veterans, a fact that has led veteran's associations throughout the former Soviet world to lobby for increased government support for veterans.

While virtually all of the countries represented at the conference reported some effort to raise veterans' pensions, differing levels of success were reported: Kazakhstan, wealthy from oil and gas revenues, seemed most positive about their efforts to raise support for veterans, while Mikhail Mokan, leader of the Moldovan Afghan war veteran's association, said there was still "a mass of problems for veterans," adding that he was working legislation in parliament to help rectify the problem.

In Ukraine, efforts to help veterans were complicated by general uncertainty about country's future. Sergei Chervononpinsky, head of the Ukrainian Afghan War veteran's association, said: "we have already signed a memorandum with the government — which, of course, does not really exist any more — but anyway, we have the memorandum, for what it's worth."

The War That Never Ended

Nugzar Kakhnauri, chairman of the Georgian Veteran's Union, was quick to note that his country in fact still had soldiers in Afghanistan — 1,500 Georgian soldiers are still deployed in Afghanistan as part of the NATO-led security mission.

"Of course people are against it, but it is big politics," Kakhnauri said of the deployment in Afghanistan. "Again our soldiers are dying in that place … I want to ask [the government] that this end." Georgia, the largest non-NATO contributor to the security force, has lost 29 soldiers, with more than 170 wounded since their deployment began in 2001.

Veterans from other post-Soviet states were quick to criticize the NATO mission in Afghanistan, noting that the security situation was rapidly deteriorating as foreign soldiers prepare to withdraw from the country.

"The Americans, or at any rate, the Western powers, have built nothing," said Alexander Lavrentiyev, head of the Russian Union of Veterans of Foreign Wars. Lavrentiyev said the Soviet Union had built roads, factories and schools in Afghanistan, while in his opinion the NATO mission had contributed little to the country's development.

"All the problems are spreading to other countries — Tajikistan, Kyrgyzstan and Kazakhstan," Mikhail Mokan said. Lavrentiyev agreed, saying that "there is no real border with Tajikistan," and that the open border acted as a highway for narcotics and arms trafficking.

The comments about the lack of security in Afghanistan and the porous border seemed to echo the Soviet justification for intervening in the "unstable" country, reinforcing just how little the situation has changed in the past several decades.