A statue of Felix Dzerzhinsky or Iron Felix, a Bolshevik revolutionary and founder of the Cheka, the predecessor of the KGB, will not be restored to its erstwhile location on Lubyanskaya Ploshchad, the Moscow Duma's committee on monuments announced Tuesday.

"Restoration of the monument is impractical at the present time, as the matter is more of a political question that could divide society," said Lev Lavrenov, chairman of the committee, RIA-Novosti reported.

The famous sculpture, created by artist Yevgeny Vuchetich, was erected in 1958 across from the then-headquarters of the Soviet KGB on the square, which was at that time named after Dzerzhinsky. The sculpture and the iconic KGB building became a symbol of the Soviet security services, and the monument was torn down after the failure of the 1991 attempted putsch against Soviet leader Mikhail Gorbachev.

After its removal, the statue was given to the City of Moscow and eventually erected in the Muzeon sculpture park, alongside many other former Soviet monuments. Since its removal, there have been several attempts to restore the statue, all of which have met with popular opposition and protests. 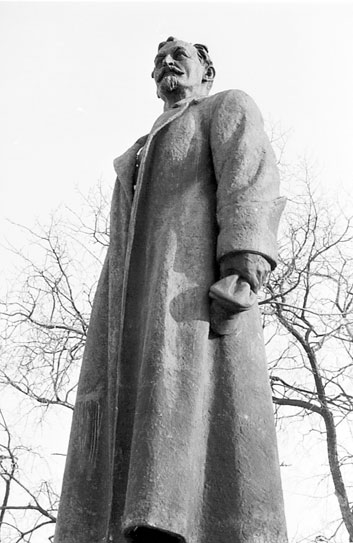 The statue at the Muzeon park

Lavrenov said that this was the fifth time since 2000 that the committee had considered the issue of the statue's restoration, and that it had unanimously rejected the idea each time.

Sergei Polovinkin, director of the preservation department of the Moscow Department of Culture, said the monument would remain in the Muzeon park outside the Central House of Artists and added that opinion seemed to be divided on the issue. "The number of letters in favor of [restoring] Dzerzhinsky is more or less the same as those against his return. This speaks to the fact that Moscow society has not yet formed one opinion about the need to make a decision right now," Polovinkin said.

According to polling conducted by the Russian Public Opinion Research Center, or VTsIOM, about 45 percent of Russians support restoring the monument to its former location, while only 25 percent were opposed. Seventy-nine percent of Russians polled knew who Dzerzhinsky was, a number that will likely decline as the Soviet past becomes more distant.