SOCHI — Walking one day through central Sochi I saw a sign for "Tolerance House." My first thought was that it was a place for gay Olympic visitors. But gays are not welcome.

Sitting in the backyard of an Evangelical church, Tolerance House is affiliated with the local Krasnodar region's Committee on Human Rights and Freedom of Thought.

A man in a black leather jacket sitting in a tiny room on the church's second floor turned out to be Ivan Chekhunov — bishop and head of the committee.

Chekhunov, a law graduate who has lived in Sochi for 40 years, said the committee's main function was to provide legal help to people who cannot afford a lawyer. The committee is internationally accredited — foreign human rights activists and prominent Russian rights organizations like the Moscow Helsinki Group show up at its occasional symposiums, he said.

"I have never received any applications from gay people, but if I did I would not consider them," Chekhunov said, adding that he supported the Russia's gay propaganda law because homosexuality contradicts his Christian ethics.

"Yes, such people do exist, but it is a shameful thing. Lots of people have various sexual disorders, but that does not mean we need to conduct propaganda for them all," he said. "They are all sins of Sodom," he added, referring to the vice-ridden city destroyed by God in the Bible.

"I do not like to talk on this topic. It annoys me," he said angrily. 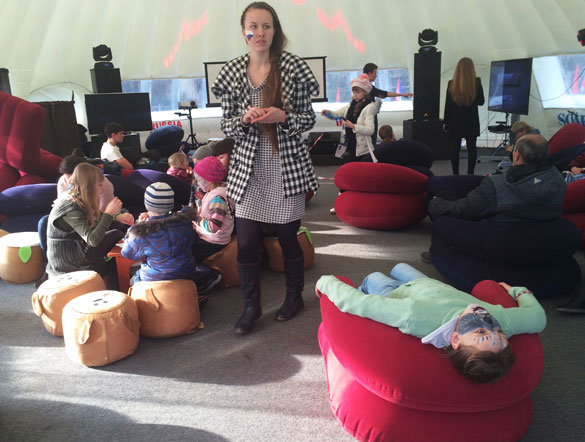 Inside a tent in the tolerance house where broadcasts from the Olympics are usually held.

Asked what were the most burning human rights issues in the Krasnodar region, he talked mostly about social rights, such as low salaries and violations of property rights. He said he could not say how many applications the committee had received recently but that the Olympics had not influenced the number in any way.

Asked about criticism from Western politicians on human rights in Russia, Chekhunov said that "they first need to look closely at the human rights situation in their own countries. Both Europe and the U.S. have more problems with human rights than Russia."

Despite the rights advocacy, Tolerance House is no dry legal bureau. The backyard was full of children playing with soap bubbles, and the organization often broadcasts sporting events, Chekhunov said.

Sochi resident Ivan, 32, came to the Tolerance House accidentally because he saw there were activities for his children there. He did not know that the place was organized by the church and the committee, he said. He declined to give his last name, without giving any reason.

"I think the situation with human rights in Russia is bad," he said, adding that criticism from the Western countries was justified. "I do not understand how all the Olympic delegations from Western countries had the courage to come here," he said.

Sergei and Galina Eksyuzyan, 55 and 58, have been visiting the church for 18 years, and were at Tolerance House with their grandchildren. They also said there were human rights violations in Sochi, but had their own understanding of the issue. "There is not enough information about God in Russia. That is the main violation," Sergei said, and read aloud a poem he wrote about Russia, stuck in sin.