SOCHI — If you are inspired by the Winter Games and want to try skiing or snowboarding yourself in Sochi, you have only one choice: the Mountain Carousel, or Gornaya Karusel, ski resort.

Mountain Carousel, located near Krasnaya Polyana, is the only local ski resort open to visitors during the Olympics, and in fine weather offers a view of a mountain landscape from a height of more than 2,000 meters.

But since it is the only available resort, prices have doubled to 3,000 rubles per day since the Olympics opened.

Most visitors were Russian speakers, and few foreign words could be heard on a weekend afternoon, even though the Russian government has tried to make Mountain Carousel one of Sochi's international ski resorts aimed mainly at foreign tourists. 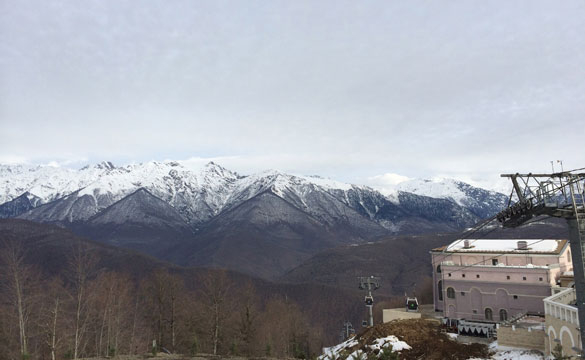 For now, it looks empty and still unfinished. As ride the ski lift, passing blue mountains covered with snow and a narrow river flowing below, you can see construction equipment and puddles of dirt scattered here and there.

"There were so many bad reports about the Olympics in the media recently. So I decided to come and look at it with my own eyes," said Ryan Blue, an English teacher from the U.S. who lives in Moscow and came to Mountain Carousel to snowboard.

"The resort is not bad, but only several tracks are open, and they are very short," he said.

Several streets of the ski resort village at the bottom of the mountain are empty as well and look more like an unfinished city project than a cozy alpine village. Most of the shops that are supposed to occupy the ground floors of the buildings remain closed, and there is a lack of places to eat.

On the mountaintop, the problem with cafes is also clear. The only indoor restaurant offers borshch for pricey 600 rubles a bowl, which is why many visitors prefer waiting in line for more than an hour for shashlik at a nearby outdoor cafe. 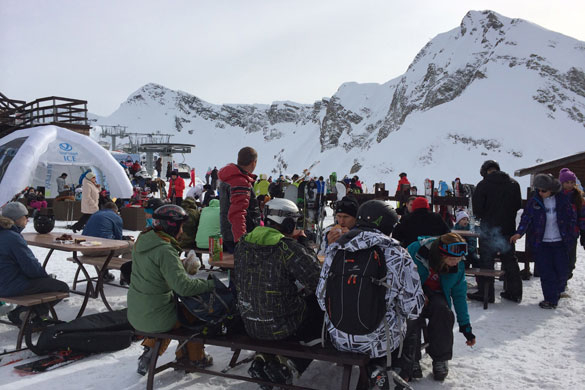 The Kazan restaurant located at the foot of the mountain had the same price range as the restaurant atop the mountain. While menus are offered on iPads, the waiter did not understand me when I tried to order, first in Russian and then in English. He appeared to be a native of the Caucasus.

Russian visitors said they saw room for improvement at Mountain Carousel. Viktoriya is a 23-year-old medical volunteer at the Olympics who arrived from the city of Krasnodar and was trying to ski for the first time. She said she did not find Mountain Carousel expensive.

"But I think there is a lack of easy tracks. It was scary for me to ski here," she said. She declined to give her last name.

Another visitor, Mikhail Razlivinsky, 32, a construction company owner from Barnaul, said the snow was too moist on some of the tracks. "I am from the Altai region, so I have something to compare this ski resort with," he said. "But it is warm here. We only have this kind of weather in March."