The Economist's Feb. 1 issue led with President Putin and the Winter Olympics as its cover story, saying that "the message of the Games is simple: Russia is back."

Western commentators never fail to mention that the Winter Olympics are a showcase for Putin's modern Russia, while highlighting Sochi's location in the war-torn and separatist North Caucasus. The more modest Commonwealth Games in Glasgow, to be held in July and August, also finds itself linked to a wider political debate and separatist movement: It will be staged less than two months before the Sept. 18 referendum that will ask the question whether Scotland wishes to remain part of the United Kingdom or become an independent nation.

Additionally, both sporting events will be used as examples of "national resurgence," eradicating memories of  the last time the Olympics were staged in Russia (1980) and the Commonwealth Games in Scotland (1986), when both were diminished by mass boycotts of competing nations. In Russia's case, the boycott was due to their invasion of Afghanistan, while the Commonwealth Games were boycotted by 32 nations due to their opposition to apartheid in sports.

The 20th Commonwealth Games will arrive in the wake of a hugely successful London 2012 Olympic Games. It can be said the London Olympics came to fruition in the right city in the right month of the right year, and the same may be true of the Glasgow Commonwealth Games — it will be happening within weeks of the Ryder Cup and the independence referendum. This prompted Lonely Planet's 2014 "Guide to the Top 10 Countries" to list Scotland 3rd, behind Antarctica and Brazil.

Glasgow will do its utmost to live up to the cliche of the "Friendly Games" over the 11 days of competition from July 23 to Aug. 3, welcoming 70 countries from the Commonwealth to compete in 17 sports.  There is yet no official number on the athletes participating, but the numbers are likely to match the 6,000 athletes who competed at the last Games in New Delhi in 2010.

Glasgow's budget is a modest £523.6 million ($859.2 million). Sochi is somewhat different. Hosting 2,900 athletes from 85 nations competing in 15 disciplines, the $51 billion spent on the Sochi Olympics makes it the most expensive sporting event in history. Yet the success of both events can only be judged in terms of ticket sales, television audiences and a final medal tally for the host nation. 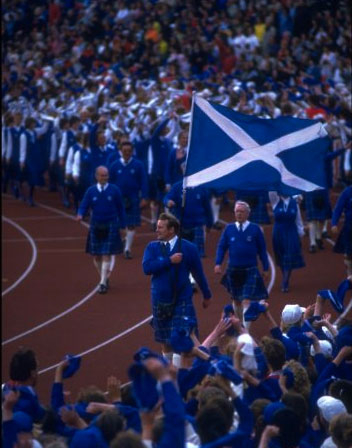 The temporary euphoria generated by these sporting blockbusters will soon evaporate. Come summer, Putin may find little afterglow as the Sochi Games become a memory, just as Scotland's SNP First Minister Alex Salmond may find the Commonwealth Games will have little impact on his party's chances of winning a "Yes" vote in the referendum — all polls still show the "No" campaign ahead, though the lead is gradually narrowing.

The closing ceremonies will not be the end of the story though, as both Britain and Russia will be turning their attention to hosting World Cups: the Rugby World Cup in England during 2015 and the FIFA World Cup in Russia three years later.

In 2015, there will be both a General Election and a World Cup in Britain during the same year for the first time since 1966.  This time, the World Cup is rugby rather than football. The 8th Rugby World Cup will kick off at Twickenham, the London home of the England team, on Sept. 18, and England will welcome 20 rugby-playing nations.

British Labour leader Ed Miliband can crack a smile because in the March 1966 election, Labour leader Harold Wilson was returned with a 96-seat majority.    England, famously, also lifted the Jules Remy trophy at Wembley on July 30.  So England and Labour supporters will also be hoping that history repeats itself next year.

In 2018, there will also be a presidential election in Russia at which Putin may or may not decide to seek a fourth term. Either Putin or a new president will then, in June and July, welcome 32 teams to play in the 21st FIFA World Cup across 11 cities including Moscow, St. Petersburg and Sochi.

The official website is already counting down the days to go. In terms of attendance and television audiences, the event is surpassed only by the Olympics and FIFA World Cup.

At the 2007 World Cup in France, 2.2 million people attended matches, whilst in the far smaller country of New Zealand in 2011, 1.4 million attended the 48 matches. Britain, with a larger population, is likely to see host venues like Twickenham, Wembley Stadium and the Olympic Stadium sold-out throughout the tournament.

Hold your breath, Britain and Russia: Despite the politics and the cost to beleaguered taxpayers, it is an exhilarating time for both nations, in the sports stadium and the political arena.