An American ballerina who experienced trouble at the Bolshoi Theater last year is hoping to find success at a different venue one month into the new year.

The theater itself is looking to move on from a year that saw it and its actors continuously in the media spotlight for the wrong reasons and, replacing one of the employees lost in the tumult, hired a new music director at the beginning of 2014 .

The Bolshoi's 2013 was bookended by an acid attack on artistic director Sergei Filin in January and December's six-year sentence handed down to soloist Pavel Dmitrichenko, after a trial that exposed a network of grievances and rivalries in the theater.

The trial was joined by another scandal in November when U.S. ballerina Joy Womack, who was the first of a new generation of Americans to study at the Bolshoi Academy and then landed a job with the professional company, accused the theater of extortion in an interview with Izvestia. Quitting the theater, she said that she was told she could pay $10,000 to perform or find a patron, some of whom sponsor top flight ballerinas in exchange for sex.

Though her comments were met by splashy headlines and harsh words from ballerinas who said she probably could not hack it at the theater, Womack was bubbly after premiering at her new venue, the Kremlin Ballet, on Sunday. Though she had almost not danced at all at the Bolshoi and her role at the theater had been described as "invisible," her Kremlin premiere saw her take the main female role of Marie in a performance of Pyotr Tchaikovsky's "Nutcracker" that was attended by outgoing U.S. ambassador to Russia Michael McFaul. 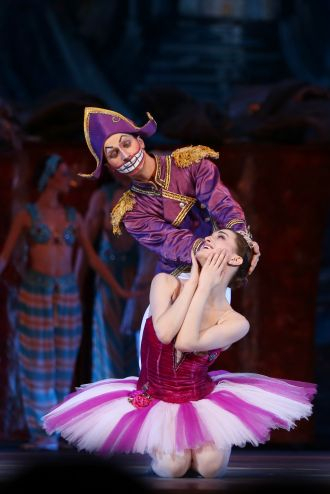 Womack performs with her troupe.

Greeting McFaul and grasping an armful of flowers backstage, Womack had lots of praise for the theater and her co-star Kirill Erlomenko, with whom she only had one day to rehearse after her original partner injured his knee before the show.

She said that the Kremlin "really is what it is about to be a Russian dancer. It is the professionalism. It is the hard work every day … It is very rare when you get such support like this."

Though her Twitter account still bears spam messages from being hacked after she made accusations against the Bolshoi, any bad blood towards the theater was hidden. She focused on how the Kremlin Ballet  "give[s] opportunities and they are really doing artistically honest work." Describing her new position as a sort of launching pad, the 19-year-old dancer hoped "to go forward and search for harder, better things."

While Womack joined a less prestigious company in hopes of restarting her career, another American and Bolshoi Academy product was looking to begin her professional career in earnest. Michigan native Precious Adams had mentioned the Prix de Lausanne ballet competition during interviews with The Moscow Times in November and had hoped that the event in Switzerland it would help her overcome a lack of stage time and racial discrimination at the academy.

Last weekend Adams won the competition's special award for contemporary dance, which provides her with an all-inclusive internship, and was placed in the competition's top six, which will give her a scholarship to join a professional dance company.

The competition, which this year received nearly 300 applications and selected Adams as one of 69 dancers to come to Switzerland, has in the past been won by future stars of international companies such as Cuban-British ballerina Carlos Acosta.