Shaun White is already one of the most successful and recognizable names in winter sports, a snowboarding rockstar just living the American dream.

The Californian was one of the stars of the last two Winter Olympics, winning back-to-back gold medals in the men's halfpipe with his gravity-defying aerial stunts.

And he seems destined to be one of the headline acts at next month's Sochi Olympics despite starting all over again with a new look, a new event and a bagful of new tricks.

"This will be my third Olympics so I know the drill about what goes on," he said. "But every single time around it is different. That is what's so exciting."

White has reinvented himself for Sochi to pursue a challenge that is a reflection of how quickly times have changed for him.

When he won his first gold medal at Turin in 2006, he was a wide-eyed teenager who had made the transition from extreme skateboarding to snow and ice.

Four years later, in Vancouver, he was the coolest cat on the mountain, winning gold in baggy denim jeans with all the fearlessness and unwavering self-belief of an athlete at the peak of his powers.

But Sochi will see a more mature version of White.

The long cherry-red locks of hair that earned him the nickname "The Flying Tomato" have been shorn, replaced by a shorter, more conservative look.

His new appearance is a clear image of where he is in life.

Now 27, he is part-athlete, part-businessman, developing an expanding portfolio of commercial interests that include his sponsorships with snowboarding manufacturers, cameras, drinks makers and clothing lines.

He has already earned riches but is not resting on his laurels, targeting not one but two gold medals in Sochi, in halfpipe and slopestyle, which has been added to the Olympic program for the first time.

Competing in both events poses a difficult challenge and not only because of the extra workload and training he needs to do.

It has also effectively doubled his number of competitors, with most of the younger, elite snowboarders choosing one or the other in the hope of toppling White.

"I cannot tell you the last time I didn't feel hunted," he said. "That was always something that inspired me." 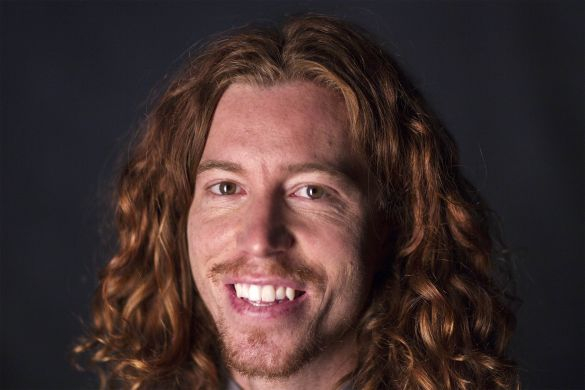 White with his formerly long locks.

White successfully completed the first part of his challenge when he qualified for the U.S. team for Sochi in both disciplines, though he cut it fine.

He suffered a heavy fall in one of his final slopestyle events and only secured his place in the halfpipe on the last day of qualifying, his relief evident in the briefest of statements posted on his Twitter account: "It's official #russiacalling."

Challenges are nothing new to White. Although he started snowboarding at six and turned professional at 13, he has endured his fair share of setbacks.

He was born with a heart defect and twice underwent surgery before he was five.

In 2004 he spent six months in rehabilitation after coming back too soon from knee surgery. In 2009, he chipped a bone in his ankle and missed most of the season.

To stay ahead of the pack, White has had to constantly refine and improve his act, coming up with more elaborate and dangerous tricks.

He has also modified his training regime. When he was younger he would spend all day on the snow but now he spends a lot more time in the gym to make sure his time on the slopes is never wasted.

"I do not feel any older but I approach competition and training a bit differently," he explained.

"My training on the mountain has changed dramatically. I used to go up on the mountain all day but I don't do that any more. I go up and ride as hard as I can for two hours then that's it.

"It is quality over quantity, that is the biggest thing for me."

White spent part of last year training in Australia, where one of his sponsors built him his own half-pipe so he could practice and perfect his new tricks.

In December, he released a tantalizing video of one of his new acts — a frontside double-cork 1440 — in which he rotates four times while doing two front flips.

In January, he performed it in competition, nailing it on the first try. White says he has some other tricks up his sleeve for Sochi.

And he is far from finished yet, already hatching plans to compete at the 2018 Winter Olympics in South Korea's Pyeongchang.

"It is hard for me to even think about anything else," he said.