President Vladimir Putin paid tribute to victims of the Siege of Leningrad on Monday in St. Petersburg and spoke to survivors who said that the name for the celebrations marking the end of the blockade should be changed.

Putin attended a ceremony at the Piskaryovskoye cemetery in St. Petersburg, which was called Leningrad during the Soviet era, on the 70th anniversary of the devastating World War II siege being lifted.

He laid a wreath at the Motherland monument and also honored his older brother, who died in childhood during the siege and is interred in a mass grave at the cemetery, the Kremlin said in a statement.

During a meeting with Putin on Monday, siege survivors complained that the name for the celebration — "the complete liberation of Leningrad from the Nazi blockade by Soviet troops" — completely neglects the role played by the city's people, Interfax reported.

Putin agreed, saying that the Red Army "without a doubt made a decisive contribution to the defense and eventual liberation of Leningrad," but that "without the civilian population … we would hardly have been able to achieve this victory." 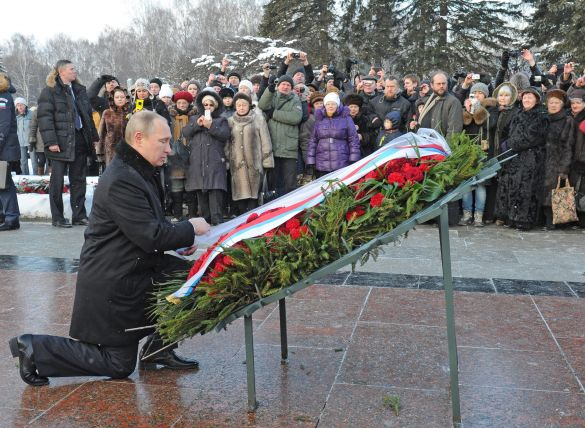 President Vladimir Putin remembers the victims of the Leningrad Siege.

Putin, who was born in St. Petersburg, called for the city's legislative assembly to rename the anniversary and, if necessary, to elevate the proposal to federal level.

On Sept. 8, 1941, the German army cut Leningrad off from Russian lines.  The city's residents struggled for almost 900 days as Adolf Hitler's troops attempted to starve them into submission. On Jan. 18, 1943, the first ray of hope appeared, when the Red Army established a single supply line to the city. Still, the blockade was not fully lifted until Jan. 27, 1944, by which time about 750,000 civilians had died.

German lawmakers have honored the victims of the Nazi army's three-year siege of Leningrad as part of this year's Holocaust Remembrance Day.

Daniil Granin, a 95-year-old Russian survivor, recounted in a speech to the German Parliament on Monday how thousands of people died of starvation each day during the harsh winters in Leningrad, now St. Petersburg.