With the opening ceremony of the Sochi Games less than two weeks away, millions of licensed Olympic products have popped up on grocery store shelves, toy stores and special retail outlets across the country.

Total sales of official Sochi goods as of early January included 960,000 Olympic plush polar bears, 2 million mugs and 3.5 million magnets, according to the Sochi 2014 Organizing Committee, which expects another 5.5 million souvenirs to be sold.

But in the merchandise department, Sochi organizers have apparently already admitted defeat to the 2010 Vancouver Games.

For an Olympics with a record cost of about $51 billion including infrastructure outlays, the organizers seem to be setting the bar low for licensing revenues. Whereas the Vancouver organizing committee brought in about $51 million in licensing money, the Sochi committee estimates earnings of only up to $30 million.

One boon to the Sochi sales numbers may be the relatively high prices set for the official Olympic apparel. On a recent weekday afternoon visit to an Olympic shop in Moscow's posh GUM Department Store, however, customers were scant.

"Tell customers that the pattern and colors of the jacket bring positive feelings," a shop assistant told a trainee. The 8,500-ruble jacket ($246) in question had a price tag equivalent to 31 percent of the average Russian's monthly salary of 27,339 rubles ($802). And its connection to good karma was purely speculative.

Other items in the Olympic store are more affordable than the technicolor Sochi dreamcoat but might still seem out of range to middle-class shoppers. The least expensive Olympic t-shirts cost 1,800 rubles ($53), while a hooded sweatshirt went for 4,950 rubles ($145).

A pair of Sochi gloves — the same gloves worn by 21,000 participants in the Olympic torch relay and 45,000 Sochi staff and volunteers — cost a more modest 500 rubles ($15). Sochi glove sightings are rare on the streets of Moscow, a contrast with the ubiquitousness of the iconic red mittens made for the 2010 Vancouver Games, 3.5 million pairs of which were sold. 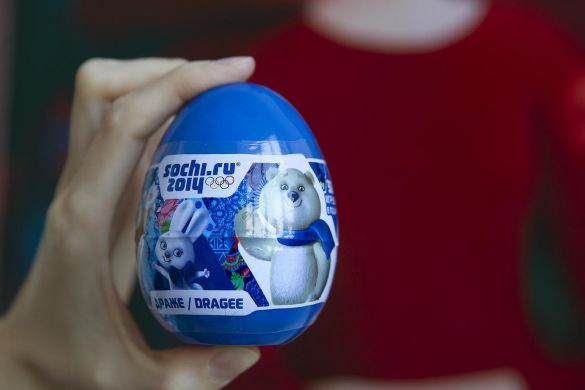 But Dmitry Chernyshenko, head of the Sochi organizing committee, praised the gloves for being a "touching embodiment of the notion of the unity of peoples around the most important sporting festival."

Official licensees pay a license fee and royalties, which can represent up to 20 percent of sales, to use the Sochi Olympic logo.

While aiming lower than the $51 million licensing haul brought in by Vancouver organizers, Sochi hopes to top the $22 million earned by the organizers of the 2006 Turin Games. The Summer Olympics, with more events and participating countries, generate significantly greater revenue: the London 2012 organizing committee made $135 million in licensing money, while the total from Beijing 2008 was $163 million.

Russian athletes have gotten into the marketing game for Olympic products, with companies hoping to cash in on their star status in the Games.

One of them is Yevgeny Malkin, the Magnitogorsk-born hockey star, who has lent his hair to the world's largest sporting spectacle. Malkin stars in a kitschy Head & Shoulders commercial, where the anti-dandruff shampoo is presented as the key to his confidence.

"It is not just the flakes we wash out. It is the confidence we wash in," says the commercial's narrator.

The face of an athlete on a bottle of shampoo, or the Olympic rings on a box of chocolates, can be determining factors in consumer behavior.

"The association between admired professional athletes and a product makes it more appealing to some people," said Edward Boches, a professor of advertising at Boston University, in a telephone interview. "The products these athletes endorse make consumers feel that they have something in common with their heroes, that they are having a connection." 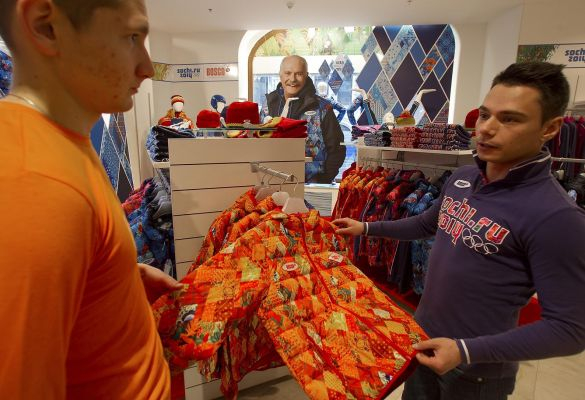 Two salespeople talking at an Olympic store in the GUM shopping center.

Those who want to experience the Sochi Olympics can display their allegiance through small items like official Olympic chocolate medals, sunflower seeds or salted peanuts. But even the most humble members of the Sochi Olympic club still pay a membership fee.

Russian consumers who do not buy the Olympic logo get 2.5 times more peanuts for four fewer rubles. But the appeal of gnawing on the official Olympic peanuts often outweighs rational cost-benefit calculations.

"Everybody wants to be part of the cultural zeitgeist of the moment," Boches said. "If someone cannot necessarily afford to attend a live event or purchase an Olympic tracksuit, they can still buy a little piece of the Games. They can still be members of the club."

All five licensees contacted by The Moscow Times were reluctant to discuss the costs and benefits of participating in Olympic consumerism.

"We participated in an open tender to become an Olympic licensee and the Organizing Committee chose our company," Alla Yashchenko, manager of the licensing division of Hatber, the Moscow-based company that makes paper products for the Sochi Games, said by telephone. "All I can say is that our company understood that it wanted to become an Olympic licensee because of the prestige it involved and for the commercial benefits it would reap."

Yashchenko would not provide the exact cost of being an Olympic licensee because of the confidentiality clause in her company's licensing agreement.

Daria Sidelnikova, general director of Polystar Global Art, which produces official Sochi ceramic and porcelain dishes, also declined to comment on the specifics of her company's licensing agreement, but said that official Sochi products have accounted for 22 percent of sales since April 2013.

Bosco, which produces official Olympic clothing, did not provide a comment in time for publication.

Given the Olympics' truly global reach — they will be seen in 123 countries and broadcast for more than 1,300 hours on Russian state television — they are seen by many companies as a golden chance to piggyback one of the world's most visible events.

"We may live in a world of fragmented media, of consumers being in control of how and when they access content or interact with brands," Boches said. "But the Olympics are one of the few events where the whole world is watching at the same time."

A Moscow Times correspondent puts Olympic peanuts to the test. Watch it here: