Soviet homemakers who endured the lines, monotony, and deprivation did, of course, still want to cook, when and if they could. "Mastering the Art of Soviet Cooking" recounts their efforts. It is not a cookbook, although it does contain a handful of recipes. Instead, it offers a multigenerational memoir in which the texture of daily life is rendered through memories of food present and food absent. The memories belong to the author, her mother, and her grandmother; the text thus spans virtually the entire Soviet era.

The book begins in the cramped Queens kitchen of the author's mother as they put the finishing touches on a pre-Soviet style feast. The menu is tzarist and opulent. There is, of course, the stereotypical caviar, as well as a cornucopia of home-cooked delights: kvass, lemon-infused vodka, crispy brains in brown butter, an opulent dessert containing a full pound of candied nuts and even — piece de resistance — a kulebiaka. 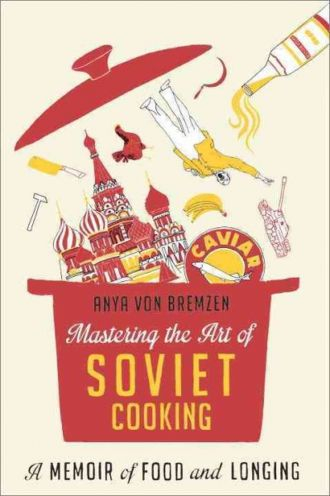 Just reading about making a kulebiaka made this cook tired. The dish requires a yeast-based pastry dough, wild mushrooms, fish, blinchiki, and perhaps — if you can get one — a sturgeon spine.  It takes a long time — and endless pots — to make.

But by the time we get to the eating of the kulebiaka, we've detoured to its description in Tolstoy and Chekhov, relived the ersatz version that regularly constituted a Sunday treat in the author's Brezhnev-era Moscow childhood, and experienced the versions shared by White Russian emigres who befriended the author and her mother after their move to Philadelphia in 1974.

We have learned that the grandmother who is enthusiastically constructing pastry dough in Queens never baked from scratch during her Soviet years. And we know that her mother, an emancipated New Soviet woman, disdained any form of cookery: "Why should I bake," she said indignantly, "when I can be reading a book?"

Successive chapters follow this ambling pattern. Each recounts a decade or so of Soviet history through a particular dish or two and the memories these foods evoke. As in the first chapter, neither the memories nor the dishes are confined to a particular person or even to the era they represent. Instead, like the kulebiaka that begins the story, the selected foods produce a layered tale in which the main era, and its dishes, are sauced and spiced with a mОlange of memories and even some bits of pure history to round out their flavor.

The result is a Proustian concoction, but with some interesting differences. The madeleine that took Proust back in time was a genuinely delicious cookie that evoked memories of equally delicious cookies eaten many years earlier. But in "Mastering," foods imagined and foods wistfully assumed to exist in the world outside the Soviet Union play roles equal to those of foods actually experienced. And the Soviet products that do evoke Proustian memories are typically industrial concoctions that, objectively, one would try hard to forget.

In sum, this book makes it clear that even a factory-produced sausage containing more filler than meat can offer up a Proustian moment. And "Mastering the Art of Soviet Cooking" itself is no ersatz food "product." It's a lovingly constructed memoir offering pleasures worthy of a kulebiaka.

"Mastering the Art of Soviet Cooking" by Anya von Bremen is an intimate memoir that transports the reader into the lost world of Soviet cuisine. The book is available from Crown Publishers for a list price of $26.00. ISBN: 978-0-307-88681-1.