Jihad is a word that in recent years has come to denote violence and hatred in most Western minds. However, in Central Asia a group of video artists has repurposed the word, using it to brand their own subversive, humorous criticisms of the overpowering central state.

“It’s like the Soviet Union in the ’50s, but with some of our own added elements of feudalism,” video artist Oleg Karpov said of present-day Uzbekistan in a lecture at the Moscow Museum of Modern Art.

Karpov is among a small group of artists who have created a branch of artistic film that they have labeled “Art-Jihad.” While the term seems to suggest a connection to Islam, a large proportion of the artists are actually ethnic Russians, and the films themselves are highly irreverent toward religion and any kind of authority, and frequently use profanity and obscenity.

Uzbekistan, and Central Asia in general, is not a region known for modern art — there are few venues that allow artists to display and promote their work, and those that do exist tend to be heavily influenced by the government.

However, a low-key series of amateur film festivals created by a couple of state museums and movie theaters proved to be small enough to fly under the radar of government censors, creating a free platform for virtually anyone to show work. Gradually, these festivals began to attract a certain clique of young videographers, who coalesced into the movement now referred to as Art-Jihad.

Karpov was able to pinpoint the precise moment when the label “Art-Jihad” came to be. “It was Nov. 17, 2007, at about 8 p.m., and I was sitting in the Beryozka bar drinking beer and discussing politics with some other artists,” Karpov said. Together, they jokingly thought up the term Art-jihad to describe their work, contrasting it with the so-called “200-dollar art” that relied on handouts from the authorities and tended to be more conservative.

This opposition to the authorities and general fringe-ness is really the only thing that unites what are otherwise very disparate artists under the label Art-jihad. Indeed, the label is largely used only by Karpov and his associates, and other artists considered to be part of the movement might not actually describe themselves using those words. 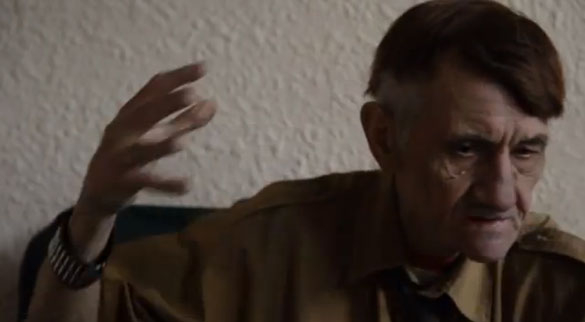 Alexander Barkovsky has gained some recognition for his humorous and absurd videos, which frequently involve nudity. In his 2007 video, “New Art,” Barkovsky paints the words “New Art” onto wet glass with his own erect penis, and also fires a water gun from his buttocks. While Barkovsky’s films generally are critical of either the state or the art world in general, they are frequently bizarre to such an extent that the criticism is very abstract.

Many of the Art-Jihad videographers are considerably more concrete in their criticism of the state, as in Seed Yanyshev’s video “There Was a General,” (General Byl) which comments on the deterioration of a historic monument in Tashkent dedicated to Russian General Mikhail Chernyayev. The film shows the monument by following an old, drunk resident of the neighborhood who slurs the tale of the general and his monument, using large amounts of profanity. One of few examples of Art-Jihad film to make it onto YouTube, the clip was briefly banned by certain Russian Internet providers, presumably due to the language.

While opposition to the state tends to be a trend in the movement, not all artists share the same political views — in fact, one artist, Vanya Maslov, uses stereotypically Nazi images of swastikas and Hitler, with little appearance of satire. Uzbek, Russian, Muslim, Christian, Fascist — the various movements represented in Art-Jihad cinema are myriad.

Indeed, the movement is so disparate that it is difficult to say for certain whether it in fact exists at all

— the festivals where these artists initially shared their videos have now largely been curtailed after attracting excessive government scrutiny, and some artists have already left Uzbekistan.

Whether the movement exists or is simply a retrospective label, in the clips of these artists one can see a rare independent voice from Central Asia — and this alone is enough to make them worth searching for.