A member of Mikhail Prokhorov's political party, Civil Platform, has been named as the business ombudsman for the city by Mayor Sergei Sobyanin, Vedomosti reported Tuesday.

Mikhail Vishegorodtsev, head of the Moscow branch of Civil Platform, was selected for the post on Monday by the mayor. Sobyanin had proposed that the party offer a candidate for the position last August, in the run up to the mayoral elections. 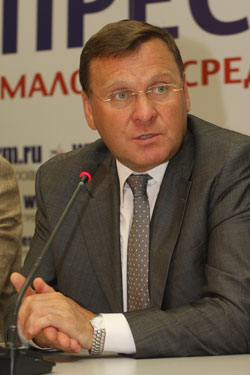 The post was created by the city parliament in October and the nomination of Vishegorodtsev has been approved by federal authorities. The Moscow business ombudsman's responsibilities will include helping draft legislation and rules; championing proposals to change or cancel rules; appealing to courts concerning the legitimacy of rules affecting businesses and the actions or inactions of officials; and keeping the authorities informed of violations of entrepreneurs' rights and legal interests.

The ombudsman will also be empowered to send recommendations to the authorities to restore violated rights of entrepreneurs; request that civil servants and officials be disciplined or found in violation of administrative and criminal codes; take part in audits of companies; participate in meetings of working groups of the city Duma, the city government and other administrative organs.

Vishegorodtsev, 53, served as a city Duma deputy from 1997 to 2005, and chaired the budget committee. He was a member of the United Russia party, responsible for questions concerning small business, tourism, consumer products and services, labor, migration and consumer protection. From 2005 to 2011, he worked at City Hall running the department for supporting small entrepreneurs.

In November 2011, he headed the Chamber of Commerce's department for developing small businesses and innovation. He joined Civil Platform in January 2013.

The head of the Russian Orthodox Church, 75-year-old Patriarch Kirill, has Covid and will self-isolate, his church said in a statement Friday. "All planned...
'heinous provocation'

Attack Kills 25 in Ukraine Ahead of Kremlin Annexation

An attack on a frontline civilian convoy killed at least 25 people in southern Ukraine on Friday, just hours before Moscow was due to annex four occupied...
rectifying mistakes

Russia is expected to annex four occupied regions of Ukraine at a lavish Kremlin ceremony on Friday that follows a threat by President Vladimir Putin to...