His novel of choice this year was Leo Tolstoy's "Anna Karenina." Tolstoy's tale of moral dilemmas and human transgressions begins with the famous line, "Happy families are all alike; every unhappy family is unhappy in its own way" — an adage that has proven true for the Putin family this year.

In June, Putin made his first public appearance in almost a year with his wife of 29 years, Lyudmila, to announce that they were filing for divorce.

Lyudmila Putina, Russia's first lady for 13 years, once called her husband a "vampire," while the "blood-sucking" Putin said that anyone who could put up with his Lyudochka for three weeks was heroic and deserved a monument.

"It was a joint decision. We hardly see each other; each of us has our own life," Putin said on Rossia 24 television.

With the ring off, auditions are now on for the coveted role of Russia's first lady.

Putin, wearing the white-and-red sportswear of the Sochi Olympics, playing with his dogs in March. (kremlin.ru)

Putin enjoys a good judo match, writing op-eds for The New York Times and rolling around in the snow with his dogs, Buffy the Bulgarian Shepherd and Yume the Japanese Akita-Inu.

And, of course, he also enjoys candlelit diners and long walks on the beach. The man does it all.

Lyudmila Putina may have been fed up with her ex-husband's exhibitionist female entourage and enamored girls' requests for the "I Want a Man Like Putin" song on the country's pop music stations.

In September, 20 dancers from Moscow's Golden Girls nightclub were featured in a 2014 "Make Love Not War" calendar to congratulate Putin on his role in preventing a U.S. military strike on Syria.

A scantily clad Miss March stood beside the calendar saying, "I will marry a peacemaker." The girls of June — contorted on sky-high heels — were quoted as saying, "The planet has been saved from war, that's something to thank Putin for."

Or maybe it was the Femen activists who prepared a bare-breasted welcome for Putin in Hanover in April that really unnerved Lyudmila?

Those who love Putin undress for him. Those who hate him also get naked. Those are the bare facts.

Putin himself has shown no inhibition toward mammalian nudity this year. While visiting a Kurgan school in September, Putin showcased his artistic talents on the classroom's white board, drawing the rear end of a cat.

The "draw me a cat's bottom" incident — albeit less poetic than the Little Prince's sheep-drawing obsession — highlighted Putin's ability to see things from another angle.

Or was it Putin's speech defect when it comes to stringing three simple syllables together — "NA-VAL-NY" — that turned Lyudmila away?

Putin's spokesman, Dmitry Peskov, famous for his auburn mustache and penchant for controversy, admitted off the record to Kommersant that the president never publicly pronounced the name of the charismatic figure of the nonsystemic opposition, Alexei Navalny, because he did not want to give his opponent undue publicity.

Or maybe Lyudmila feared that her husband's affinity for all things French had gone too far?

Putin took a liking to French joie-de-vivre in January, granting Gérard Depardieu citizenship as part of the actor's tax evasion shenanigans. Registered in Saransk, Depardieu praised Russia's democracy, Ramzan Kadyrov's leadership in Chechnya, and said he wanted to become the "tsar of Saransk."

Russia was just itching for another potbellied loudmouth with a nose for fermented drinks and PR campaigns.

But Depardieu was not the only surprise addition to Putin's extended family of disgruntled Westerners.

Edward Snowden, the former National Security Agency contractor who disclosed classified documents to the press — for Putin, a "strange guy" whose arrival was like "an unwanted Christmas gift" — is the newest member of Russia's dysfunctional expat family.

Snowden, who got a job working for an undisclosed Russian website, spent 40 days in the transit zone of Moscow's Sheremetyevo Airport before being granted temporary asylum.

Last week, the 30-year-old leaker said he would be willing to move to Brazil to help investigate NSA spying on the country. Perhaps Russian winters just aren't doing it for him. Too bad he missed that flight to Bolivia on President Evo Morales' plane.

A French clown and a "strange" American were likely not the adopted children Lyudmila had hoped for. Russia is not generally big on adoptions, anyway.

When Lyudmila thought she had seen it all, a meteor landed in the city of Chelyabinsk on a cold February morning, shattering windows and exciting foul-mouthed residents of the city whose recorded profanity was disseminated around the world. 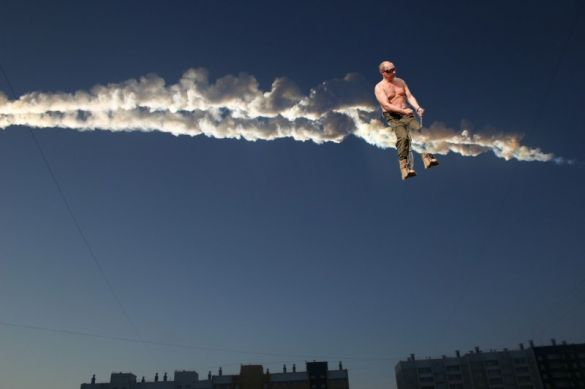 While the untamed leader of the Liberal Democratic Party, Vladimir Zhirinovsky, claimed the meteorite was actually a new weapon being tested by the United States, photoshopped images of a shirtless Putin riding the meteor in the Chelyabinsk skies went viral on social media.

But the Chelyabinsk meteor was not the end of the world. Nor did it mark the end of Putin's quirks. And the tumultuous events of 2013 are not the end for Lyudmila, either. She will not perish tragically, as Anna Karenina did, tormented by heartache and remorse.

Putin has high hopes for 2014. The Sochi Winter Olympic Games in February will give him the chance to flex his muscles in a celebration of the fabricated image the country wishes to project to the world. They also set the stage for more mishaps, embarrassments and hilarity.

Most of the freelancers run taxi, repair and delivery, marketing and real estate services.