It's unusual for a company to expand into a foreign country — perhaps especially Russia — before conquering its home market. But with Russians flocking to  Shake Shack in New York and Dubai , the popular U.S. burger chain said they realized that they had to open a restaurant in Moscow.

So Shake Shack, which traces its origins to a pushcart in New York's Madison Square Park, will open its doors on Moscow's historic Arbat street on Thursday.

"It has always been interesting for us to go somewhere sooner than other people," Danny Meyer, chief executive of Union Square Hospitality Group, which manages a number of chains including Shake Shack, said in an interview on the eve of the restaurant's opening.

Meyer, who is keen to ride what he sees as a rising tide of good food culture in the city, expects that the "fine casual" restaurant will transform the neighborhood and make Russians think differently about American cuisine.

"It reminds me of something we have experienced in New York, where there are more and more people going out to eat and more and more chefs who are well-traveled," he said.

Shake Shack has 24 restaurants in five American states as well as nine outlets in Britain, Turkey, the Middle East and Russia. Opting to come to Russia without having fully taken control of the domestic market first was an "unusual expansion plan," Meyer said, but one that might seem a no-brainer to anyone who has stood in the restaurant's long but patient lines.

Russians were visiting Shake Shack in New York and Dubai in droves. The chain's chief, Randy Garutti, said he could not walk down a street in Manhattan without hearing Russian spoken. Even his 5-year-old son's best friend was Russian. He drew the conclusion that Muscovites would not need to be coaxed into a local outlet.

The company spent almost two years looking for the right location in the Russian capital and finally settled on the Arbat, which Garutti felt was a good community gathering place for people from all demographics.

The Moscow Shake Shack will serve all of the restaurant's classics, including high-brow pooch-ini dog biscuits, as well as some items tailored to local tastes. One of these is the Meister Dog, a pork sausage topped with cheese sauce, dill pickles and shallots marinated in beer and fried. 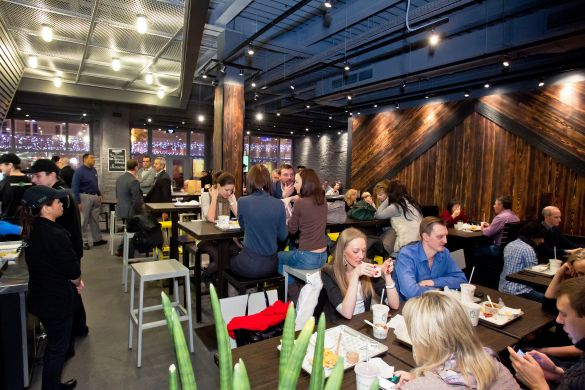 Diners enjoying Shake Shack burgers at the eatery’s pre-opening event on the Arbat on Wednesday night.

Muscovites will also get to sample two exclusive varieties of frozen custard, called Charm of the Arbat and the Great Wintry Way.

Currently, Shake Shack ships beef from Australia and some ingredients from the U.S., but the goal is to eventually use only local products.

Setting up the supply chain was one of the main challenges that the managers said they faced in opening the Moscow restaurant, just as in other international locations. The chain's culinary director traversed Moscow for more than a year, searching for local flavors, the best ingredients and suppliers.

But managers also got some pleasant surprises.

"When we first told friends that we were coming to Moscow, they said you are never going to find the kind of hospitable employees that you are known for because people do not smile enough here," Meyer said, adding that they found a lot of happy people and did not even have to train them to smile.

Shake Shack has a cult-like following in the U.S., with more than 70,000 followers on Instagram and fan couples who ask the staff to cater their weddings. Meyer and Garutti said they want the restaurant on the Arbat to become a similar gathering place in Moscow.

The Arbat restaurant has taken over the former site of the canned food store Konservy. While the shop generated lines of its own during the Soviet period, Shake Shack is expected to attract a hipper crowd.

Managers even talked of exporting the tradition for people to have snowball fights in Madison Square Park anytime it starts snowing and be rewarded with hot chocolate for their enthusiasm.

"We need to start an Arbat snowball fight," Garutti said with a laugh.

There are no additional expansion plans for Russia yet, but Meyer said they would consider opening more locations in Moscow and reaching out to St. Petersburg. This does not mean, however, that the McDonald's at the end of Arbat street should be worried.

"McDonald's does not have anything to worry about from Shake Shack … It is a different category," Meyer said. "McDonald's obviously was the pioneer in bringing the American hamburger to Russia, but they brought the fast-food experience. They did not bring the fine casual experience. Hopefully we will be able to pioneer a different way to experience a hamburger."

“Travel coincidences make it impossible to doubt the involvement of this group of poisoners,” Bellingcat, The Insider and Der Spiegel wrote.
non-compliance

The searches come ahead of a second round of nationwide rallies calling for Navalny's release.