As pro-European protesters continue to face off against riot police on Kiev's central square, a related confrontation between Western governments and Russia over the future of geopolitically crucial Ukraine is escalating, with both sides vying for the upper hand.

European Union foreign policy chief Catherine Ashton continued a two-day visit to Kiev on Wednesday, walking among the demonstrators on Maidan and meeting with Ukrainian President Viktor Yanukovych, and U.S. Assistant Secretary of State Victoria Nuland traveled to the Ukrainian capital as well in an effort to help "save Ukraine's European future."

"We also made clear that we believe there is a way out for Ukraine and it is still possible to save Ukraine's European future, and that is what we want to see the president lead, and that is going to require immediate security steps," Nuland told reporters after a two-hour meeting with Yanukovych, news agencies reported.

Meanwhile, in Russia, the State Duma issued a statement condemning Western countries for purportedly interfering in Ukraine's internal affairs and putting pressure on the country's government, echoing earlier sentiments communicated by Foreign Minister Sergei Lavrov. Russian lawmakers called on the Kiev protesters to "stop the illegal actions" that they said were destabilizing the country.

With Russia and the West dug in to their positions of trying to sway Kiev toward them, the Ukrainian government appears torn over how to proceed, and national polls show a roughly equal division in the country's population over which path to take.

Ukrainian Prime Minister Mykola Azarov said Wednesday that Ukraine was not going to discuss joining the Russia-led Customs Union at an intergovernmental meeting with Moscow next week and that talks with the EU were ongoing over an association agreement. Kiev had declined to sign a deal with the EU in late November after strong pressure from Russia.

But, speaking at a Cabinet meeting, Azarov also said Russia and Ukraine were close to a decision on bilateral trade, while Yanukovych said Tuesday that it was not possible to talk about the future of Ukraine without talking about restoring trade relations with Russia.

Azarov said that in order to prop up the struggling Ukrainian economy, the government would need 20 billion euros in financial assistance from the EU budget, presumably to compensate for revenues from trade with Russia that would be lost if the EU deal were signed.

"I want to draw attention to the motives behind the protests of our citizens," Azarov said. "Those who came to Maidan demand the immediate signing of the Association Agreement with the EU. The government also is in favor of signing the agreement as soon as possible, but we want to create conditions under which losses for the Ukrainian economy will be minimized." 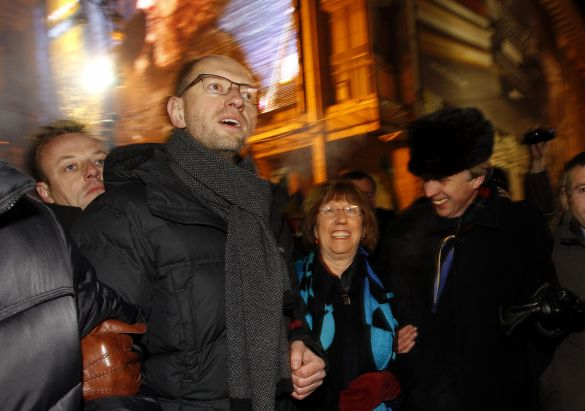 Ashton, right, on a visit to Maidan.

Azarov said European officials were "not in a hurry" to help Ukraine financially, but Reuters reported late Wednesday that the EU was holding talks with the International Monetary Fund and the World Bank on arranging assistance for Kiev were it to sign the association deal.

Ashton visited Maidan on Tuesday night and held talks with Yanukovych on both Tuesday and Wednesday, saying in a statement Wednesday that she was "impressed by the determination of Ukrainians demonstrating for the European perspective of their country."

Speaking at a news conference Wednesday, Ashton said Yanukovych had told her that the crisis in Ukraine would be resolved within 24 hours, Interfax reported. She did not elaborate.

Riot police moved to clear the protesters from Maidan overnight Tuesday to Wednesday but were repelled, and they retreated. On Wednesday evening, Yanukovych, who a day earlier in a televised meeting with three former presidents of Ukraine called the protests a "shameful page" in the country's history, called for dialogue with opposition leaders who are presiding over the protests.

Yanukovych also met Wednesday with U.S. Assistant Secretary of State Victoria Nuland, who visited protesters at Maidan earlier in the day and said it was still possible to for Ukraine to move closer to the EU.

U.S. Secretary of State John Kerry used stronger language in a statement Tuesday, saying the U.S. was disgusted by the actions of the Ukrainian authorities.

"For weeks, we have called on President Yanukovych and his government to listen to the voices of his people who want peace, justice and a European future. Instead, Ukraine's leaders appear tonight to have made a very different choice," he said, referring to the attempted clearing of Maidan by riot cops.

But Viktor Mironenko, head of the Ukrainian Research Center at the Russian Academy of Sciences, said Western politicians' statements did not represent serious pressure on Ukraine when compared to the actions of Russian authorities.

"Today, Russia announced that it would no longer buy delivery vehicles produced in Dnepropetrovsk, so both economic and political pressure on Ukraine will be continued," Mironenko said by phone. "But the pressure that started this summer has been so strong that it is difficult to imagine how much stronger it can be in the future."

Russia tightened customs controls at the Ukrainian border over the summer, signaling to Kiev that economic punishment was in store if it signed the EU deal.

Mironenko also said that even though Ukraine did need economic help, it was unlikely that the EU would provide it until the situation in the country became stable, adding that 20 billion euros was a "fantastical amount" and the mechanisms for the EU to give it were unclear.

Given the aggressive tug of war over the country, Mironenko said the future of Ukraine was unclear.

"Ukraine has turned into a reason for a fight between Russia and the West. The situation in the country could develop in a completely unexpected direction," he said.