President Vladimir Putin on Monday issued a decree ordering the liquidation of RIA Novosti, the massive state-owned news agency, and mandated the creation of a new global news agency to be headed by an aggressively pro-Kremlin television host.

In its own article about the news, RIA Novosti's English-language service said the decision signaled a strengthening of the Kremlin's grip over media in the country.

“The move is the latest in a series of shifts in Russia’s news landscape, which appear to point toward a tightening of state control in the already heavily regulated media sector,” the news service wrote.

The presidential decree came as a shock to the Russian media scene — including to RIA Novosti employees, who were not informed of their agency's reorganization ahead of time. One employee of the agency, who requested anonymity because he was not authorized to speak to the media, said the corporate New Year's party had been cancelled and that everyone was “demoralized.”

Another RIA Novosti employee said they were told that after a change in leadership over the next month, the organization could be sold off piece-by-piece to other Russian media companies.

Kremlin administration head Sergei Ivanov justified the decision to shut the agency on financial grounds, while also admitting to the “soft power” purposes behind its replacement, to be called Rossia Segodnya.

“The new agency is a more rational use of budgetary funds allocated to state information resources, and we are talking about reducing — and not increasing — funding,” Ivanov told journalists, Interfax reported.

“Russia is pursuing an independent policy, firmly protecting its national interests and explaining this to the world is not easy, but it can and must be done,” Ivanov said.

The direct translation of Rossia Segodnya is “Russia Today,” the former name of state-owned English-language television channel RT. The new agency apparently will remain separate from RT, however, while it remains unclear what languages it will publish in.

RIA Novosti is the successor of the Soviet Information Bureau, founded in 1941 to cover World World II. It has since become Russia's most prominent news agency and is considered one of the most objective media outlets in the Russian government's large array of holdings. The agency has hundreds of employees, including in 69 cities across Russia and in 49 countries.

The move to close it came as no shock to political analyst Stanislav Belkovsky, who said there had been talk within the government for almost a year of replacing RIA Novosti editor-in-chief Svetlana Mironyuk with a “harsher Putin propagandist.”

“I was not terribly surprised to hear of RIA Novosti's liquidation,” said Belkovsky, who is founder and director of the Moscow-based National Strategy Institute.

“The regime is in a state of degradation. They needed a new agency to more adequately circulate Putinist propaganda abroad,” Belkovsky said. 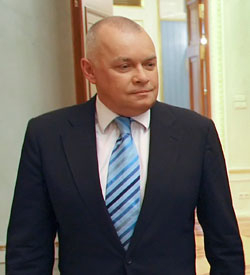 The “Putin propagandist” to replace Mironyuk will be Dmitry Kiselyov, a television host on Russia's state-owned Rossia 1, who was appointed head of the new Rossia Segodnya agency with the stated goal of “highlighting the state policies and social life of Russia abroad.”

Kiselyov is infamous for praising Stalinist politics and saying in August that the hearts of homosexuals should be “buried or burned” if they were to die in an accident.

Last week, Kiselyov raised eyebrows again by saying that Sweden, Poland, Lithuania and Ukraine had used recent anti-government protests in Kiev to “foment war with Russia.” Kiselyov argued that these foreign nations were “taking revenge” on Russia for the 1709 Battle of Poltava, in which the Russian Empire defeated Swedish forces.

“The Kremlin's direct nomination of the head of the agency inherently jeopardizes its journalistic independence,” said Johann Bihr, head of the Eastern Europe and Central Asia Bureau at Reporters Without Borders. “While we are only speaking of a 'reorganization' of the agency, the announcement does not change the Kremlin's vertical control of the media.”

Russia currently ranks 148th in Reporters Without Borders' Freedom of the Press Index, placing behind Libya, Angola and Afghanistan.

Anna Kachkaeva, dean of the media communication department at the Higher School of Economics in Moscow,  expressed her dismay at the decision, writing on her Facebook page that the appointment of Kiselyov “was a 'slap' for all critics and many dissatisfied journalists” and that the decree meant a “return to the Soviet Union” and demonstrated “a remarkable lack of understanding of the current world of communications.”

While the reorganization of RIA Novosti and the expected purge of its senior management seems to point to the Kremlin's desire to increase the loyalty of its media outlets, the agency faces similar financial challenges to those of other international news organizations, many of which have been forced to cut spending and lay off staff in recent years.

RIA Novosti's presence in 45 countries and coverage in 14 languages has come at a high cost. In 2011, the government allocated 3.15 billion rubles ($109 million) in "subsidies" for the news agency, three times more than for Itar-Tass, the country's oldest state agency, which received 1.1 billion rubles.

RIA Novosti editor-in-chief Mironyuk told The Moscow Times in 2011 that the agency would supplement its state subsidies with its own earnings, a sum equal to 25 percent of the government grants, and planned to increase its earnings share to 33 percent.

The liquidation of RIA Novosti, which had received the status of national host agency of the 2014 Sochi Winter Olympics, also raises questions about Russia's coverage of the event with its new outlet.

An International Olympic Committee representative told The Moscow Times that it was aware of Putin's decree and that it “understands it would not impact the Games' operations.” The representative did not elaborate.