KIEV — Foreign Minister Sergei Lavrov attended an OSCE summit in protest-stricken Kiev on Thursday but kept quiet about the largely anti-Russian sentiment of the protests, while Western diplomats warned of "chaos" if the Ukrainian public's demands were not taken into account.

A day earlier, Lavrov slammed some NATO members for expressing support for the protesters, who took to the streets to demand closer integration with the European Union after President Vladimir Yanukovych abruptly backtracked on signing a planned association agreement with the EU in favor of closer ties to Moscow.

While Yanukovych is away visiting China, Ukrainian Prime Minister Mykola Azarov called the protesters "Nazis, extremists and criminals" who "cannot be, in any way, our partners in 'eurointegration'," the government website quoted him telling German Foreign Minister Guido Westerwelle on Thursday after the latter expressed concern over reports of police brutality against demonstrators.

On Wednesday, Westerwelle had supported Ukrainian protesters by visiting the tent camp on Maidan Nezalezhnosti, saying the gates of the EU were still open for the country.

U.S. Assistant Secretary of State Victoria Nuland also spoke out on behalf of the protesters on Thursday, urging Ukrainian authorities to heed their demands. 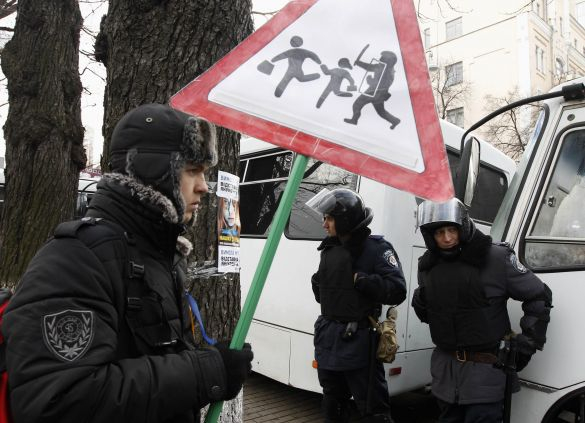 A protester holding up a sign at a rally in Kiev while police stand guard.

The protests have been compared to those of the 2004 Orange Revolution, which saw thousands camp out in the city center to demand a re-election after accusations of voting fraud. Those protests secured their desired result, and Yanukovych was ousted in favor of Viktor Yushchenko.

Protesters have been hoping for a similar situation this time around.

Hundreds of thousands of people began the "occupation" of central Kiev last Sunday against the suspension of an association deal with the EU and a crackdown on protesters at Maidan Nezalezhnosti last week. Since then, protesters have held daily rallies, seized several buildings in downtown Kiev and built barricades, demanding the resignation of Yanukovych and Azarov.

Commenting on the protests, Nuland said that Ukraine would plunge into chaos unless authorities responded to their people's expectations.

"This is Ukraine's moment to meet the aspirations of its people or disappoint them,"  she said at a meeting of the Organization for Security and Cooperation in Europe's Ministerial Council in Kiev. "Democratic norms and the rule of law must be upheld."

British Minister for Europe David Liddington echoed Nuland's comments, calling on the government to respect the freedom of assembly.

"The eyes of the world are on Ukraine today," he said.

Unlike his Western colleagues, however, Lavrov did not mention the protests, which have been regularly lambasted on Russian state television.

On the sidelines of Thursday's meeting, Lavrov indirectly referred to the unrest in Ukraine as "this situation," saying it was "linked with the hysteria that some Europeans have raised over Ukraine which, using its sovereign right, decided at the current moment not to sign any agreement which Ukrainian experts and authorities considered disadvantageous," according to Itar-Tass.