HANOI, Vietnam — President Vladimir Putin said Tuesday that his country will expand its military supplies to Vietnam, as he held talks with his Vietnamese counterpart to boost ties between the former ideological allies.

Military and energy cooperation topped the agenda during the talks between Putin and Vietnamese President Truong Tan Sang.

"We have had specific discussions on military cooperation," Putin, who was on a one-day visit, told reporters via a translator in a joint press briefing in Hanoi, Vietnam's capital. "We plan to expand the supplies of Russian military products to Vietnam."

Russia remains the main supplier of military hardware to Vietnam, and plans are being worked out to produce some military equipment in the Southeast Asian country with assistance from Russian companies.

Last week, Russia handed over the first of six diesel-electric Kilo Class submarines in a deal signed in 2009. 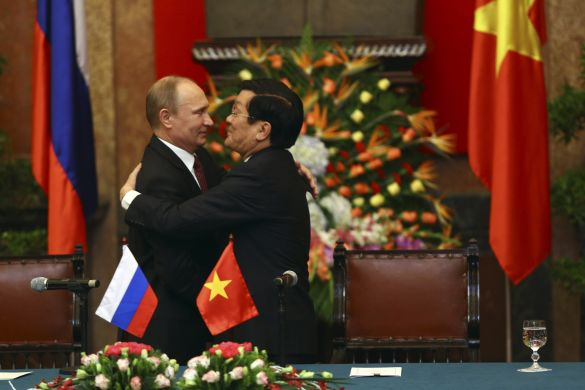 The two presidents witnessed the signing of more than a dozen agreements covering military, oil and gas, education and health care cooperation.

Sang said he and Putin had fruitful talks to bring relations between the countries forward.

"In the atmosphere of openness and trust, we exchanged views on bilateral relations and agreed on measures to further strengthen and expand the comprehensive strategic partnership between Vietnam and Russia," Sang told reporters.

In an article carried by state media on Monday, Putin wrote, "Russian-Vietnamese friendship has stood the test of time, having lived through the numerous tragic events of the 20th century and drastic changes in the world as well as in our countries."

Vietnam and Russia were close ideological allies until the break-up of the former Soviet Union in 1991. Bilateral relations warmed up after Putin first became president, and the countries signed a strategic partnership agreement in 2001.

Cooperation in energy has gone beyond the oil and gas sector. Russia's state atomic energy corporation, Rosatom, has been awarded the rights to build Vietnam's first nuclear power plant.

Putin was to travel to South Korea later Tuesday.

A French broadcaster said Putin had told Macron he would rather “play ice hockey” than decide on whether to meet Joe Biden to avert war.
chaotic shelling