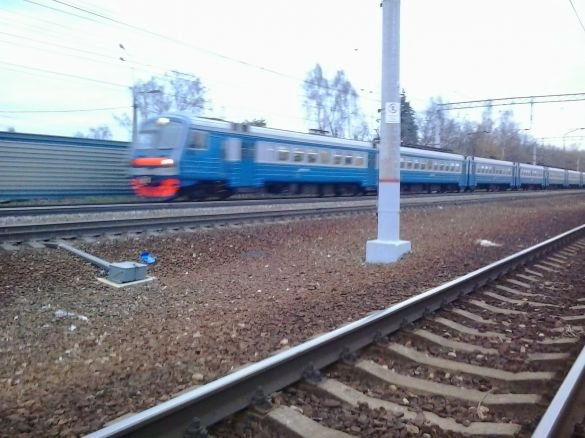 These wheels of fortune are far from reaching their final spin.

There you are, coasting into the capital city on the commuter train and suddenly your morning is interrupted by a hefty man carrying an armful of fluorescent scarfs.

With enthusiasm, he begins to describe in concise detail the merits of what you have now learned are not simply fluorescent scarfs, but Japanese bath towels.

Although to the untrained eye they might appear to be thin strips of cheap cloth, they have, in fact, been meticulously designed.

"Its proportions perfectly suited to scrub your back," the man triumphantly exclaims.

Much ado has been made about the Russian business climate and the economic prospects of this great nation. The health of small business and the middle class is a source of endless debate on the streets, in board rooms, for the talking heads on television and around the kitchen table.

Please allow this humble blogger to bring these weighty issues to rest, absolutely free of charge.

Small business in Russia is booming. This subjective and haphazard opinion is based entirely on daily observations on the Russian commuter train. Just like most of the people who live in Moscow, I don't actually live in Moscow. And like most wannabe Muscovites who have brains, I commute by train rather than by car.

I won't waste time with a language lesson. All I can say is that the Russian word for commuter train, 'electrichka', sounds rather like what you would expect the word for "female electrician" to be.

Together with literally billions of wannabe Muscovites, I make my way to the city center on the commuter train. And there I am, congratulating myself on all the time and money I am saving, while keeping my ever rebellious personal carbon footprint in check, when my tranquil journey is interrupted by The Clever Commuter Commerce of the Capital City.

Now, these interruptions usually occur only every three minutes or so. And indeed this used to be known as speculation, if you know what I mean, and the result was time spent in small quarters behind bars, if you know what I mean. But those were the days of yore, and glasnost and perestroika and all that, and here you are being blindsighted by blatant and clever commuter commerce.

You see, you thought you had everything you needed in the whole wide world utntil this peddler of fortune enters your train wagon.

Here is a small selection of what this sly speculator has on offer.

2. A lamp that can be adjusted at several angles and can be attached to your ceiling at home as a constant reminder of your dentist.

3. Entertainment. And by this I mean "live music", with the songs magically timed to last the exact distance between two train stops. 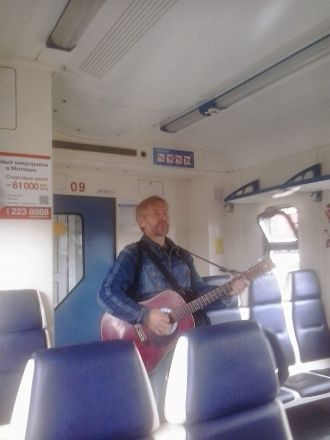 This Chuck Norris stunt double is about to make some money.

4. A piece of rubber that will stick to your car's dashboard, and will hold a lighter, pens and coins without making them sticky afterwards. Or you can stick it to a window at home, because if you had a car, you probably wouldn't be on the commuter train. This piece of rubber has the magical property of being sticky when you want it to be and not sticky when you don't want it to be.

5. Ice cream and/or pirogis. I suspect that the former will be served warm and the latter cold, despite claims made to the contrary by this merchant of fine victuals. For indeed, water follows the path of least resistance and I think the laws of thermodynamics also apply to foodstuffs in close proximity to each other in the peddler's cart.

7. Different slug repellents, that in the words of said merchant, have reached nearly Biblical plague proportions in your yard. I can say with authority that this testimony is true. Slugs have indeed taken over the yards of the Moscow region.

8. And quite possibly the hottest item of the season: a stuffed animal that will repeat any sound you make. To me it sounds very much lot like, well, a stuffed animal with a tape recorder hidden inside it, but I guess that's just my inner cynic coming out. 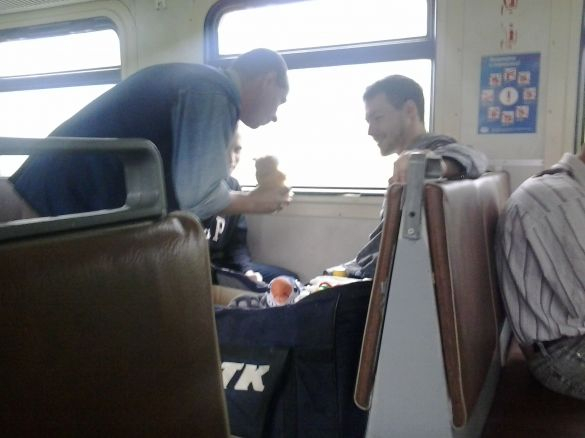 A Capital City Commuter about to acquire a recording stuffed animal.

I have also learned that these vendors of fortune all seem to follow a precise peddling pattern. A Template of Traveling Tycoons, if you will. Indeed, I am consistently amazed at the astounding results of these peddling prodigies. The magical formula is the following:

You have a problem.

In my hand I am holding the solution to said problem.

In stores this solution would cost you 500 rubles.

But today you can buy this from me for 100 rubles.

I wish you a happy journey.

Logic would seem to dictate that we, the 10,000 passengers in this particular wagon, have chosen to join this cattle car in order to save funds. And you would think we would have become resistant to the above strategy and somehow realize that the reason we are not equipped for the problems they describe, is because we never thought we had it until this moment. 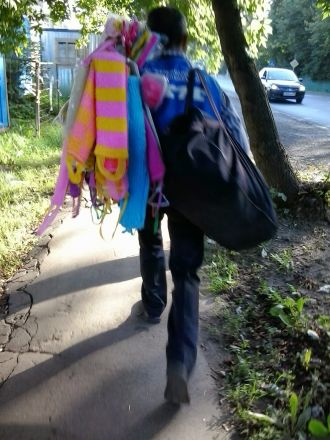 Yet no sooner does someone demonstrate the uses of a gadget we have never seen before, played a song for two minutes, or provided an eloquent discourse on the prowess of an author who up to this very moment was completely non-existent in our limited literary understanding, and we are digging away in our Russian man purses with our wallets yawning wide as we become the proud owners of, yes, a stuffed animal that will repeat any gleeful noise that we henceforth produce.

Indeed, it seems unthinkable a mobile merchant could pass through a wagon without making at least one sale.

So, sit back, relax and enjoy the show. As the train presses forward, so does the economy. Learn to appreciate the precision of these portable peddlers as they seek success on your train's wheels of fortune.

But don't get your hopes up too high.

"Ladies, please do not take what I am saying to an extreme," the Japanese bath towel merchant wisely cautions towards the end of his presentation.

"You won't burn away all your cellulite by scrubbing. But, with this towel, your skin will become more elastic and smooth."