The e-mail alarmed me.

The subject line, "Bentley V8 (penalty)," blared out from my inbox, and I quickly opened the message to find out what was wrong.

"Dear Andrew," wrote a representative of Bentley Russia. "I hope you are well! We have received penalties for speeding during the period of your test-drive (attached). We would much appreciate if we could receive payment within a week."

Facts at a Glance

The attachments included two speeding tickets, complete with grainy photos of the license number as captured by street cameras. One ticket indicated that I had driven 102 kilometers per hour in an 80-kph zone on Prospekt Marshala Zhukova. The other faulted me for going 93 kph in a 60-kph zone on Dmitrovskoye Shosse two days later. The total fine: 1,000 rubles ($30).

OK, the amount of the fine didn't alarm me. I felt embarrassed because I am a stickler for obeying traffic rules, and I had violated the law at least twice in as many days.

But if anyone is to be blamed, it is the car.

With a powerful twin-turbo 4-liter V8 engine, the Bentley Continental GT can accelerate from zero to 100 kilometers in a mere 4.8 seconds and reach a top speed of 303 kph.

But the problem — or blessing — is that the car's occupants will not notice the speed. Even as the sleek coupe quickly picks up speed, the engine emits only a soft purr under the hood. Hurtling down the road, the well-insulated cabin drowns out the cacophony of other vehicles' roaring engines mixed with the occasional honking horn and thud of tires on asphalt.

This is the reason that it was hard for me to keep track of the speed. The only clues come from the speedometer and, apparently, speeding tickets.

Bentley seems to have ample experience with speeding tickets. The penalty e-mail addressed to me also included a standardized form showing how to scan the payment receipt and send it to Bentley. Moreover, the Bentley representative offered assurances after I fired off an apologetic e-mail. "It's alright, Andrew!" he wrote back. "Right now it is almost impossible not to be caught on these cameras, especially in a Bentley."

Boasting nearly twice the horsepower of the Porsche Boxster roadster that I recently drove, the Bentley Continental GT V8 seemed built for the Moscow Raceway, the only international-level circuit in Russia.

The racetrack experience proved that the car is a tranquil rocket ship.

The weather couldn't have been worse. Rain poured down from an overcast sky as a photographer and I made our way to the Moscow Raceway on a Monday afternoon. The heavy showers severely limited our vision and turned the racetrack into a potentially slick crash course. 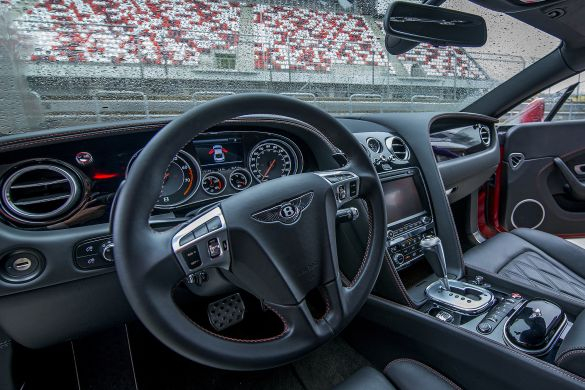 But the Bentley and its 507-horsepower engine pulled through beautifully. In fact, from behind the wheel, I didn't feel like I was driving in a rainstorm — or that the speedometer was pushing 200 kilometers per hour. While the Porsche Boxster and its 315-horsepower engine shot down the same track with an adrenaline-pumping roar, the Bentley never broke above its quiet purr. The tires clung admirably to the wet track, and I felt as safe and comfortable as at home.

Speaking about home, everything about the car reflects exquisite taste: the top-notch sound system, the high-tech electronics and the classy interior design that merges wood, leather and knurled metal.

The form-fitting tailored leather seats, which can be heated or cooled, are hard to climb out of. The two front seats even offer a built-in massage, which provided welcome relief while sitting in bumper-to-bumper rush hour on the Third Ring Road.

The near-total silence in the car's cabin can be deceiving. Unable to hear the rain, the engine or any other sounds from the street, you feel like you are silently flying through the air and the scenery is flowing by in slow motion. Several times while driving I had to brake sharply when I glanced at the speedometer and realized that the cars around me were not inching along but that I was soaring well above the speed limit.

The Bentley is definitely a one- or two-person car. While the front seats fold down to allow a passenger or two to climb into the back, the legroom at the rear is minimal, and a bump between the two backseats makes it impossible to stretch across them for a nap. Passengers might find more space in the trunk, which is a massive, lushly carpeted cavern.

The Bentley Continental GT V8 is a luxury apartment, a yacht, a private jet and a race car wrapped in one. If you buy this car, you can sell the house. With a price tag starting at $287,000, you might have to.