SOCHI — President Vladimir Putin, seeking to defuse criticism over his treatment of Russia's gay community, said all people would be welcome in the Black Sea resort of Sochi for the 2014 Winter Olympics.

Triggering angry criticism from the West and even calls to boycott the Sochi games, Russia adopted in June a ban on homosexual "propaganda" among minors, a law denounced by critics as discriminatory and aimed at stifling dissent.

"We are doing everything, both the organizers and our athletes and fans, so that participants and guests feel comfortable in Sochi, regardless of nationality, race or sexual orientation" Putin told Thomas Bach, the head of the International Olympic Committee, or IOC, on an inspection visit in Sochi on Monday.

The remark came unexpectedly from Putin, who says there is no discrimination against gays in Russia, which decriminalized homosexuality in 1993.

But gay people are often blamed for not helping overcome Russia's demographic problems and face ostracism from the resurgent Orthodox Church, which has fostered increasingly close ties with the Kremlin during Putin's 13-year rule.

Bach made no public mention of the issue, offering praise for Russia's preparations for the Olympics.

Russia is spending more than $50 billion on the February Games, a top priority for Putin who wants to use it to showcase the country's modern face to the world two decades after the fall of the Soviet Union.

"We are fully confident that the games will be on a magnificent level," Bach said in his first comments about Russia's readiness for the games.

"Sochi and the whole region completed a very big, successful development journey, and we have been deeply impressed with this path," he said in comments translated from German into Russian, as he sat next to Putin, a fluent German speaker.

The praise must have been music to Putin's ears since he has staked his reputation on the success of the games. He said Russia needed a final push to finish off preparations with just more than three months before the games open Feb. 7.

"Now that the overwhelming majority of sites are almost ready, there is a final push left, we need to accomplish this final milestone," Putin said. 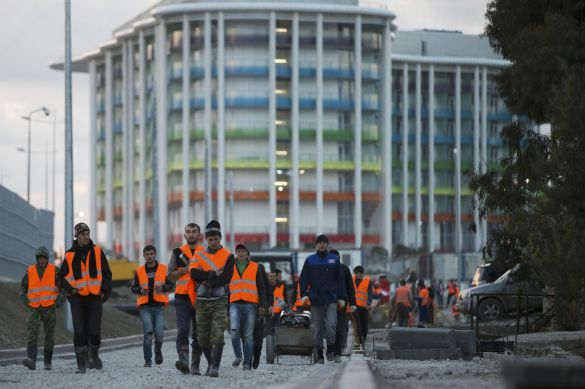 As the games near, Putin is keen to prevent controversy over repressive legislation from raining on his parade.

"We need to prepare everything once and for all."

During a previous inspection of the Olympic venues last month, Putin urged officials to overcome failures and delays in preparatory works.

Olympic preparations have been marred by over-running costs and delays and organizers have faced criticism from rights groups over the treatment of migrant workers engaged in large-scale construction works.

Moscow is also trying to head off potential security threats in Sochi, a few hundred kilometers from the volatile North Caucasus region where Russia is struggling to quell a persistent Islamist insurgency.

A deadly suicide bombing in southern Russia on Oct. 21, blamed on a Muslim woman from the North Caucasus, highlighted increased security risks in proximity to the mountainous region.

The Russian parliament has toughened punishments for those who take part in military conflicts abroad as officials estimate up to 400 people have left Russian territory to fight along with the international jihadi in Syria.

Bach urged Russia to brace itself for tough competition during the event which will challenge not only Russia's organizational skills but also its confidence in its sporting standing.

Russia came 11th in the medal standings at the 2010 Winter Games in Vancouver, with host Canada, Germany and the U.S. topping the list.

The Kremlin, disappointed with the result, pledged billions in investments and upgrades of Russia's winter sports infrastructure in preparation for the Sochi Games.

But Putin said he did not want medals to restore the country's former glory as a leading sports power.

"Great sports achievements are not a question of prestige and ambitions to us — the link between records in sports and promoting popular sports are evident," he said.